The Assembly completes its first full term, as political change gathers pace south of the border.

4 February 1969 is not a typical milestone in Northern Ireland’s history but it’s now a useful marker as the Assembly counts down to dissolution. That date, just over 42 years ago, was the last time that an elected body at Stormont successfully ended a term.

By finishing the course, this Assembly has therefore succeeded in one way, although the judgement on its achievements since May 2007 will be much more mixed. Long delays over the last four years have increased its final workload.

The draft Budget, naturally, came to the fore and was repeatedly mentioned in debates over the Budget Bill. That legislation, though, only covers the start of the next financial year; the full Budget debate is yet to begin. Sammy Wilson expected “deafening” calls for additional funding “from many quarters”.

Appropriately, members paid their tributes following the Cork air crash, on 14 February. Conor Murphy spoke of a “shared sense of tragedy and grief throughout the island”.

Members also repeated their condolences to the families of those killed in the McGurk’s Bar bombing, after the critical Police Ombudsman report into the RUC investigation. The Chief Constable’s response was “abominable and disgraceful”, according to Gerry Kelly, although other MLAs called for the IRA to be more open about its past.

A heated debate on 7 February saw the House divided on a motion to permit hare coursing. All present Sinn Féin MLAs voted in favour, along with rural members from other parties. However, the 33 ayes were outweighed by 53 noes.

Amid the twists and turns of the Justice Bill, a UUP-led objection to the definition of sectarian chanting was carried by one vote; the party said that including political chants in that wording could limit freedom of speech.

Alliance, and Free Presbyterian DUP members, sought to ban drunkenness at sports matches, but this was rejected. In one of the Assembly’s most unequal divisions, six Alliance MLAs were outnumbered by 63 others in a vote on policing and community safety partnerships. The Bill’s passage also involved a rare Wednesday sitting. 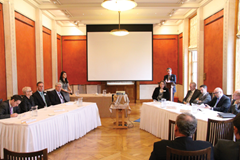 However, David McNarry’s Armed Forces and Veterans Bill was stalled by a nationalist petition of concern. Supporters said the petition could have been brought earlier, thus saving time. The UUP MLA’s Carer’s Allowance Bill did move forward, passing its second stage unopposed.

Each committee is working on its end-of-mandate report, summarising its work to date and recording any outstanding recommendations.

While hoping for a second term as Speaker, William Hay must first seek re- election to the House as a DUP candidate. Lord Alderdice has called for the automatic re-election of outgoing speakers, as happens in the Republic. This could protect the post’s neutrality but may also be seen as undemocratic.

The House’s unelected members especially need to raise their profile before putting themselves before the voters. Fourteen of the 108 MLAs are co-optees. Two of these, Billy Leonard and Simpson Gibson, are standing down.

DUP MPs Gregory Campbell and Sammy Wilson are also in the running despite the party’s pledge to stand MPs down from the Assembly “within weeks” of the 2010 general election. Both names “add to the ticket”, said a spokesman, who stated that his party had gone further than Sinn Féin and the SDLP.

The Republic’s general election increased Sinn Féin’s number of legislators across the island to 41, including Gerry Adams. Conversely, Brian Wilson is now the Greens’ sole representative in either Stormont or Leinster House.

Realistically, most business needs to be cleared well before 17 March when ministers and several other MLAs will be in Washington for St Patrick’s Day. This House dissolves at midnight on 24 March.