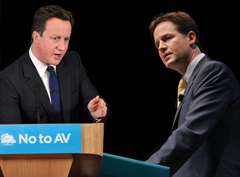 Voters across the UK are being given the opportunity to decide whether to change the system for electing MPs on 5 May. Emma Blee looks at the arguments for and against AV.

A referendum on the alternative vote (AV) system could mean we vote for MPs differently and fewer will be elected to Westminster but not everyone believes reform is necessary.

The two parties in the UK’s ruling coalition are divided over the referendum, rifts have begun within Labour and there has been disagreement between the local parties in Northern Ireland.

The Conservatives do not want to see changes to the current first-past-the-post system but conceded a vote on AV as part of their offer during negotiations to form the Coalition Government with the Liberal Democrats. Nick Clegg would like to see an eventual move towards the single transferable vote (STV).

Residents in Northern Ireland will now vote for local councils, the Assembly and in the AV referendum on 5 May. It is the first UK- wide referendum since 1975 and the first referendum within the province since the Belfast Agreement referendum in 1998.

However, setting a date was not straightforward after more than 40 Conservative MPs called for the poll to be put back, claiming that holding it on the same day as devolved elections “flouts constitutional practice”.

There was also a dispute between the Commons and Lords as to whether there should be a threshold on turnout. The Lords argued that the referendum should not be binding if less than 40 per cent of the public took part. However, MPs said they would not support the amendment and the Lords eventually backed down.

STV is used in Northern Ireland for council, Assembly and European elections but first- past-the-post (FPTP) is used for general elections.

If AV is adopted, the main difference at the polling stations during a general election would be that instead of marking ‘X’ on the ballot paper, the voter would have the chance to rank the candidates in order of

preference. A candidate must get 50 per cent of the vote in a constituency to be elected as MP.

The new law would also see the number of MPs being cut, with Northern Ireland due to lose two seats. This is part of the Government’s plans to change boundaries so that MPs broadly represent the same amount of voters.

While AV and STV are similar in their processes, the main difference is that under AV there is just one representative in each constituency compared to several under STV. Also, candidates must achieve an overall majority to clinch a seat under AV whereas they must reach a pre- determined quota under STV.

A change to the AV system is unlikely to change overall voting patterns in Northern Ireland, though. Unionists rarely transfer to nationalists and vice versa.

At present, just three countries use AV: Fiji, Australia and Papua New Guinea. In Australia, voters are obliged to rank every single candidate on the ballot paper but in the proposed UK version, all preferences are optional.

During the 2010 Australian general election, both Labour and the Liberal- National Coalition each won 72 seats, four short of the required majority, resulting in the country’s first hung parliament since 1940. Labour gained the support of one Green MP and three independents to form a minority government.

In the last UK general election, only a third of MPs (216 out of 650) had majority support in their communities, the lowest proportion in British political history. In Northern Ireland, just three MPs achieved more than 50 per cent of the vote: Gerry Adams, Sylvia Hermon and Ian Paisley Junior.

David Cameron is campaigning against any change in the current system. He argues that FPTP is a “tried and tested system” and one which provides stable government.

“When it comes to our democracy, Britain shouldn’t have to settle for anyone’s second best,” he commented.

While the Liberal Democrats would prefer to see a STV system in place, the party will be voting ‘yes’ in the referendum. Clegg commented: “When we have the chance to clean up politics and make our democracy better, we should take it.”

Ed Miliband has also backed AV but MPs within the party are split over the proposed changes. They have been allowed a free vote on the issue and many senior Labour figures are determined to block any change to the voting system. John Prescott, David Blunkett and Margaret Beckett are among those who claim AV is complicated, unfair and expensive.

Locally, the DUP is opposed to AV and views the referendum as an “unnecessary additional cost”. The party has also argued that AV “does not treat all votes equally and will further disempower voters by increasing the likelihood of hung parliaments”. The UUP is also opposed.

The Green Party is also against AV. Former MLA Brian Wilson has argued that the AV system is no fairer than the present first-past-the-post. The party prefers a mixed member proportional representation, which is used in the Scottish Parliament and the Welsh Assembly. This includes putting forward candidates on a party list.

Sinn Féin will vote for AV but would prefer to see a PR voting system being used; the party is currently exploring which type of PR would be most suitable. MP Pat Doherty said: “AV is not PR but it is an improvement of first-past-the-post. In that context, we will be advocating a ‘yes’ vote in the referendum.”

While the SDLP also favours the STV system, it has said the referendum is a “clear step forward”. Mark Durkan argues that the current first-past-the-post system “traps us into sustaining sectarian impulses in Westminster elections”.

The Alliance Party claims that AV is not as fair as STV. However, Stephen Farry believes it is a “major improvement on the first-past-the-post system, which produces unfair outcomes”.

Votes will be counted on 6 May, the day after the poll. The outcome of the referendum is expected to be announced later that evening.