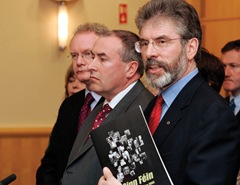 Republicans can point to successes in the peace process but their performance since devolution returned was more modest.

Sinn Féin sees Westminster elections as opportunities to build up support, as it did five years ago with an extra seat. However, the party had broadly the same number of voters as it did in 2001.

Following devolution, Sinn Féin’s real power to change policy lay in education, agriculture, transport and water. As the party abstains from Parliament, it relies on negotiations with the British Government to achieve changes in non-devolved areas such as finance, broadcasting and the peace process.

IRA decommissioning was announced on 26 September 2005 but sceptics have claimed that members continued in crime e.g. the murder of Paul Quinn in October 2007.

Sinn Féin did support civic policing, although not “political policing”, in January 2007 and justice was finally devolved last month. This also led to the end of the British army’s counter-terrorism role (August 2007). The party has continued to press for a plastic bullet ban. PSNI officers are not yet “routinely unarmed” due to the continuing paramilitary threat.

The schools brief was again taken by Sinn Féin when devolution returned but progress on its main demand – ending academic selection – has been slow due. It has, though, ended government support for the concept, leaving the new tests unregulated.

Equality is again a major theme, especially between academic and vocational subjects, and the revised curriculum aims to make both types attractive to pupils. Some work has also been undertaken on harmonising teaching qualifications across the island.

Post-school education falls beyond Sinn Féin’s remit in government. Student top- up fees remain in place, despite the party’s misgivings but it can take satisfaction in Reg Empey discussing higher education policy with the South.

Diversification and all-island working have been two high priorities for Sinn Féin in agriculture. It has continued to promote renewable energy and to press for the full ‘decoupling’ of farm subsidies.

Decoupling means breaking the link between agricultural production and entitlement to support. This has now been fully achieved. The province has remained free of genetically modified crops under Sinn Féin’s watch; the beef export ban was lifted under direct rule. An all-island animal health strategy has also been drafted.

Sinn Féin also sought to remove ‘made in the UK’ labels from northern food exports. Michelle Gildernew accepts expert advice that labelling should depend on the market, including NI, island of Ireland or UK brands.

Rural advice bureaux have not been rolled out. DARD is setting up a network of similar offices, called DARD Direct, also providing advice. It does not, though, plan to set up an early retirement scheme for farmers, as proposed by the party. Proposals for ‘clustered’ development are reflected in the PPS21 rural planning strategy.

The party viewed transport through an all- island lens, calling for harmonised transport policy, a unitary rail system and common fuel taxes. Achievements have included the approval of the Belfast rapid transit strategy, using Dublin’s experience, and continued progress on upgrading the Dublin-Belfast road route.

Sinn Féin did oppose the Westlink expansion and widening the M2 but these continued as the public-private partnership contracts were signed under direct rule. There has been no go-ahead for widening the A2 or existing roads in inner city Belfast, which was also opposed. The Regional Transportation Strategy is currently under review and the party was especially keen to improve rural public transport.

While railways have been maintained, more ambitious plans for stations at Aldergrove, Derry Airport, Belfast and Derry harbours have not come to fruition.

Vigorous opposition to water rates was pledged and the Executive has held them back. Under Sinn Féin, water and sewerage received a major cash injection in 2008-2009 (worth £335.2 million) and investment has continued. It also pledged to oppose any Water Service redundancies. Voluntary redundancies have continued at Northern Ireland Water but Conor Murphy has not imposed compulsory redundancies on the body.

Incineration, opposed by the party, is still an option for waste disposal and a plastic bag levy has not been extended northwards. The party advocates a zero waste strategy with an emphasis on councils recycling half their waste by 2010; some are nearly at that stage but others lag far behind.

Irish unity was set as a target “in our lifetime” but in the short term, Sinn Féin set out some practical aims to encourage more integration.

The Irish Government was asked to publish a green paper to explore the subject. None has been produced and the Republic has become more focused on its own economic troubles than constitutional change.

Progress has, though, been made on developing better cross-border transport along the A5 and A1. An inter-parliamentary forum is also a real possibility.

Apart from supporting bilingual translation services and schools, Sinn Féin’s progress on Irish has been limited due to unionist opposition. The party had proposed a Bill, Commissioner, college, television channel and radio station for the language but none has come about.

A late achievement came in March with a British Government promise to roll out TG4 across the North; this was followed by £20 million for Irish broadcasting.

Backing the all-island economy, Sinn Féin pointed to the benefits of one tax regime and one currency and one economic development agency, but did not foresee how the recession would change the Republic’s fortunes.

A needs-based block grant was suggested and the expected end to the Barnett formula will put this topic on the negotiating table again.

Key demands included a single equality Act and an all-Ireland anti-poverty strategy. Separate strategies do exist for North and South; a single Act has not been agreed with other parties.

An Older People’s Commissioner is due to be appointed.

Many of the party’s equality priorities can only be achieved at Westminster. Taxation was seen as biased against lower income earners, not raising enough for public services. A 50 per cent tax band for incomes over £100,000 was called for and incomes over £150,000 are now taxed accordingly. Labour has increased the minimum wage but did not devolve asylum and refugee policy to Belfast.

Although it had the choice, Sinn Féin did not take up the Health Minister’s mantle again. Its main proposals – bans on tobacco advertising, sales to under-18s and workplace smoking – have been achieved, although there are as yet no dedicated strategies for diabetes or arthritis.

Mandatory landlord registration, demanded by Sinn Féin, has been announced by Margaret Ritchie and the house sales scheme has been extended. The Department for Social Development, though, still controls housing policy despite the party’s objections.

The Assembly has not appointed a Europe minister, the two junior ministers share this brief. EU matters, mostly agricultural, are regularly discussed through the NSMC. A European Parliament office was not established locally but Northern Ireland is served through the London office.

· Small wins on unity and language

· Fairly successful in farming and transport