2019 will undoubtedly be considered one of the most transformative years in the ongoing fight against climate change.

It has been the year of Extinction Rebellion and a Swedish teen activist whose own climate strike inspired millions of young people around the globe to join in her protest against climate change.

The level and tone of this activism completely disrupted the climate change discussion. It up-ended the established debate and demanded an accelerated political response to the existential crisis of our time.

Parliaments reacted, with Westminster becoming the first, globally, to declare “an environmental and climate emergency”, followed shortly after by a similar declaration from Ireland’s Oireachtas.

The momentum of support behind this step-change in reducing our emissions was widespread, and once again the UK Government led by becoming the first G7 state to legislate to set net zero as its greenhouse gas emissions target by 2050, a move that has inspired others to begin setting their own firm legislative targets.

Regionally, the ambitious target was quickly adopted by the Welsh Assembly, while in Scotland a more ambitious target of reaching net zero five years earlier in 2045 was set. And yet, Northern Ireland remains the only devolved administration which does not have its own climate change legislation and long-term emissions targets.

True, Northern Ireland is on target to meet our 40 per cent green energy target by 2020, a target set by the Northern Ireland Executive back in 2010. According to recent data published by the Department for the Economy, 38.6 per cent of all electricity consumed here in the last year alone was from locally-sourced power across the region. Of that green generation, 83 per cent was from onshore wind turbines, including turbines at wind farms owned and operated by SSE Renewables.

Getting close to hitting our 40 per cent target is a significant achievement considering that a decade ago, just 7 per cent of all electricity in Northern Ireland was generated from renewable sources. And it means we have taken enormous strides towards ending our dependence on imported fossil fuels for most of our energy needs.

But while we should applaud our achievement at meeting our 2020 targets through the development and operation of clean generation sites across Northern Ireland, we should not think our work here is done. Indeed, we’ve still got a stretch to go, albeit not huge, to bridge the final gap and ensure Northern Ireland achieves its 2020 targets.

While maintaining a rigorous eye on hitting our 2020 milestone, we also need to drive on and agree new bold and decisive action that the climate crisis is demanding of everyone.

The UK Government has a carbon budget system that sets out its pathway and actions to reduce emissions, while our nearest neighbour, the Republic of Ireland, is defining a roadmap over the next decade to support the deployment of 70 per cent renewable electricity supply by 2030.

At SSE Renewables, we’ve been calling on policymakers here to set a new ambition for increased renewable energy production in the region. So, the news that the Department for the Economy is developing a new NI Energy Strategy to succeed the Strategic Energy Framework 2010-2020 is not only welcome, but crucially, is timely. Defining a new approach and a long-term strategic vision for the energy sector here out to 2050 will remove the policy uncertainty of the last number of years. It will also send a clear signal to investors that Northern Ireland is open once again for new renewable technology and infrastructure investments.

The creation of a new robust, future-facing energy strategy for Northern Ireland that sets out the pathway we need to follow is crucial if we are to play our part in meeting net zero by 2050. Without such a strategy, the green energy success of the past decade is unlikely to be repeated. 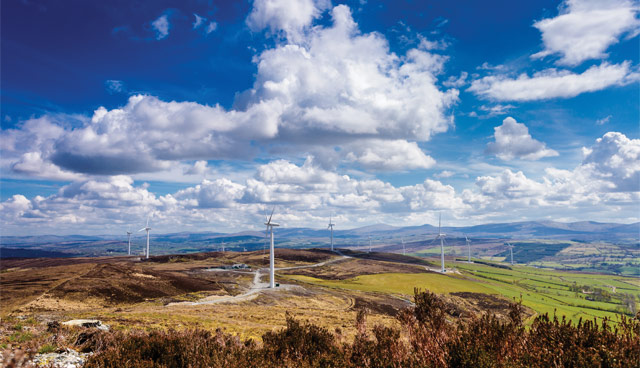 The expansion of onshore wind energy must be at the heart of any new energy policy for Northern Ireland.

Companies like SSE Renewables stand ready to play our part in meeting the new ambition we need. That’s why we’re continuing to advance the potential for new wind energy generation here, including our plans for a £150 million wind farm at Doraville in County Tyrone, which could generate up to 139MW of green electricity with the potential to power over 120,000 homes each year. In the near term, our Doraville project can bridge the final stretch to meeting our 40 per cent target and crucially, once operational, can offset over 125,000 tonnes of carbon emissions annually – making meaningful strides on behalf of Northern Ireland towards the UK’s net zero goal.

As the UK continues to lead the international transition to a low-carbon world, every one of us needs to commit to playing our part in powering the transition. We must not be complacent, nor should we limit the opportunities for a green energy revolution to other regions of the UK.

Instead, much more hard work needs to be done by everyone here in Northern Ireland, including policymakers, private businesses and individuals, to electrify our efforts to deliver the new ambitious energy strategy that Northern Ireland requires. In doing so, we can define our future glide path that will guide us, along with the rest of the UK, towards a 2050 net zero goal.

Paul Cooley is Director of Capital Projects at SSE Renewables, the owner and operator of the largest renewable energy fleet in the UK and Ireland.

The UK’s energy markets in transition