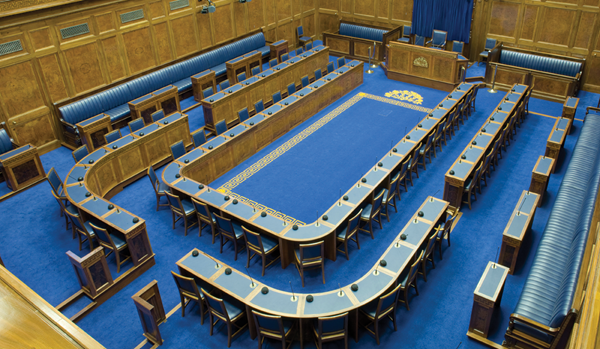 Peter Cheney looks at what a formal opposition could mean for the Assembly and the Executive’s accountability. Any change in system will depend on more trust between the parties.

Official oppositions are common in Westminster-style systems of government, providing an ‘alternative government’ for the public to elect. Introducing this model to Stormont would prove a major departure but some commentators see it as a better way to hold the Executive to account.

Prime Minister’s questions in the Commons is the model’s best known illustration. Twenty days are set aside for opposition debates and opposition parties receive an allowance – ‘Short money’ – for research, travel and running the Leader of the Opposition’s office.

There is no formal opposition in the Republic but each party leader receives an extra allowance; they scrutinise the Taoiseach at leaders’ questions. Arrangements are also informal in Edinburgh and Cardiff. All three systems use proportional representation and their style is therefore not as confrontational as the House of Commons.

Northern Ireland’s mandatory coalition is designed to include as many parties as possible.

When the current Executive was formed, 98 MLAs were ‘in government’ and the addition of Alliance brought that up to 103 out of 108. Just five MLAs therefore now sit outside government:

With five parties now in government, a PUP spokesman claimed only his party and the Greens “can be considered outside of that and as holding government to account.” Coalition government was necessary but “a more sizable opposition” would improve the system of government.

“At present too many decisions are made behind closed doors, with bargaining, trade-offs and carve-ups common place,” he added. “A larger opposition would ensure greater accountability and transparency in our government. With the people of Northern Ireland moving away from tribal politics and towards electing those who deliver for them, we stand a good chance of delivering stronger opposition after the next Assembly election.”

The United Community group formed an unofficial opposition after the 2007 Assembly election. Established on 13 March 2007, it comprised the seven Alliance MLAs, Kieran Deeny and Brian Wilson. All nine members symbolically signed the roll as ‘united community’ but they are officially classed as ‘other’.

David Ford saw it taking on the “tribal parties” and delivering a “new brand” of politics.

“People have said that they expect politicians to co-operate,” he remarked. “We have taken the first step by forming a strong, coherent and constructive opposition. We have no doubt that those who gave us our increased mandate would see this as the right thing to do.”

Ford twice described himself as ‘leader of the opposition’ in the Assembly, in February 2008 and May 2009. The group continues and aims to get the best for its MLAs in committee assignments, speaking rights and Assembly business in general.

“Parties should be able to move in and out of government and opposition depending on the political and electoral circumstances,” he suggested, as this would provide “more efficient, effective and cohesive” government.

“It would also encourage greater cooperation among parties and better promote the concept of power-sharing. No party would have an automatic right to be in the Executive, nor could the process of governing be any longer ‘held hostage’.”

Other parties needed to be persuaded as this could not be done unilaterally.

“No party seeks to be in opposition,” Farry added. “Rather that was the role that we found ourselves after the 2007 elections. We were under no illusions that it was an opposition in the sense understood in other democratic contexts.”

One of the current ‘opposition’ MLAs, Alan McFarland, thinks a formal opposition is unlikely at this stage as devolution is only now settling down.

“The difficulty with it is that the system doesn’t provide for one,” he remarked, saying that the concept was academic until an agreement to change the system was reached. The North Down MLA added: “Coming out of 30 years of conflict, it is probably too early to expect parties to agree to a change of system that could entail them being disadvantaged.”

An opposition is one of the “compelling reasons” the DUP put forward for a voluntary coalition system in its ‘Building for Success’ paper last November. That system would also reflect “normal democratic arrangements in other countries” and offer the voter a “real choice”.

The Conservatives and Unionists are also in favour, although they very much see it as a long-term goal. Their immediate priority is to return to the “inclusive Executive” envisaged by the Belfast Agreement i.e. fairer treatment for UUP and SDLP ministers.

“Over time we would like the institutions to evolve into a more normal system with a government and opposition,” the 2010 manifesto states. “But we recognise that any changes are for the future and will only come about after full consultation and with the agreement of the parties in the Assembly.”

For nationalist parties, talk of opposition brings back memories of the old Stormont Parliament and majority rule where nationalists were always out of government.

Sinn Féin and the SDLP were unavailable to comment but both parties have previously criticised moves towards voluntary coalition, believing that the current system should be given time to work. They also believe that their MLAs could be left outside a voluntary coalition, despite unionist and Alliance reassurances.

At present, the party most likely to leave government is the UUP. Basil McCrea has called for the party to make that move, as an alternative to the DUP.

The status quo argument is that parties can only effectively change policy when in government. Speaking to party activists in May 2008, Sir Reg Empey accepted there was a “very strong case” for opposition as the DUP had “failed to deliver the individual and collective accountability they promised.”

However, he pointed out that the present structures did not allow for a “formal and funded opposition”. An official opposition would need finance for researchers, official channels for legislation and properly recognised spokesmen.

A certain Ian Paisley was Stormont’s last Leader of the Opposition in 1972 and, ironically, the only holder of that post to later go into government – just over 35 years later.