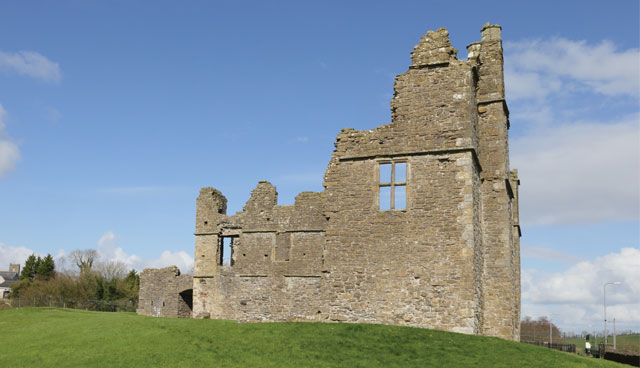 Iain Greenway, Director of Historic Environment, discusses how a move into the Department for Communities has helped in the bid to create greater social and economic value from Northern Ireland’s heritage.

Greenway explains that the switch has allowed the division to work closely with areas where it is felt Northern Ireland’s heritage assets can be better utilised including housing, regeneration, social inclusion, work and welfare. The important link with district councils was also a consideration in placing the division in the Department for Communities, given that councils’ functions include local tourism and community planning.

Under the guidance of the draft Programme for Government, the division is taking steps to achieve its overall aim, which Greenway explains is to “support and sustain vibrant communities and a strong economy through realising the significant, ongoing value of our historic environment”.

Outlining the variety of roles performed by the 120-staff division, Greenway highlights the responsibility for maintaining the list of listed buildings, commenting on planning applications which may affect listed buildings or scheduled historic monuments, licensing archaeological excavation and managing the 190 state-care monuments.

On the state-care monuments, Greenway says: “These vary from Carrickfergus Castle and Dunluce Castle down to standing-stones and earth works, all of which have been determined as being significantly special and so relocated to state ownership over the past 150 years. We’re responsible for a wide range of monuments which we maintain and make available to the public.”

Outlining ambitions to change this, he highlights that only two state-care monuments in Northern Ireland currently charge an admission fee to the public. “This is something that we’re seeking to change but on the basis that any money raised would be invested back into the sites. State-care monuments have been under-invested in for a long time and while we appreciate that resources are limited, improving the economic potential of our heritage will require initial investment.”

As an example, Greenway cites the partnership working with Mid and East Antrim Borough Council as regards Carrickfergus Castle, where the town’s visitor information centre has been relocated to the castle, with council staff managing ticketing and retail. This approach is part of a broader set of connections regarding the town, which include the Department’s Regional Development Office as well. Activity to date has included extended opening hours in the summer months, and conservation works on the town walls.

However, Greenway points out that their focus is not simply on economic matters but also on improving community cohesion. “Our heritage is unique and special but that doesn’t mean that it needs to be preserved out of touching distance. As well as attracting more visitors, we’re also exploring opportunities for spaces to be utilised to the benefits of the public. This has already proven successful in a number areas. A good example is Ballycopeland Windmill near Newtownards, where we are integrating a community centre on the site, or at Tullaghoge Fort where we worked with the council to improve access and have plans to put a children’s play park in place.

“The benefits of these may not be seen in financial figures but are key to improving wellbeing and enhancing the wider benefits of our natural and built heritage.”

A driving force for fresh impetus to improve the value of Northern Ireland’s heritage has been the recent publication of a heritage tourism framework by Tourism NI. The Historic Environment division, alongside the Heritage Lottery Fund and the Arts Council, make up the leadership group which will oversee implementation of the framework. The framework will provide a platform for optimising Northern Ireland’s involvement in the European Year of Cultural Heritage 2018. 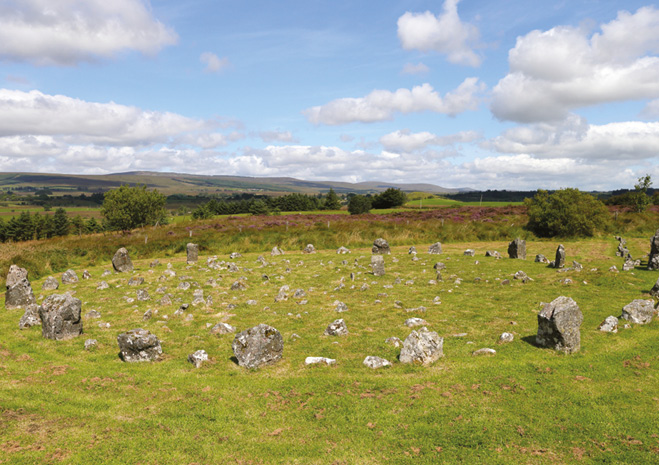 Greenway says: “The report recognises that we have wonderful natural and built heritage assets but what we have not done yet is create wonderful tourism offerings. This means packaging them into connected activities and animating the sites through interpretation and events. Instead of having people come for a one day bus tour, we can offer a packed agenda where they stay for longer.

“We see 2018 as a great opportunity to launch a new and more interactive approach to our heritage. One of the ways which we are doing this is ensuring greater collaboration between our heritage assets and the creative talent we have here in Northern Ireland, with the ability to bring some of these venues to life.”

However, he acknowledges that improving the tourism offering is only one element of improving the economic potential of Northern Ireland’s built heritage. In 2012, a report by the then Department of the Environment estimated that Northern Ireland’s built environment offered Gross Value Added (GVA) of £532 million annually. Included within this figure were places such as the Merchant Hotel, which utilised the mid-nineteenth century building formerly home to the Ulster Bank headquarters.

Greenway explains that as the value of Northern Ireland’s existing heritage becomes clearer, his division are working more and more with developers seeking to utilise Northern Ireland’s unique assets rather than plan a new build.

The push for smarter utilisation has also forced itself on to the housing agenda, where Greenway believes his division has a big role to play. “Our new home within the Department for Communities connects us tightly with the housing agenda and one of the items we have been working on is seeing where we can re-use our buildings for housing.

“It’s estimated that the carbon release from demolishing a single house is equivalent to driving around the world five times. We need to be better at improving and re-using our stock. An area where we can play a part is addressing demographic changes. We know that as the population gets older and lives longer, households are getting smaller. At the same time, in our satellite towns we are seeing more and more small retail closures. We’re looking to see where we can turn these buildings, some of which are very old, back into housing.

“People appreciate authentic buildings and they appreciate what these buildings add to places like Carrickfergus and Armagh. However, that doesn’t mean we need to wrap it in aspic and say it must never change. We’re examining the spaces where our built heritage can find a balance between complementing the area, but also adding value to the local economies and communities.”

Greenway highlights that there are wider benefits to this approach, including improving health and wellbeing. Pointing to a specific example, where a doctor’s surgery in Newtownards piloted a scheme where heritage site visits were offered to some patients on prescription, Greenway says: “There is strong evidence that our unique heritage has the potential to improve people’s pride in their local community and as a result improves wellbeing generally. We’re working with our colleagues in health to better capture the health benefits associated with our heritage, improving mental health and mental resilience through greater connection to our sites.

“This can come in the form of a visit but, going back to the DfC agenda, can also be through volunteering. The Department’s Work and Wellbeing division have consulted with us about initiatives in the heritage sector for getting people closer to the workplace. The potential economic and societal benefits that can come from this are significant and something we’re actively exploring.”

As well as a significant consultation role within the planning process, the division is also in the process of completing the second survey of listed buildings in Northern Ireland, the first survey having been originally carried out in the 1970s.

Buildings are listed on the basis of whether they have special archaeological or historic interest and when listed, the planning authority has to give particular consideration to their heritage when determining planning applications. Currently there are around 8,000 listed buildings in Northern Ireland.

Greenway explains that his division works constructively with local councils and developers to facilitate their desired outcome, while also ensuring that the heritage is maintained. “Our approach has meant that we have developed a good relationship with the local planning authorities. While our overall aim is to protect our built heritage, we’re not against alteration or re-development that can provide social and economic benefits. Our division works closely with councils to understand what it is that is trying to be achieved and does a lot of early engagement advising on the best way to respect and add value to our heritage buildings.”

Greenway describes the division’s workload of consulting on around 3,500 planning applications per year as a “constant conveyer belt”. Until recently, the division’s response rate within the target 21 days was 90 per cent; however, that level of efficiency has dipped. Addressing this, Greenway points to the loss of a number of key and experienced staff as being a key factor. 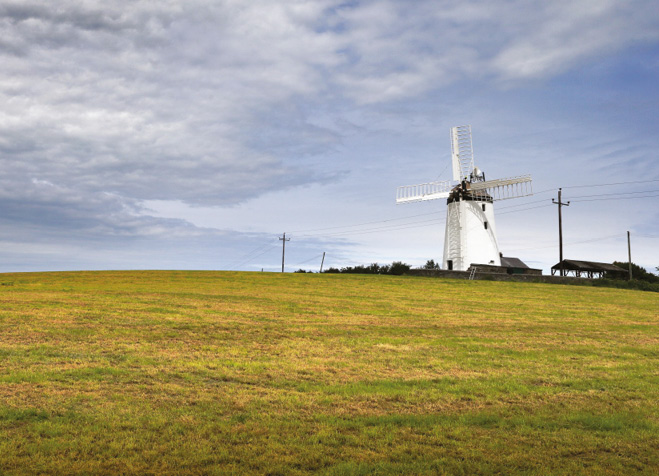 Looking forward in to 2018, Greenway believes that the volume of planning applications on which his division must be consulted will remain to be challenging but also sees greater opportunity. Explaining that a strong local economy has seen greater interest in listed sites, he is positive about the opportunity to help inform and shape an innovative approach to heritage.

He adds: “I think probably our area of greatest potential looking forward to next year will be within the housing agenda of DfC. Housing is a key capital expenditure item for the Department and we have an opportunity to help in the pressures in the social housing sector, while connecting re-generation with our heritage rich towns.

“Lastly, we will be looking to drive our own assets and package together the density of offerings that we have. However, this will need significant investment and so this will be a big challenge as overall budgets decline.”

Greenway explains that while there is a difficulty in measuring the added societal value of their work in the coming years, one target that has been established is the ambition for state-care monuments to be generating £2 million by 2020, not solely through entrance fees but incorporating merchandising, value added services and event hire.

He concludes: “Our heritage is a massive asset in Northern Ireland and there remains a lot of untapped potential. We know from figures that visitors tend to spend more and stay longer when visiting for heritage. With some of the largest sites such as the Giants Causeway now at capacity, we see a real opportunity to connect our portfolio and ensure a greater spread of visitors across Northern Ireland.

“However, we won’t do this in isolation. The challenge will be in promoting our lesser known sites and we’re already working on ways we can do this by connecting with council assets for example, such as our greenways and water courses.”

In January the division will launch a programme of events to mark the European Year of Cultural Heritage 2018. 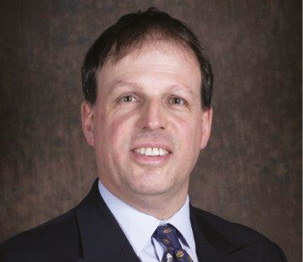 Prior to taking up his role as Director of Historic Environment, Greenway trained as a land surveyor, working in Britain and Ireland (including consultancy work in Eastern Europe and Africa) before becoming Chief Executive of the Ordnance Survey of Northern Ireland (2006-2008). He was later responsible for rate collection and land registration in Northern Ireland and then for the implementation of Northern Ireland’s road safety strategy.