A new action plan on waiting times is at high risk of delay as the hospital waiting list crisis in Northern Ireland’s health service looks set to intensify.

The Department has identified a significant number of the priorities set out in the New Decade, New Approach document as high risk for anticipated delay in delivery. As well as the development of a cancer strategy and an action plan on waiting times, it also expects to miss its target to have no one waiting over a year at 30 September 2019 for outpatient or inpatient assessment/treatment still waiting by March 2021.

A waiting list crisis in Northern Ireland preceded the outbreak of the Covid-19 pandemic and it is now understood that efforts to tackle the virus will further compound the existing problems.

Health Minister Robin Swann has indicated his belief that efforts to restore the health and social system operations to pre-Covid-19 levels will not be enough, stating in the Assembly that waiting lists that had been “unacceptable” before Covid-19 were “even more horrendous now”.

A strike by healthcare workers in Northern Ireland in early 2020 over pay and working conditions was seen as a key element of the decisions by parties in Northern Ireland to return to power-sharing. The New Decade, New Approach deal which saw the Executive reformed included a number of key promises in relation to a failing health system and the need for significant transformation. Many of these promises are now expected to be delayed following the turning of attention from policy makers and the health service to the outbreak of Covid-19.

The full impact of the Covid-19 pandemic on the health service still remains to be seen but cause for concern lies in statistics prior to the pandemic outbreak, which paint a bleak picture of the levels of delays in the system.

Figures released by the Department of Health for the three months leading up to 31 March, which do not factor in most of the Covid-19 crisis period, show that over 307,000 people were still waiting for a first appointment with a consultant, a rise of over 18,000 (6.3 per cent) people at the same time last year.

These figures far exceed the 2019/20 ministerial target which outlined an ambition that by March 2020, at least 50 per cent of patients should wait no longer than nine weeks for a first outpatient appointment and no patient should wait longer than a year.

Similarly, waiting times for inpatient and day case admission failed to meet the ministerial target of at least 55 per cent of patients waiting no longer than 13 weeks, with no patient waiting for a year.

The curtailment of elective and diagnostic services will undoubtedly have adverse impacts on the already extensive waiting lists.

Outlining the scale of the challenges facing the health service and his plan to rebuild services, Health Minister Robin Swann says: “We faced huge strategic challenges prior to Covid-19, which included an ageing population, increasing demand, long and growing waiting lists, workforce pressures, the emergence of new and more expensive treatments and ongoing budget constraints. These challenges have been compounded by Covid-19.” 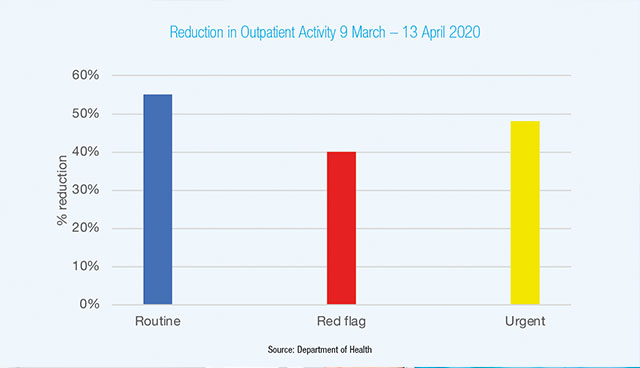 The Department of Health estimates that the downturn in secondary care activity has caused significant growth of waiting lists in most areas. The exception is that of urgent inpatient waiting lists, where a reduction of 1 per cent has been recognised. The Department believes that:

• the routine inpatient waiting list has grown by 5 per cent;

• the urgent inpatient waiting list has grown by 31 per cent; and

• the routine outpatient waiting list has grown by 4 per cent.

Projections by the Trusts suggest that the six weeks to June resulted in similar reductions in activity, which is expected to further impact on waiting lists. Also noteworthy is the fact that growth figures are based on the data available on 1 April, and do not factor in the trend of steadily increasing waiting lists, even in the absence of Covid-19 measures.

Surrounding the direct figures on secondary care are the potential knock-on effects of reductions of activity in other areas. Health practitioners have voiced concerns about the potential backlog of health issues within society that have yet to be identified.

At the same time, a number of screening services had been paused and in-patient bed occupancy for those with the most severe mental illness fell by 15 per cent between mid-February and the end of March.

The Department noted a 40 per cent downturn in red flag outpatient activity. Essentially meaning a huge fall off in the number of people with suspected cancer being seen through April and into May. With that demand now starting to increase again, there will be an inevitable increase in the demand for surgery.

The Health Minister has outlined plans for the five health trusts to publish plans for tackling waiting lists, provide high-priority cancer services and deal with other urgent conditions. However, amidst increasing pressures, issues such as a challenging budget scenario and staffing shortages remain.

Added to this is the fact that Covid-19 remains a concern. As well as ensuring that preparations are in place for a potential second wave of the virus, health services must operate differently than before to negate the potential of increased spread and protect both patients and staff.