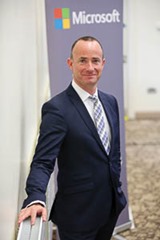 Neil Jordan, Microsoft’s General Manager for Worldwide Health, shares his perspective on health ICT and its potential in Northern Ireland, the key trends weaving through the sector, and the benefits of embracing the cloud.

Across the global picture of e-health, it’s fascinating to see how all the system requirements and problems being solved are common and yet nuanced. The issues of growing demand and financial management are similar, for example, on both sides of the Atlantic.

Technology is not the only answer to some of these problems. Indeed, a range of answers is needed – not least around policy and social change – but technology can be a fundamental underpinning for a lot of the changes that need to happen, whether that’s the move towards a more patient-centric system or finding better ways of understanding how much can go towards prevention and the long-term management of conditions.

According to Gartner, the four key areas in health IT at present are:

• analytics and business intelligence; and

Three years ago, everyone was talking about electronic medical records and their effect on quality and efficiency. Since then, more people have become digitised and there is now a realisation that the electronic record in itself is not the end point for transformation in health – it’s a foundational piece that needs to be there.

In a hospital which I visited in Seattle recently, the roll-out of electronic medical records was slow and costing more than the construction cost of the hospital. However, implementations in Europe and Brazil (the latter covering 276 hospitals in three months) show that there is clearly a move towards commoditising healthcare information and delivering the systems.

The big trend in mobile health is the tablet. The original influx of iPads and other tablets was great for getting the clinician more connected to IT but has not served the wider population of health workers. Typically, these are secondary or tertiary devices so that people are going back to desktops to update them. A new series of devices are now enabling a mobile care environment.

In terms of productivity and collaboration, around 40 per cent of the information that affects the quality and efficiency of delivering health is not captured in the electronic record. This is typically information that relates to the real-term delivery of healthcare and health team transformation i.e. away from a strict hierarchy with the doctor at the top to a more collaborative and cross-institutional model.

Northern Ireland is, in many ways, ahead of the curve given the integration of social care and mental health into its core foundational infrastructure. Elsewhere, Microsoft has been helping Operation Smile – an NGO which provides cleft palate surgery in the world’s poorest communities – with simple collaborative tools to drive much greater efficiency.

The difficulty is that efficiencies are often absorbed into the system and this is why analytics is the single most important piece in health IT today. Digitisation involves moving from data collection to a knowledge-driven healthcare system.

Finally, if there was ever an industry that needs cloud-based technologies, it’s the health industry. The dispersed distribution of health IT staff means that systems that require very little in-house maintenance represent an extremely strong driver. Health, by its nature, is cross-institutional and the cloud can help to cross some of the core infrastructural barriers.

Health has traditionally been reluctant to adopt cloud but transformation is happening. A third of US hospital users of Microsoft Office have moved to Microsoft’s cloud technologies – and achieved average savings of $4 million per hospital.

Nobody is looking harder to make sure that the data in our data centres are secure at the point of encryption. Data are encrypted by the user in the first place. Microsoft has never provided business or government data in response to a national security order and will contest any attempt by the US Government to disclose customer content stored exclusively overseas. Our model also prohibits the re-use or re-sale of those data for other purposes. 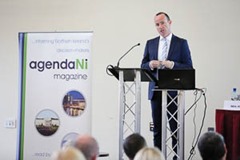 For a number of years, people have been saying that we fundamentally have to transform the system and get more care and money out of the hospitals and into prevention and primary care. Technology is central to helping that happen – but it has to be a partnership in terms of how we do that and how we do that well. It is happening. People should feel confident that it can happen and it doesn’t have to cost the Earth to do it.

Northern Ireland has the clear advantage of pre-integrated services but my underlying concern is that the technological infrastructure to support it is not as fully standardised and as up-to-date as it needs to be. We’ve found time and time again that unless you’ve “ploughed the field first,” it’s very hard to get these germinations of new ideas to actually “seed” and to work.

In summary, the most important thing to keep abreast of, and start feeling confident about, is the use of cloud technology. This enables us not just to deploy things faster and more cheaply but also allows us to do things that we haven’t done before, including new connections within the system and ultimately connections with the patient in a context where data are secure, private and is not re-used.

Neil Jordan is the General Manager of the Worldwide Health Group at Microsoft Corp. He was born and educated in the UK, obtaining a bachelor of arts honours degree and then a masters in biological anthropology from the University of Cambridge.

He joined Microsoft 10 years ago, and for three years he was the head of Healthcare for Microsoft UK, leading the local team working with the NHS in England during the unprecedented National Programme for IT, before joining Microsoft in the USA to take up his current role.