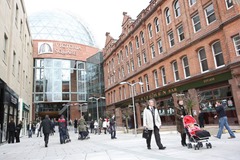 Alexandra Jones, CEO of the Centre for Cities think tank, summed up the factors for a successful city and assessed Belfast’s performance as the recovery approaches.

There is no doubt that the recession has had a major impact on all UK cities. At this point in the 1930s recession, the UK had “gone back to growth … and this time we haven’t,” Alexandra Jones notes.

Jones is CEO of the Centre for Cities, the UK’s only specialist think tank dedicated to improving city economies. There are signs of economic growth but many businesses have been telling her organisation that 2013 “is the year to survive.”

Growth, though, will return and cities need to consider where new jobs will come from. The Centre for Cities identifies three lessons from the boom years (1998-2008).

Firstly, manufacturing employment was decreasing even as the economy was growing. This trend holds true in China and Germany as well as the UK. Manufacturing, of course, is “critical” for economies as a very important source of output but “manufacturing can’t be the only thing you’re thinking about when it comes to jobs.”

Secondly, knowledge-intensive public sector jobs (e.g. in education and healthcare) were a major source of employment growth. All observers recognise that this will not happen in the same way over the next 10 years and managing that change will be a “key challenge” for Belfast, given its heavy reliance on the public sector.

Thirdly, professional knowledge services (e.g. in banking, finance and insurance) were also a major growth factor. Belfast is “really good” in this area and this reflects its high skills. This is one of the city’s “key strengths” as the long-term shift to knowledge-intensive jobs has been reinforced by the recession: “Most of the jobs lost were unskilled and administrative.”

Three out of four highly skilled jobs are in cities and gross value added (GVA) in cities is 10 per cent higher than elsewhere. CO2 emissions per head are 16 per cent lower in cities. Cities, by their nature, are obviously very different from each other and Jones believes that national policy “doesn’t reflect this enough.”

Many cities in the boom years tended to have the same strategy, with each one saying it was the best place in the world to live, work or study. “Actually, you need more than that to really be successful,” Jones commented. “And I think you are doing more than that but it’s keeping that in mind.”

A successful city economy will have a diversity of businesses, innovation and a share of inward investment. It will be a “thriving” place with good start-ups. Its population will have the right skills and ideally be growing, open and diverse.

Strong leadership is very important. This combines a vision and a sense of how to deliver on it, and strong leaders in both the public and private sectors need to work together.

Finance also matters as little can be achieved without it. Right now, this means the public sector taking risks as the private sector may not be able to afford the upfront investment but still wants to move projects forward.

In England, the Government has signed ‘city deals’ with the eight largest cities outside London and it is now rolling this out to 20 smaller cities. Each city is asked to identify its largest problem, what the Government can do to change that, and what the city will do in addition to that. These “something for something” deals release more power and money to city authorities.

A city region stretches well beyond the city itself and covers the commuter settlements in which many of its workers will live. This is the “real geography” of cities. Good working relationships need to be built up across those local authority boundaries.

Belfast performs well in business stock (269 businesses per 10,000 people) but much less well in start-ups (ranked 63rd out of the 64 UK cities). The city has several large firms: an economic risk as changes in their performance have a major impact on the labour market.

Around 4.5 per cent of Belfast businesses are foreign-owned, a higher proportion than in Cardiff, Edinburgh or Manchester: “You’ve been really good at getting inward investment. You’ve been less good at supporting some of the enterprise that will make you even more successful.”

Innovation levels are low and Belfast is 64th out of all 64 cities. Cardiff is 31st and Edinburgh third. Investigating how other cities have done better will help Belfast to improve in this area.

“Skills are absolutely critical to city success,” Jones emphasised. “Every city that has high levels of people with high levels of skills does better.” High skills in Belfast are one of the main reasons for attracting inward investment, alongside a large graduate population and relatively low costs.

Conversely, the persistence of low skills helps to explain the increase in the claimant count. Retail workers are vulnerable as they are less likely to find new jobs. Apprenticeships are “really important” for countering youth unemployment.

The Centre for Cities has found that highly skilled jobs are increasingly being concentrated in city centres while low skilled jobs are being scattered outside them. Transport links must therefore bring workers and high skilled investors into the city centre but also connect the outskirts, where lower skilled people live and work.

“You’re moving in all the right directions,” Jones said in conclusion. “I think you’ve got a very bright future as a city so it’s just about ‘where next?’ and being very realistic [and] aspirational about how you can achieve what I think you can achieve.” 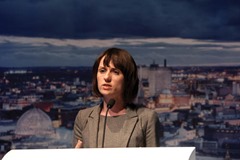 Alexandra Jones’ key message to Belfast is that the city is doing well in a number of areas that will be really important in economic recovery i.e. high skills, changing the perception of the city and the public sector taking on a leadership role.

“You still face the challenges around high levels of people with no qualifications, around the impact that the recession’s had on many of those people (actually there are fewer jobs there) and working at that wider city region level,” she told agendaNi. Belfast must “keep making the progress that you have been making” and make sure that the city centre and the wider urban area are “fully connected.”

Alexandra Jones has now visited Belfast several times and feels that the sense of change is clearly visible: “You can feel that self-confidence grow.” New developments stand out in each new visit. “For me, the kind of passion and the aspiration are really important,” she commented. “And I think the next bit is having a really clear vision and really clear steps about how to get there. That will be a thing that just keeps Belfast on the right track.”