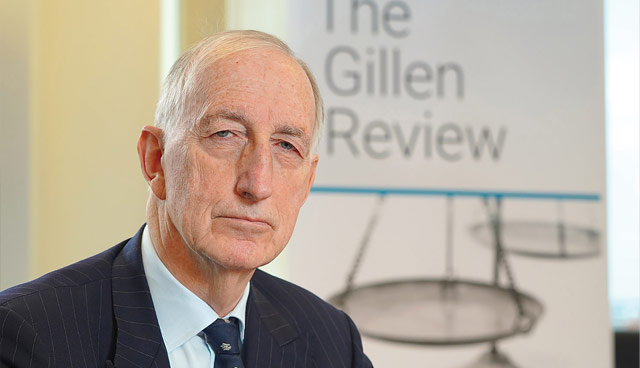 Following the conclusion of a consultation process on his preliminary report into law and procedure in serious sexual offences in Northern Ireland, David Whelan speaks to The Right Honourable Sir John Gillen about his wide-ranging recommendations and their implementation.

Recently retired from his role as Lord Justice of Appeal in Northern Ireland, the former High Court Judge is leading the independent review commissioned by the Criminal Justice Board (CJB) on the arrangements to deliver justice in serious sexual offenses cases.

Gillen’s recent work included serving as the senior family judge for Northern Ireland and chairman of the Children Order Advisory Committee, after which he published a major review of the Civil and Family Justice system in Northern Ireland in 2017.

In 2018, he published over 200 recommendations within a preliminary report, research for which considered the complainant’s journey from the initial complaint through to the point of court disposal. The review was prompted by a greater level of public awareness in the recent high-profile alleged rape trial of high-profile sports players in Northern Ireland. However, as Gillen explains, many of the issues brought to the public’s attention during coverage of the trial have been long recognised within the legal profession and the need for a review of how the criminal justice system deals with these cases pre-dates the recent trial.

Pointing to recognisable “defects” within the system in relation to existing law and procedures around serious sexual offences, he stresses his belief that the criminal justice systems operating in the UK and Ireland are the “finest in the world” but adds: “In dealing with serious sexual offences I think it is in need of repair in order to make that system more fair and just.”

In coming to his recommendations Gillen and his team conducted extensive research into the actions of 16 countries and various jurisdictions across Europe, the US, South Africa, Australia and New Zealand. They explored outcomes of both adversarial and inquisitorial systems and the impact they had on the complainant.

A context for the need to review the current system in Northern Ireland can be found in recent statistics which highlight a gross under-reporting of crimes. These statistics include an over 40 per cent drop out rate of those who do enter the legal process. At the same time, the overall conviction rate involving sexual offences in the Crown Court has fallen to 63.8 per cent in 2017/18 from 73.8 per cent in 2016/17. These figures are in contrast to non-sexual offences, where the conviction rate in the Crown Court is 88.2 per cent.

“It’s right to say I gathered a great deal of information and recommendations were well informed by a diverse number of countries. This was important because it’s worth noting that Northern Ireland is not exceptional in these problems. Many of the issues around dealing with serious sexual offences are international problems and its my belief that they must be solved internationally through shared learning.”

While Gillen’s recommendations are extensive, he highlights 16 key recommendations around which others revolve. Amongst these include issues such as raising public awareness, restricting public access to trials, facilitating pre-recorded cross-examination of vulnerable complainants, tackling social media use, publicly funded legal representation for complainants and the potential introduction of restorative practice.

Gillen is keen to stress that the review was carried out with the aim of a holistic approach to reform, rather than any cherrypicking of issues. Describing his overall approach as similar to a “jigsaw”, he states: “If we are to change the system and to repair the defects then we have to complete the whole jigsaw. Tackling three or four issues is not going to be enough because as I make clear in the report, these recommendations complement each other.

Mapping out an example, Gillen points to the issue of disclosure and how disclosure failings have contributed to miscarriages of justice in some high-profile cases. Gillen states that in attempting to address this, it must be done in conjunction with another area of recommendation which centres around complainants being potentially entitled to some form of legal representation. He points to this potentially easing the pressures of huge delays in the system but adds that a further factor of cost to the public purse must be considered.

“They all complement each other, and the danger is that some of these aspects are cherrypicked over others. A sticking plaster approach isn’t going to work. It needs overall radical reform.

“With a dropout rate pushing close to 50 per cent it is clear that there are problems in the system that are contributing to those figures. I would hope that with these issues addressed, there would be a reflection in a decrease of both under reporting and the dropout rate.”

One of the most attention-grabbing recommendations by Gillen is for access of the public to trials involving serious sexual offences to be confined to close family members of the complainant and the defendant, with access for the press being maintained. Gillen recognises the “valid” argument that such a measure could undermine the principle of open justice. In fact, he himself advocated for a more open system when serving as the senior family judge for Northern Ireland and highlights his belief that open justice is a fundamental principle of the rule of law.

“However, open justice is important so long as it contributes to true justice,” he states. “Where it acts as an impediment to true justice then we have to address it.” Pointing to existing precedents already in operation in Northern Ireland such as around a child’s case in the criminal justice system, within the family justice system and for cases involving national security, as well as being successfully implemented in Ireland and Scotland, he outlines three main reasons he believes the recommendation should be implemented.

The first is that trials of this nature being open to the public is a “clear impediment” to complainants coming forward. The second is a greater risk existing to the law that the anonymity of complainants must be protected. Originally introduced to aide complainants in coming forward, Gillen believes that open trials and the prevalence of social media is “rendering that law nugatory”. The third issue also involves social media, with Gillen stating that its prevalence, alongside public access has the potential to undermine the fundamentals of the court process.

A further recommendation centres on a provision being put in place to allow for early pre-recorded cross examination, initially of vulnerable people, to be conducted away from the court setting. Gillen recommends that the provision should eventually be extended to include all complainants in serious sexual offences.

Put to him that such an approach may favour either the complainant or the accused because of jury perception, Gillen is adamant that the extensive research carried out by his team and existing literature highlights no impact on a jury’s prejudices. He explains that legislation for pre-recording cross-examination already exists in Northern Ireland but has yet to be introduced. Outlining the successful outworkings of similar legislation in England over the past four years, where such a process is available for children and adults deemed vulnerable, he suggests that the benefits are two-fold. Firstly, dramatically decreasing delays in the system and secondly, avoiding unnecessary court appearances for complainants.

Turning to the potential cost of such measures, Gillen understands the need for a time-limit on legal representation for a complainant given the potential cost to the public. However, when questioned on whether the potential overall cost of implementing his recommendations are feasible he states that the question being asked should be “can we afford not to do this”?

The same report calculated that the costs for sexual violence occurring outside the partner setting for Northern Ireland were estimated at £257 million for 2011/12. This cost estimate excludes costs for child victims of rape and sexual assault, which it has not been possible to calculate. In this respect the cost estimate is considered to be an underestimate.

“I recognise that we are in a challenging financial period when many disparate and wide-ranging demands are being made on government. Limited funds are available in every conceivable area of public concern. Difficult choices have to be made. However, policymakers have to decide how two fundamental obligations of the state are to be met. First, to those who have suffered unspeakable sexual crimes that strike at their human dignity and bodily integrity, with life-changing consequences in many cases. Secondly, to those who are accused of these offences so as to ensure a fair trial and the innocent are not convicted. How are these obligations to be met if appropriate resources are not provided? Are we to abandon these people to their fate merely because we do not have the appetite to pay for all our good intentions?”

However, whilst cost will be a factor, Gillen highlights his belief that the majority of his suggested reforms can be done without cost via changes within the criminal justice system. This, he stresses, should be done unilaterally with other nations on a cross-jurisdictional approach. For example, taking

onboard learnings from a government inquiry into the issue of social media use being carried out in England and Wales, set to be completed early this year.

Probably the largest cost-factor in recent years has been that of delay and Gillen suggests front-loading the legal system with an early-time-limited and case managed system that has at its core early joint engagement by both prosecution and defence representatives.

“We have a system at the minute falling short of what should be expected from a criminal justice system dealing with serious sexual offences. We as a society have to recognise that and we have to change it. To do so, we have to pay for it,” he adds.

The final issue that Gillen addresses is around the utilisation of restorative justice. This he admits is one of the more controversial issues within the review and declares that how to approach it has split opinion. Already deemed successful in its utilisation in Northern Ireland in terms of youth justice and low-tariff crime, Gillen believes that there is a potential for such a scheme to encourage more victims to enter the criminal justice system, especially those who want to see an accused held accountable but do not wish to engage in the court process. He adds that given the level of people that the system is currently failing, the state has an obligation to consider an alternative.

He stresses that any approach to restorative practice, whether that is organised within or outside the system (another area of controversial debate) must be victim-led and “under no circumstances can it ever be imposed on a complainant”. Adding a requirement for greater awareness around the potential for manipulation in those cases that do go forward. He also stresses that such an approach would only be available in a small number of specific cases and not in areas such as child abuse or involving serial offenders.

He concludes: “Some might see this as a soft option. That there are people who won’t go to jail, while others might for similar offences. My response to this is that this is already occurring given the level of under-reporting, drop-outs and system defects.”

Consultation on the Gillen Review concluded in January and the final report is expected to be presented to the Criminal Justice Board in March.

Systemic change needed to improve the system for victims