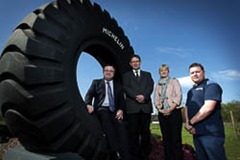 Employment and Learning Minister Stephen Farry talks to Owen McQuade about how devolution has improved Northern Ireland’s skills and education landscape in comparison with Great Britain.

At a time when devolution cannot be taken for granted, Stephen Farry is keen to contrast the gains made by devolving power with how policy could have developed under direct rule. This message runs against the increasingly cynical public mood but, as he points out, many opportunities would have been missed.

Farry remarks: “I think it is incumbent on those who are in ministerial office – and indeed other stakeholders in society – to articulate to people the importance of devolution because the wider political narrative is undermining the public’s confidence in the current arrangements.”

The best known decision within his remit is the freezing of tuition fees in real terms for local students at local universities.

“We don’t regard that simply as something based around populism,” the Minister states. “There’s a strong policy rationale for that in that we have a larger skills gap historically compared to other regions of the UK. We need to transform to a high skilled economy very rapidly – so there’s a real pressure on ensuring that we’re maximising the participation of young people within the higher education system.” Freezing tuition fees fits with that aspiration and also helps to ensure a good socio-economic mix in the student population.

Action groups to tackle particular skills pressures have also been established. The Skills Strategy sets broad targets for attainment at and above Level 2 and a broad policy agenda supports the uptake of STEM subjects. However, there is also a need to focus on sectors which are “critical to the future of the Northern Ireland economy.”

Three action groups, each chaired by the Minister, are currently in operation:

• engineering and advanced manufacturing; and

These bring together government departments, colleges, universities, employers’ organisations and employers to “map out the skill requirements” for those sectors and update the skills action plans every six months. 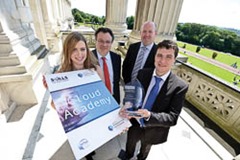 “That would not have happened under direct rule,” he affirms, adding that stakeholders now have “much more ready access” to him as Minister, his special adviser and senior officials in the Department for Employment and Learning (DEL).

Northern Ireland now has a distinct strategy on apprenticeships which differs notably from the approach taken in England. At present, two-thirds of apprenticeships are at Level 2 and a third at Level 3. The department plans to extend apprenticeships to Level 4 and above and convert Level 2 into a new set of youth traineeships.

Farry adds: “We’re very consciously trying to associate the brand of apprenticeships much more with the higher level skills, consistent with the evolution of the skill requirements of the economy.” A much more sectoral approach is also being taken i.e. ensuring that young people going through apprenticeships undertake a breadth of training and have transferable skills within their sector.

Northern Ireland is the only part of the UK where employment law is devolved, thus allowing the Executive to make decisions that reflect local needs – and the views of the business community and the trade unions. A review of employment law is under way and Farry has presented a paper to the Executive with a number of proposed changes to the law. His approach differs from some of the reforms taken forward in Great Britain – as shown by the stronger emphasis on alternative dispute resolution rather than tribunals.

The CBI has lobbied DEL on extending the qualifying period for unfair dismissal claims. Farry’s response is that the case for change has been not yet been made and that kind of change would not receive “broad-based political support” in Northern Ireland. The Minister hopes that changes to the rules for employment tribunals will result in better outcomes for all involved.

Northern Ireland’s employment programme is not part of the welfare reform agenda but works in parallel with some aspects of those reforms. Compared to the work programmes in Great Britain, the Northern Ireland model has several more checks and balances which help a unemployed person find a job.

Farry comments: “In Great Britain, they have what they term a ‘black box’ which means that once someone is referred through their Jobcentre Plus into the work programme, there’s no real accountability.”

This raises the risk that the contractor will focus their attention on the “easier cases”. The employment programme in Northern Ireland tries to ensure an “individually tailored” approach and a stronger guarantee to get all people who can work into work.

Devolution is often interpreted by the public as only copying policy from Britain in a delayed manner.

“It’s important to highlight that we do have the opportunity to do things differently,” he emphasises. “I’m keen to see that Northern Ireland actually takes the lead.” The Executive and Assembly, in his view, need to think about policy innovation “more strongly” and he reiterates: “We should be doing things ourselves – on first principles – and trying to be radical, to engage in innovation, and hopefully our models will become regarded as ‘the way to go’ by others.” 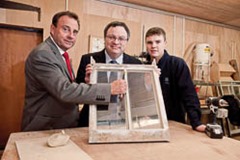 Three years into his post, the Minister is pleased to have covered the full range of the department’s responsibilities.

“I think where you have a clear focus on what you want to do and where you can avoided being side-tracked and getting bogged down in controversy around small issues – or marginal issues to the work of the department – then a lot can happen.”

The experience of being a Minister is “very rewarding because it allows you to genuinely make a difference” and see ideas turned into reality.

Apprenticeships policy is the most central area of reform within his remit and is about “a whole new approach to providing skills for the modern economy.” Across Europe, lower unemployment is clearly correlated with strong, work-based vocational training. A “massive upscale” from the small footprint of apprenticeships in Northern Ireland is possible with the scope also being widened out to a broader range of occupational areas.

The Minister predicts: “I think young people will benefit in terms of better chances of sustained employment. I think employers will be more satisfied in terms of ensuring that they’re both getting the technical skills and the employability skills that they require.”

The traditional model of higher education can produce good critical thinkers but this is sometimes not sufficient for employability in the workplace: “We need a balance between the two pathways [academic and vocational] which I don’t think we currently have.”

Ultimately, this balance will be achieved by a parity of esteem between higher level apprenticeships and the university route with both being seen as “equally legitimate” by young people and their parents and friends.

The review of youth training focuses on young people who are leaving school at 16 who are not yet ready for the world of work: “At this stage, we’re not as effective as we could be as a society and also as a government in terms of responding to their needs.”

A public consultation on a new youth training system – based on two routes – is due to begin in November.

Farry is very conscious of the current budget cutbacks which will become “ever tighter” and create “huge challenges” for investing in skills.

However, he is also clear that some reforms can proceed through smarter working rather than by allocating large budgets.

Encouraging more young people to take up work-based training will be more cost-effective for them and the state.

Northern Ireland has historically had a smaller footprint of PhDs than most other UK regions but the Executive is now investing in doubling the number within a decade. It is already at the half-way point among the 12 UK regions and could be in second or third position by the end of the decade.

A review of careers guidance, advice and information will also help to improve the efficiency of the labour market. The expert panel is due to report back to ministers by the start of November.

The current further education strategy (published in 2004) is “ripe for reform” and its successor is now being prepared. The FE sector will soon become the provider of choice in many areas of training and the colleges have an “exciting future” ahead of them.

The Assured Skills programme offers bespoke training programmes to investors. Farry also points to the software testing, cloud computing and data analytics academies which respond to their particular requirements of investors: “And again that’s something that’s been developed under devolution which gives us a competitive edge over other UK regions.”