Set up in 2015 to deliver the UK’s first ever national infrastructure assessment, the National Infrastructure Commission was born out of a realisation that the UK was lagging behind in infrastructure compared to its economic neighbours, stemming from a shortfall in investment.

A series of reports have all indicated that long-term infrastructure planning in the UK was being hindered by the short-termism of the political cycle, making it difficult to establish plans that looked beyond a government term.

The solution was the establishment of an independent body to assess the nation’s needs for infrastructure with the view to providing the government with long-term advice on strategic infrastructure challenges.

Outlining how the Commission has been able to conduct its work outside of the political decision-making sphere, Richardson says: “We don’t, in the end, make the decisions, that’s for democratically elected politicians. However, we take some of the politics out of the choices and offer the long-term analysis that government has in the past found challenging to utilise. We provide the public advice that is needed.”

“We don’t cover things like schools, hospitals and prisons; and we don’t cover housing. Those issues are more politically contentious than economic infrastructure and it would be more difficult for government to hand those areas over to an independent body,” he explains.

The three key elements to the Commission’s role are the delivery of a National Infrastructure Assessment, a long-term infrastructure plan, produced once every five years, across all economic infrastructure. Another element is the conducting of specific in-depth reports, commissioned by the Government, such as the recent study into connectivity between main cities in the north of England and bringing 5G connectivity to the UK. Finally, the production of an annual monitoring report, holding government to account for agreed recommendations.

Discussing the importance of the accountability role, Richardson says: “Every year we come back and see if there has been enough progress. That differentiates us from what has gone before, where an independent commission, set up to look at a particular issue, disappears after the publishing of its final recommendations and whether action is taken is left entirely in the hands of the Government.”

The first National Infrastructure Assessment was launched on 10 July 2018 and looks out to 2050. Richardson explains that delivery of the assessment was aided by the fact that infrastructure is one of the few issues across government where there is a clear cross-party consensus on its importance for confidence and growth.

“To make that happen requires a long-term vision, with lasting plans and stable funding. That’s the thing that the UK has found very difficult to achieve. The NIA sets out what we think is the plan of action for government to adopt and hopefully then they will be able to put in place those lasting plans with a bit more neutrality behind them,” adds Richardson.

The recommendations emanating from last year’s assessment include the likes of:

Richardson says: “A lot of the report looked at challenges around decarbonising infrastructure, which is responsible for a substantial amount of carbon emissions in the UK. So, we looked at the power system and proposed that half of the UK’s power should be provided by renewables by 2030, having compared that with nuclear alternatives.

“However, it’s not just all about new. We have recommendations around existing assets such as road maintenance, reduced leakage in our water system and policy changes around enabling support measures for low carbon energy to work better.

“We have also drawn up proposals around finance and funding, including what happens if we lose access to the European Investment Bank (EIB), a very useful source of finance.”

Richardson adds that the report is also measured, in that it recognises areas where options need to be kept open and decisions are better delayed, such as around the decarbonisation of heat, allowing for, as recommended, improvements in data quality and allowing for design innovation, which will lead to better decision making on infrastructure.

Discussing the creation of the National Infrastructure Assessment, Richardson highlights two years of information gathering, analysis and engagement, giving the assessment the credibility to be accepted as a fully costed plan. Richardson is keen to stress that the assessment is not simply a “wish list” and that in its creation the Assessment must operate within budget constraints. 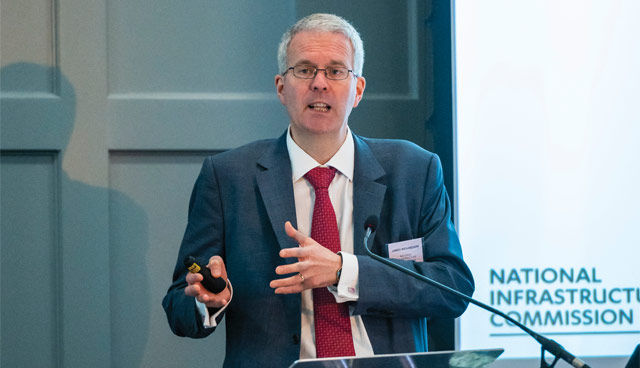 “We are set a constraint by the Government and we are required to make our recommendations within a budget constraint for public capital expenditure, because there always will be one. If we are going to set out a realistic plan, it has to be fully costed and so we operate within this constraint of between 1 and 1.2 per cent of GDP for public capital investment in economic infrastructure.”

Acknowledging that much of the UK’s infrastructure is owned and operated by the private sector, especially in the areas of energy and digital, the Commission is also under the influence of a “softer” constraint, whereby it must set out the implications of its recommendations on consumer and business bills.

“We took this as an implication that we shouldn’t be pushing these bills up heavily and so, although there is a great deal of investment needed, we have managed that within relatively limited impact on people’s bills. We consider this is an important part of our remit because it means that what we put forward is something that can realistically be delivered by the Government.”

Having handed the assessment to the Government in summer 2018, Richardson presents a positive response, including a commitment from the Government to publish a response to the recommendations and deliver a national infrastructure strategy in 2019.

Richardson concludes by outlining the four tests which the Commission has devised to assess any future strategy including: