On 13 August, the Department of Education issued its ‘Northern Ireland Re-Opening Schools Guidance – New School Day’ document, a 70-page guide for the reopening of schools after the Covid-19 pandemic forced their closures.

In his ministerial foreword to the document, Education Minister Peter Weir writes that his “strategic objective has always been to achieve maximum face-to-face in class teaching time for all pupils, where safe to do so, at the earliest opportunity”. The strategy for the day one return to education was said to have been developed in line with the Executive’s Coronavirus Executive Approach to Decision Making document, published in May, and with the aid of advice provided by the Chief medical Officer and the Chief Scientific Advisor, along with the Executive’s early August agreement that stringent social distancing arrangements between students could be relaxed from 17 August onwards.

Under the guidance, pupils in Primary 7, Year 12 and Year 14, along with all vulnerable students, started their school terms on 24 August. All other students returned during the week commencing 31 August. The guidance is broken down into 10 areas across the spectrum of the educational experience and Covid-19 precautions: social distancing; hygiene and physical protection; school transport; school meals catering services; curriculum delivery; workforce; pupil attendance; what to do if a person onsite develops Covid-19 symptoms; communications; and supplementary guidance for residential boarding/hostel accommodation in educational facilities.

In terms of the possibility of someone onsite displaying symptoms of Covid-19, the guidance states: “If anyone becomes unwell with a new, continuous cough or a high temperature/fever or anosmia in an educational setting, they and any members of their household within that school setting must be sent home and advised to follow the PHA guidance for households with possible coronavirus infection.” It also advises that if it is a child that is suspected of infection, they should, if possible, be isolated in a room “behind a closed door” while waiting to be collected. If not possible, it is advised that they be kept at two-metre distances from others and allowed to use bathrooms in the case of needing one, with the bathrooms to be disinfected before being returned to wide use.

The relaxation of social distancing guidelines in the schools does not apply to the adults within, with a two-metre distance maintained between adults and a distance “as far as is practicable between adults and pupils”. “Decreased interaction”, i.e. the forming of small groups, or “protected bubbles”, within years and classes is also recommended for children up to and including Year 10. For those in Years 11–14, “social distancing should be adhered to as far as is possible whilst maintaining effective curriculum delivery” and “there should be limited interactions between different Year groups”.

Schools are also advised to maximise the space at their disposal, to give careful consideration to the “removal of unnecessary items in the classroom to maximise the capacity and decrease the number of items requiring cleaning” and that “to provide capacity to accommodate social distancing approaches for adults and older pupils, a flexible approach to the use of all existing spaces within the usual setting may be taken”.

One of the more contentious issues of the guidance publication proved to be the provision, or lack thereof, of personal protective equipment (PPE). After the announcement that north Belfast grammar school Belfast Royal Academy would make face masks mandatory for students and staff that pre-empted the publication of the guidance, Weir’s guidance said that PPE would “only be required in a very small number of cases, e.g. dealing with intimate needs/giving medication”.

This diverged from advice given in the Republic of Ireland, where students and teachers alike were advised to wear face coverings in schools, especially where the advised two metres of distance proved impossible to maintain. 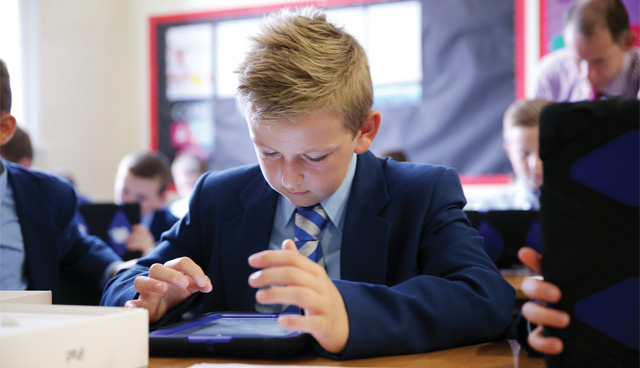 A survey conducted by the NASUWT found that the majority of their members, 58 per cent, did not feel prepared to return to school or college. 89 per cent reported feeling stressed or anxious due to the return and 77 per cent stated that they were unsure whether or not it was safe for children to return to school.

Weir’s guidance states that it is mandatory for students aged 13 and over to wear face coverings on public transport and recommends that all students do the same. However, it says that “given the risk mitigations in place in schools to limit and contain the spread of Covid-19, face coverings are not generally recommended for routine use in schools”.

In response to the publication of the guidance, the largest teaching union in Northern Ireland branded them as “entirely unrealistic and unfair”. With other guidance such as the staggered arrival and pick up times at school gates and one way systems within school buildings, the NASUWT raised concerns that the measures would increase workloads for teachers and that schools had not been given enough time or resources to prepare.

The lack of resources, particularly as schools did not have existing stocks of PPE, were a particular source for criticism, with NASUWT General Secretary Patrick Roach stressing the need for government to “commit the resources that will be needed to enable schools to implement the guidance and reopen safely”. The union’s national official for Northern Ireland, Justin McCamphill added that it was “abundantly clear” that “returning without the guarantee of social distancing will increase workload burdens for school principals and teachers” and that “without social distancing schools will have to implement more mitigating measures, not fewer”.

A survey conducted by the union found that the majority of their members, 58 per cent, did not feel prepared to return to school or college. 89 per cent reported feeling stressed or anxious due to the return and 77 per cent stated that they were unsure whether or not it was safe for children to return to school. 61 per cent of members reported that they had not been consulted over risk assessments undertaken in their school or college.

As schools reopened, PPE and masks proved to be the major topic of contention, with unions stating that they should be mandatory and the Chief Medical Officer advising that they be worn in schools while pictures of Weir visiting schools without a mask were circulated as part of the media’s coverage of the reopening.

As pressure also mounted over the lack of resources allocated, Weir announced a £42 million funding package for the restart on the day that P7s, Year 12s and 14s returned to education. The package, designed to cover the first term of the academic year, includes: £17.5 million for substitute teachers and other school expenditure; £6.4 million for PPE; £5 million for school wellbeing initiatives; £3.1 million for home to school transport; and £1.4 million for special education needs. A day later, Weir also announced the amendment of the guidance for face masks, which now include the recommendation that they be worn by students and teachers in school corridors.

Things have gotten off to an inauspicious start, as closures have already been forced in Ballyclare Secondary School and St. Kevin’s Primary School and St. Louise’s Comprehensive College, both in west Belfast. For Peter Weir and the Department of Education, the message from teachers and schools seems to be clear: more guidance and more resources are needed urgently.