Latest figures put the healthcare costs of alcohol misuse by older people in Northern Ireland at a conservative estimate of at least £125 million per year, however, the high level of spending and 30 per cent rise in alcohol related deaths is not fully reflective of the huge challenges that alcohol misuse places on the healthcare system.

Reports from the Northern Ireland Statistical Research Agency highlight a worrying rise in alcohol related morality in Northern Ireland over the last 10 years. Between 2007 and 2017 the number of alcohol related deaths rose from 238 to 303, an increase of almost 30 per cent during this period. This continues a rising trend in alcohol related mortality (deaths in 2001 were 178) but one that represents the tip of the iceberg in terms of the impact of alcohol misuse on individuals, families, the healthcare system and society at large.

As commented by the Coroner (Joe McCrisken) on the recent release of the mortality statistics: “The thin end of the wedge is the 303 reported deaths in 2017 as we know that vastly underplays the role alcohol consumption plays in deaths here and also in terms of the sheer weight of resources that have been deployed to address these issues, at A&E, in GP’s surgeries, and in homes.”

It was against this background and mindful of the comments of the Coroner that the Drink Wise, Age Well partnership led by the substance misuse charities Addiction NI and Addaction commissioned Dr Crealey and Professor O’Neill through Queen’s University Belfast to estimate the cost to the Northern Ireland healthcare system of alcohol misuse. In what follows key findings and their implications are presented.

The largest number of alcohol related deaths in Northern Ireland continue to occur among those aged between 45 and 54 years, closely followed by those aged 55 to 64 years (Northern Ireland Statistics and Research Agency, NISRA) as seen in Figure 1. While Northern Ireland is not alone in seeing a rise in alcohol-related morbidity and mortality among the over 50s, with a similar pattern being observed in England, Wales, Scotland, and Ireland, there is evidence to indicate that unlike several of our nearest neighbours, where among adults there is evidence of less alcohol misuse, similar trends are less apparent in Northern Ireland.  (See Figure 1).

For example, in 2017/18 in Northern Ireland, the percentage of adults exceeding the weekly recommended upper limits for alcohol consumption (14 units per week) was as high in 45 to 64 year olds as for 25-44 year olds, exceeded only by those aged 18-24 years. 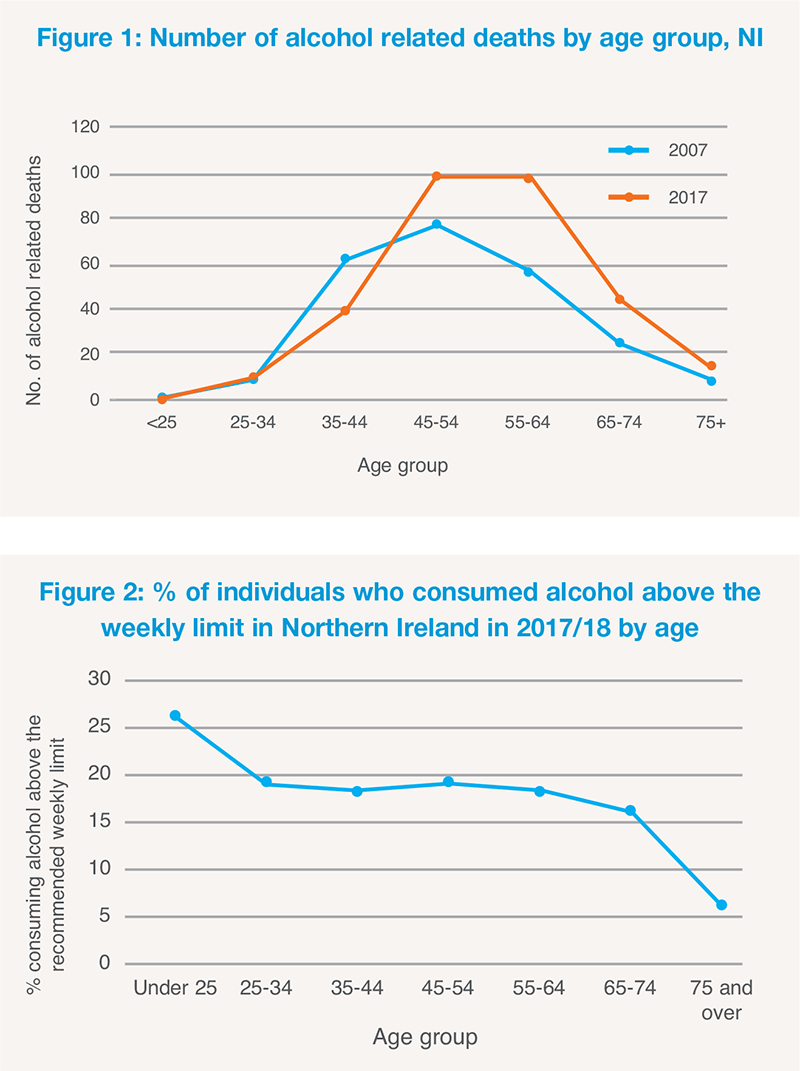 To estimate costs the authors adopted an approach known as attributable fractions. In this, the relationship between alcohol and risk of specific diseases known to be associated with alcohol misuse, are used to establish the proportion of current spending that is attributable to alcohol misuse. This is adjusted for the age profile of the population, specifically those aged 50 and over, and the exercise repeated for various aspects of care, inpatient services, GP care etc.  The authors used the same approach as that which had been adopted to estimate costs in 2008 in Northern Ireland and as had been used to estimate costs in other parts of the UK. The types of conditions where risk increases in the face of sustained alcohol misuse include heart disease, stroke, liver disease and certain cancers.

The authors used Information on expenditures by the health service from the Department of Health and on attributable fractions from the literature.

Results show that in 2017/18 alcohol misuse by those aged 50 and over in Northern Ireland cost the health service and estimated £125 million per annum. To put this figure in perspective in the same year £264.3 million was spent on the General Medical Services component of Family Health Services, GP services, and almost as much was spent on Public Health Services and Paramedic Services combined. It is noteworthy too that healthcare spending on all age groups in 2007 was just £121 million, though this would be higher due to inflation in 2017/18. This clearly indicates the upward trend in healthcare related expenditures arising from alcohol misuse.

The high level of spending reflects something of the iceberg below the surface of the mortality figures reported by the Coroner. The £125 million is a conservative estimate ignoring expenditures on, for example, prescribed medicines related to depression and anxiety (often consumed by those dealing with alcohol addiction or the consequences of misuse); costs that are likely to be substantial. Importantly too the £125 million per annum relates to the use of services based on their current availability. It therefore likely underestimates substantially the actual impact of alcohol misuse in terms of need for services by this age group. Waiting lists for services as well as under-provision of services because of current funding restrictions, mean that the £125 million per annum likely poorly reflects the impact on health of alcohol misuse and the potential impact on healthcare spending were services in place to meet needs.

As healthcare in Northern Ireland is transformed with greater emphasis on care outside of a hospital setting this is something that may change. Comparatively little is spent on support and treatment services for those seeking help managing their alcohol use however as the impact of alcohol misuse grows in Northern Ireland this is something that needs to change in the future.

The cost to the health service is of course only one aspect of the impact of alcohol misuse and as with the other consequences – such as ill-health, stigma, family disruption, and premature death – it is avoidable. This begs the question what can or should we do in response. Raising awareness of alcohol misuse is an obvious starting point and as with the mortality statistics, studies like this can help raise awareness and begin a conversation around drinking habits and how these might be usefully reappraised.

In addition to education, such studies help shine a spotlight on the relatively low levels of funding allocated to services intended to support those seeking to address destructive drinking. Such services have the potential not only to improve health but to reduce the burden of alcohol misuse on the health service.

Beyond these measures, there appears to be a compelling argument to consider the introduction of minimum unit pricing for alcohol. Such a move would be unpopular in many quarters but so too is the use of scarce healthcare resources to address avoidable illness. If such a tax helped to deter over-consumption and ensure that the cost of alcohol to the individual more closely reflected the cost of alcohol to society then as with taxes on plastic bags or on sugar sweetened beverages while initially unpopular it might help change behaviours and impose very little if any net cost in practice.