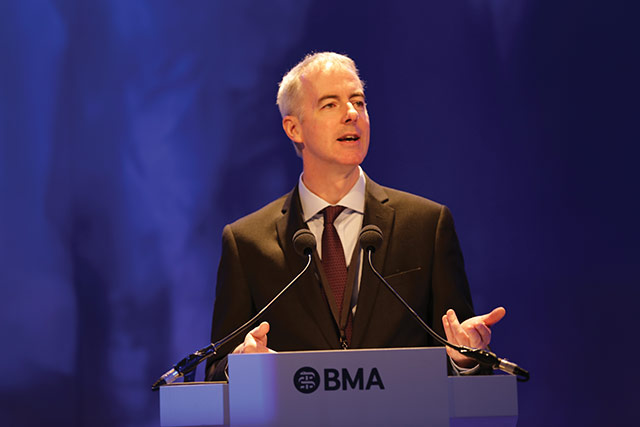 The British Medical Association (BMA) held its Annual Representative Meeting (ARM) in Belfast recently, a conference event attended by over 500 doctors and medical students from across the UK and from all branches of medical practice.

Keynote speaker and Chair of BMA Northern Ireland, Dr John D Woods addressed the meeting stating that there was now a “unique opportunity to reform the health service in Northern Ireland”.

“This is reform that we as practising doctors recognise is needed. Due to health improvements we are all living longer,” said Dr Woods.

“Northern Ireland has the fastest growing population in the UK. Everyday doctors see evidence of increased demand on the health service. GP appointments have increased by 63 per cent per patient in a decade. New, more effective treatments mean greater demand for diagnostic testing. Treatments which are more complex to provide in older, sicker patients. This isn’t demand that we can manage with current funding and processes.

“In March of this year over 200,000 people were waiting for a first outpatient appointment, nearly 50 per cent had been waiting longer than 18 weeks. We have GP practices, particularly in the rural areas of Northern Ireland, on the brink of collapse. There are significant gaps in many of the teams necessary to provide out of hours and acute medical care.

“We also need to improve how health care is delivered. For too many patients, but particularly those with long-term conditions, their experience of healthcare is a series of disjointed episodes of acute care. We must have better integration across the health service. This should be easier for us as a smaller health system.”

Dr Woods told ARM that the now completed Bengoa Review of health and social care services would provide the blueprint for much-needed reform. “The report is an opportunity to reshape the health service. Its recommendations may be challenging but this can’t be an opportunity which is lost,” he added.

“Because opportunities have been lost in the past. We have a series of prior reports gathering dust on a shelf. Reports that weren’t actioned because they lacked funding or the necessary commitment to their purpose from politicians, the public, and health care staff. Reform is possible now because is there is an increasing commitment to change. There is a growing realisation beyond health professionals that it is necessary. Our prior Health Minister, Simon Hamilton, said as much when he announced the expert panel. He said ‘we cannot afford to stand still. We have to transform our health and social care system’.”

“The new Health Minister has signalled her intent to focus efforts on reshaping health and social care to make it is as efficient and effective as possible. This can’t be done without the clinical and professional staff,” he said.

“Her party’s manifesto was clear in recognising the need to involve clinicians in the decisions on redesign of the health care system. We welcome Sinn Féin’s commitment to reform junior doctor contracts by agreement, we need to implement the medical workforce plans currently in development.

“This can’t be done without additional resource which is why we need to invest in primary care at a minimum 10 per cent of the health budget. If we make the changes needed we can have a better health care system; one where the services patients need determines the infrastructure. One which can treat patients more effectively because of better integration between its parts. One which has enough doctors in the correct specialities to meet demand.

“This is the time to make real changes to health care in Northern Ireland. Doctors want the high quality health service that patients deserve. Let’s not miss this chance, but work together to make sure it happens.” 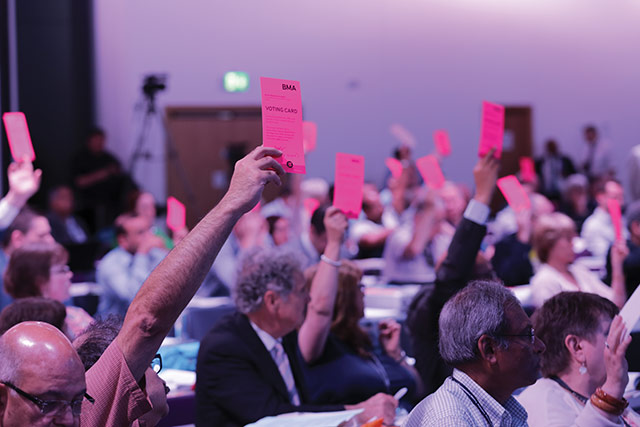 The ARM also hosted a Schools’ Engagement event attended by over 90 post-primary school students from across Northern Ireland. The event was held as part of BMA’s Widening Participation in Medicine programme, which is aimed at encouraging people from the widest possible social and economic backgrounds to consider a career in the medical profession.

The students had the opportunity to take part in interactive mentoring sessions where they quizzed qualified doctors and medical students about why and how they entered the medical profession. They were also offered insights into the different medical specialties and given the opportunity to experience some simple clinical techniques, such as resuscitation or how to use a stethoscope.

Northern Ireland doctors and medical students took the opportunity to debate and propose policy to BMA members from across the UK. The first, which was passed with a majority of votes, urged Northern Ireland to adopt a population health model to meet the changing needs of the public and to help determine the community’s health needs.

Proposing the motion, Dr Tom Black, chair of BMA’s Northern Ireland General Practitioners’ Committee, said: “We need to be thought leaders for the NHS and for society. We need to move to move away from episodic care towards prevention, self-care and primary care within an integrated system.

“We need to use pooled data, pooled skills and value based budgets where the vision, strategy and goals are based on the analysis of local needs and evidence based interventions. We need incentives to encourage joint working and place based leadership. A transformation of process, dynamics and structures throughout the health service. This requires leadership and we need this to come from the medical profession.”

“The role of the Public Health Agency is critical in ensuring the needs of the public are assessed fairly and with a critical eye. It must remain independent and appropriately funded.”

The final Northern Ireland motion passed was on the proposals for a new graduate medical school to be based in Ulster University’s Magee Campus in Derry. Proposing the motion, Chair of the Northern Ireland Medical Students’ Committee, Molly Kerr, told ARM that any new graduate medical school needed to support access for students from disadvantaged backgrounds and come with a rise in medical training posts.

“A new medical school ought to address the need to widen participation to medicine by implementing measures to ensure those from lower socio-economic backgrounds are not in any way disadvantaged as they seek to embark on their medical career,” she said.