Project Stratum, the Government’s plan to deliver Next Generation Access (NGA) broadband to almost 79,000 premises has moved a step closer to fruition after the conclusion of its public consultation process. The Department for the Economy (DfE) has since published their response to the consultation and an addendum to the response.

Project Stratum is a £165 million project, with £150 million of that intended funding arriving through the £1 billion confidence and supply deal struck between the DUP and Theresa May’s Conservative Party in 2017 and the extra £15 million coming from the Department of Agriculture, Environment and Rural Affairs. The return of the Assembly has somewhat muddied the waters in terms of this funding, with the £1 billion being transferred to the Executive as part of the New Decade, New Approach deal funding package.

Initially, £3 million of the £150 million had been included for capital allocation for 2019/20, but this has now been “reprofiled across the financial years to 2023/24” along with the remaining £147 million according to DfE. The Department says that they “fully expect the Executive to provide the funding for this project” and are “working on that basis”.

Ten per cent of Northern Ireland’s premises are currently without access to broadband speeds of 30 megabits per second (Mbps) and Project Stratum plans to connect these premises, dotted across 15,000 postcodes and predominantly in rural areas. The 90 per cent rate of connectivity to 30 Mbps broadband is below the UK Government’s target of 95 per cent, which was largely achieved in Britain in December 2017. Northern Ireland’s connectivity rate when the Project Stratum process was initiated in June 2018 was 88 per cent. 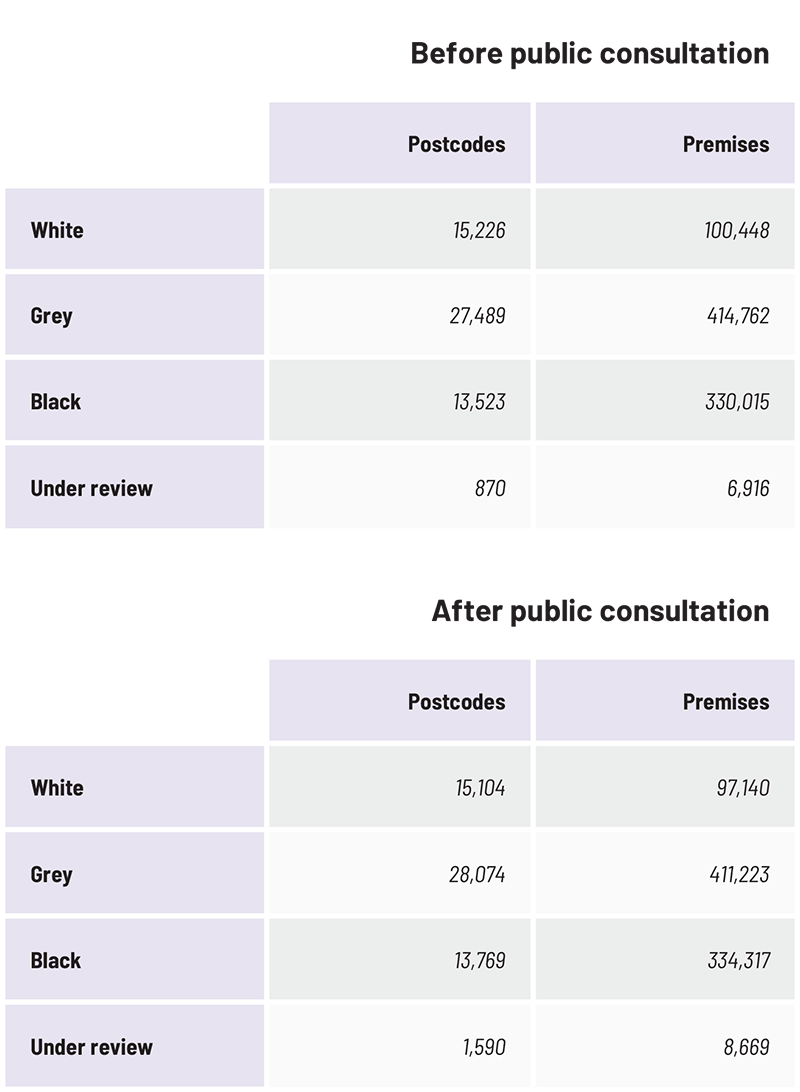 The public consultation process for Project Stratum ended in January 2019, with the Department receiving 1,149 responses from the public. DfE’s response and four annexes were published in December 2019. The result of the consultation was the reclassification of the number of premises per category, with premises broken into three: white (no NGA access); grey (one provider of NGA broadband in the area); and black (two or more NGA providers in the area).

Following the release of the results of the consultation, the DfE, following consultation with Ofcom’s Voluntary Code of Practice for Providing Broadband Speed Information, the numbers of premises connected by providers and under schemes such as the Rural Gigabit Connectivity and the Gigabit Broadband Voucher Scheme and the Land and Property Services records, reduced the number of white premises and postcodes again in an addendum to the public consultation response released in February 2020.

The Department released a new range of annexes, showing that the number of white premises had fallen by a further 18,290 to 78,750. DfE also published a list of postcodes where changes had occurred. The changes have pushed the deadline of the tendering process back to 5 May, with the contract award now expected in September 2020.

It doesn’t appear that there will be any resistance to the rolling out of the plan from the political point of view, with Economy Minister Diane Dodds MLA, Sinn Féin West Tyrone MP Órfhlaith Begley and Secretary of State for Northern Ireland Brandon Lewis MP having all repeated their commitment to the provision of rural broadband recently. Some concerns, however, have been expressed about the idea of Project Stratum as a rural broadband scheme and what exactly is meant by “rural” within the context of the plan. With the “white” map containing concentrations of markings in urban areas such as Magherafelt, Dungannon, Enniskillen, Lurgan and even parts of Belfast, it has been stressed that the investment must reach truly rural areas in order to meet its goals and transform the connectivity in these areas.

The prospect of price divergence has also been raised, with it being stressed by some politicians that the Government must ensure an “equality of treatment for rural dwellers”. As the private company awarded the tender will make up whatever funding is required after the £165 million of public funding, there are fears that premises in the most rural areas, where it will cost the implementing company more to connect premises to NGA broadband, will have to pay higher rates for their connections. Sinn Féin MLA John O’Dowd has said that price equality should be built into any tender agreement that is awarded and that the principle of recipients being charged the same prices be at the “heart of the process”.

Ofcom’s Connected Nations Report 2019 reported Northern Ireland to have a lower rural 30+ Mbps rate than England, Scotland and Wales, with just 68 per cent of rural premises able to access such speeds. With the procurement process now mid-tender, Northern Ireland has the opportunity to bridge that gap.