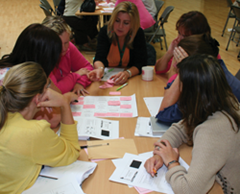 Belfast Girls Model School principal Johnny Graham talks to Peter Cheney about how it used its new build to improve education in its community.

Many schools across Northern Ireland are opening their doors before, during or after school hours to other local groups, in a bid to build up links between them and their communities. For the Belfast Girls Model School, in North Belfast, a £26 million new build project two years ago gave the opportunity to do this on a major scale.

The school had opened up its facilities to the community before but, for a long time, the building was so old that many local people didn’t want to come in. As principal Johnny Graham relates, staff were finding that “a lot of the girls weren’t getting the support that they needed” in the community. Essentially, they wanted the community to “buy into” education and therefore help the pupils.

In 2004-2005, the school carried out an audit by asking parents and local residents how the school could cater for them. That ‘community dimension’ was incorporated into the new build which opened in 2010, by opening the North Belfast City Learning Centre on the same site.

Many parents now come to night classes, ranging from meditation to computing and astronomy. The ‘electronic village hall’ is an ICT suite for local people, and other services include hair and beauty training, a crèche and community health clinic.

Its sports halls and sports grounds are now open Monday-Saturday. The Belfast Knights wheelchair basketball club and local football teams (from both sides of the community) train on the site as well as camogie and hockey teams. “For me, it’s fantastic that people can come here and feel safe,” Mr Graham adds.

An e-learning company books rooms and uses them for desktop publishing courses. Separate community entrances allow easy access for local visitors, so that the school day is not disrupted.

Primary schools from the controlled and maintained sectors also come in to use the facilities, including science classrooms, and a theatre and multimedia suite. “A primary school,” he notes, “cannot afford to have all this specialist equipment but what we can do is provide 10-15 week courses and bring P1s, P2s and P6s up here.”

The facilities are managed as a social enterprise, run by the charity Artemis, which re-invests profits so that the school can provide more facilities and charge low prices.

While there was a risk that the new school could have turned into a “white elephant,” the principal is “very proud” that a wide range of people from the community are now using its facilities: “Everything is being used, some things to full capacity [and with] other things we are near full capacity but each year since we started in 2010, the usage has gone up.”

Over the same time, the school has seen its GCSE and A-level results rise. Parents come up to school after school hours for the classes, and a social evening for year 8 pupils has helped teachers and parents to mix more informally. One teacher is employed as the full service school coordinator and spends most of her time working on how to develop community use.