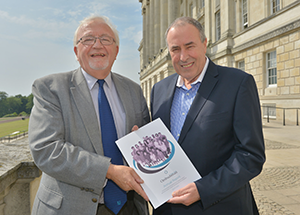 Perceived health and social care failings have continued to dominate the work of the Northern Ireland Ombudsman, however there have been reductions in complaints across the wider remit. agendaNi reports.

Northern Ireland Ombudsman Tom Frawley has used his 15th annual report to highlight the concerning volume of health and social care complaints that his office has continued to receive. While there was a 9 per cent reduction in these complaints between 2013-2014 and 2014-2015, this is negated by the year-on-year increases which occurred since 2009. The volume of HSC complaints increased by 81 per cent over the last five years.

The two statutory offices of Assembly Ombudsman for Northern Ireland and Northern Ireland Commissioner for Complaints have an exceptionally wide remit. As Assembly Ombudsman, Frawley has responsibility for investigating maladministration regarding the actions of the Stormont departments and their associated bodies. The Ombudsman’s brief also extends to the investigation of misconduct by North-South implementation bodies and the administrative failures of devolved tribunals.

In 2014-2015 the Ombudsman received a total of 830 complaints, a 15 per cent decrease on the previous year. Indeed, complaints regarding government departments and arising from planning matters are both down 26 per cent. The most significant decrease emerged from complaints which fall outside of the Ombudsman’s jurisdiction; the figure down to 32, a reduction of 63 per cent.

Frawley commended the efforts of the Head of the Northern Ireland Civil Service and the Permanent Secretaries Group to ensure a greater internal handle on complaints. He noted: “This increased focus on good complaints handling at source is to be commended and encouraged as it allows bodies to take ownership of complaints and to seek to learn lessons from those complaints in order to improve public services.”

Despite the expansive remit of his office, complaints concerning the health and social care sector amount to 41 per cent of those received by the Ombudsman. Due to their often complex nature these complaints translate into more than half of the Office’s workload. Among the health and social care issues dealt with by the Ombudsman in 2014-2015, 62 per cent concerned clinical decisions, treatment and social care.
Frawley commented: “The investigations of a complaint regarding clinical care and treatment are both complex and extended, typically requiring the advice and comment from a wide range of different specialities or professions. An underlying issue in many of the complaints brought to me is a breakdown in trust between the patient, their family and the HSC body being complained of.”

The Ombudsman also outlined a sample of three significant investigations which were conducted within the last reporting year. In one instance, the Ombudsman’s office uncovered a series of failings within the Belfast Health and Social Care Trust which resulted in an avoidable seven to eight week delay in the treatment of a patient who subsequently deteriorated and died. In an additional investigation concerning the planning approach to a tree preservation order, the Ombudsman found no evidence of maladministration in relation to a Department of Environment decision and the main issue of complaint was not held. A third complaint made against a Department of Education decision on a school admission did not reveal any evidence of maladministration. However, these case studies further highlight the Ombudsman’s dual role of offering redress to those who suffer an injustice while seeking to improve public administration by recommending changes in practice or policies for the benefit of citizens.

Highlighting the pressures currently faced by the healthcare system, Frawley spoke with BBC Radio Ulster’s Good Morning Ulster programme and emphasised the perceived lack of empathy show by healthcare professionals towards patients. Arguing for a return to an enhanced level of personal rapport and contact with patients he stated: “I think we have to find ways to re-engage that will give patients that confidence back, because they believe in the health service, they value the health service and ironically for me, the ultimate protection of the NHS that we all value is the public believing in it.”