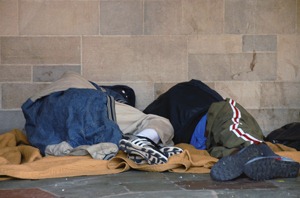 The Homelessness Strategy has four strategic objectives which the Department for Social Development, the Housing Executive, other relevant housing providers and the community and voluntary sector must implement by 2017. These are:

Amid concern that the economic downturn will force more families onto the streets or onto friends’ sofas, the strategy, published by the Housing Executive, explains that 10,443 households were classified as being homeless (1.47 per cent of all households) in 2010-2011. This is up from 8,934 households in 2009-2010. The most common reason (for 2,644 households) was that the accommodation was ‘not reasonable’ (e.g. elderly people who cannot manoeuvre around their home).

This was followed by family or sharing breakdowns (1,995) and the loss of rented accommodation (1,200).

The strategy points out that the nature of the homeless population has changed, including ex-offenders, young people, older people, those leaving care and migrant workers, rather than predominantly single men.  Increasing numbers have mental health and addiction problems and other complex needs and require intensive support.

There are three categories of homelessness in the province:

The strategy’s aims include ensuring that health and social services will provide holistic assessment services outside Belfast by 2014-2015. Tenancy support assessments will be introduced by 2013-2014 to help Housing Executive tenants sustain their tenancies. Family mediation and intervention programmes will be examined (from 2012-2015) as a means to help young people sustain Housing Executive tenancies.

A review of the current temporary housing portfolio (i.e. 20 Housing Executive hostels, 70 voluntary sector hostels and access to over 800 private single-let properties) will be completed by 2014-2015, examining its strategic relevance, financial viability and access criteria. The average length of time in temporary accommodation should be reduced from 46 weeks to 40 weeks over the lifetime of the strategy.

To help alleviate the worst effects of the welfare reforms, the Northern Ireland Executive should consider increasing the funding for discretionary housing payment and other funding streams similar to Great Britain, to be targeted at those struggling to meet their rental obligations and who are facing eviction by their landlords.

Existing services and information sharing arrangements on the needs of those with alcohol addictions will be completed by 2013-2014 and a new Belfast rough sleepers strategy will be available by 2014-2015.

Vulnerable households are to be helped by ensuring that victims of domestic violence can stay in their homes.  Stable housing arrangements and effective monitoring should be in place in order to minimise the risks posed by sexual and violent offenders (by 2015-2016).

The need for a bespoke accommodation facility for women offenders will be researched in the next year and the specific housing needs of migrant workers identified by 2013-2014. The extent of rural homelessness will also be examined.