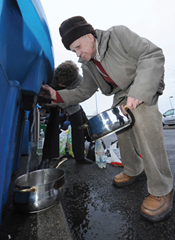 agendaNi reviews a tumultuous year for Northern Ireland Water which faces two investigations into the water crisis and a third into its procurement procedures.

Northern Ireland Water (NIW), which refers to itself on its website as the “trusted and reliable provider of Northern Ireland’s most essential public service” is currently facing an inquiry by the Utility Regulator following the crisis which left 60,000 homes with little or no water over Christmas and the New Year.

Simultaneously, the Department for Regional Development is undergoing an inquiry by two independent investigators into its role in the water crisis. They are Philip Holder who has over 25 years experience in utilities and was Managing Director in East Surrey Holdings, and Heather Moorhead, the former Chief Executive of the Northern Ireland Local Government Association.

Throughout the thaw which followed unprecedented temperatures of up to -21°C, pipes burst and reservoirs emptied. In response NIW cut off water supplies (in some instances without warning), people had to queue to have showers in leisure centres and 160,000 litres of bottled water was supplied by the Scottish Government. In addition, the NIW call centre received 600,000 calls from 26 to 28 December which were not dealt with adequately.

Overall operations at the company were described as “shambolic, ineffective, and not fit for purpose” by First Minister Peter Robinson, while deputy First Minister Martin McGuinness said that people at NIW needed to be held to account because the thaw should have been anticipated.

A Regional Development Committee meeting into the incident on 6 January heard that a memo had been sent to NIW staff on 23 December indicating that sufficient preparations had been made for the thaw. NIW Chief Executive, Laurence MacKenzie’s decision not to appear before the committee was criticised by chairman Fred Cobain. “This is a huge issue, not just for this committee and the Assembly, but for the thousands of people who have suffered. [MacKenzie] has a responsibility to those people.” Cobain said.

The committee stated: “It is our view that there was a complete breakdown in communication during the water crisis. This is particularly disappointing as money was specifically set aside in the company’s strategic business plan to invest in improving information and communication systems. The committee was also surprised to hear that crisis planning was not a formal item on agendas for the board or senior management meetings before Christmas.”

It added: “Based on what we heard today, it is [our] view that funds set aside for mains water rehabilitation may be inadequate to ensure Northern Ireland Water’s infrastructure is fit for purpose.”

Calls were made for MacKenzie and Regional Development Minister Conor Murphy to resign. MacKenzie stepped down on 5 January but the Minister insisted that NIW was independent from his department and said he was “quite content about his role in all of this.” He claimed he would not step down unless Sinn Féin asked him to.

This follows a year of controversy in NIW over procurement issues. A report by the Public Accounts Committee into procurement and governance at NIW is due to be released in February.

25 February 2010
An internal audit found that NIW was responsible for a breakdown in procurement procedures which meant that 74 contracts worth £28.5 million were awarded without being correctly tendered.

March 2010
An independent review team (including head of Phoenix Energy Peter Dixon) was set up to find out who was responsible. Consequently, the Minister sacked three NIW board members along with the company chairman Chris Mellor.

17 August 2010
A UTV Live investigation alleged that DRD Permanent Secretary Paul Priestly sought to change the wording of the first draft of the independent review team’s report, in order to dilute criticism of DRD and focus blame on the non-executive directors. It is also purported that Priestly had penned a draft letter to be sent from Dixon to the PAC, criticising the committee for questioning his independence during the independent review team’s investigation. Dixon later withdrew the letter.

18 August 2010
Priestly was suspended to facilitate an investigation after these revelations.

7 September 2010
The PAC called for the Comptroller and Auditor General to examine the procurement concerns. The Northern Ireland Audit Office released its report on 9 December which said: “Irregular expenditure was incurred by Northern Ireland Water which amounted to £5.3m in 2009-2010, £9.2m in 2008- 2009 and £6.5m in 2007-2008. Significant exceptions in the procurement and contract management framework of control and application of the financial delegations framework were identified.”

These issues are currently being considered further by the PAC. That report is due to be released this month.

20 September 2010
The Consumer Council left the Water Stakeholders Partnership Agreement due to “a breakdown in trust.”

The partnership agreement was set up by Minister Conor Murphy in 2008 and includes DRD’s water policy division, NIW, the Utility Regulator, the Northern Ireland Environment Agency and the Drinking Water Inspectorate.

14 December 2010
The Utility Regulator’s cost and performance report into the first three years of NIW said that the body needs to cut costs by 40 per cent in order to meet the benchmark set by English and Welsh water bodies.

27 December 2010 – 1 January 2011
Almost 60,000 homes had restricted or no water when the coldest UK winter on record gave way to a rapid thaw, resulting in burst pipes and decreasing water levels in reservoirs. Chief Executive Laurence MacKenzie and Minister Conor Murphy came under pressure to resign.

30 December 2010
An emergency Executive meeting was held to discuss the water crisis.

5 January 2011
MacKenzie resigned amid intense criticism for a lack of preparation and poor management. Conor Murphy defended his position, telling Good Morning Ulster: “NI Water have an arm’s length arrangement where they are responsible for their own operational response, their own communication strategy and plans for emergency situations, which are not part of the department.”

The Regional Development Committee criticised Mackenzie for not appearing before the committee.

18 January 2011
A leaked draft report, commissioned by the Public Accounts Committee criticised how Northern Ireland Water handed out government contracts without competition. It also described the department’s arrangements for overseeing NI Water as “the worst of all possible worlds.”