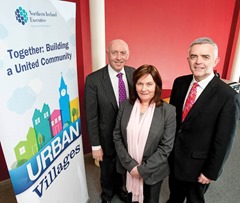 The regeneration projects will be based in the Markets, Sandy Row and Donegall Pass in South Belfast and the Bogside and Fountain areas of Derry.

Urban villages are part of the Together: Building a United Community strategy published in May 2013. The ten-year plan stated that urban villages would “create and stabilise change” within communities. This latest announcement makes a total of four schemes announced so far.

Jonathan Bell said: “We aim to tackle the low social capital that can create instability and disengagement in order to improve the life experiences of communities.”

Jennifer McCann added: “By creating these urban villages, the Executive is offering a real opportunity for residents to shape and influence their areas, based on what they see as the local priorities.”