Over 11,000 people have been waiting more than a year for a first neurology outpatient appointment, a review launched following the recall of over 2,500 patients has revealed.

The interim report assessing the need for reconfiguration of neurology services out to 2035 described a service falling short in meeting demand in workforce and in meeting the needs and expectations of people with neurological conditions and their carers.

The report, which is part of an initial assessment before a final report to be published in March, outlines a waiting list for patients waiting for a first consultant-led neurology outpatient appointment of some 17,987 people in June of 2018, almost 16,000 of whom had been waiting longer than nine weeks. 14,168 people had waited more than 18 weeks and 9,325 were waiting more than a year.

The review was launched following the recall of 2,529 neurology patients on 1 May 2018 after concerns were raised about the actions of one of Belfast Trust’s consultants. In July, the Department announced a comprehensive regional review of neurology services covering all neurology specialties.

Dr Michael Watt, who worked at Belfast’s Royal Victoria Hospital, was suspended in summer 2017 after an internal Belfast Trust review led to the Royal College of Physicians being asked, in July 2017, to conduct a wider independent review of his practice.

Little detail around why the large recall had been issued was given, however, a report into the outcome of the patient recall was due to be published by the Department of Health in June 2019 before that was postponed.

The report has still not been published by the Department but an investigation by the BBC obtained details of the report which indicated that the neurologist carried out hundreds of unnecessary procedures on patients and was responsible for a spike in the number of epidural blood patches (a rare neurological treatment) carried out in the Belfast Trust in 2015 and 2016.

It also found that one in five patients were told at the recall they had been misdiagnosed.

Following the investigation, Watt publicly offered “sincere sympathy” to those affected. In November, the PSNI met with officials in the Department of Health to discuss the issues and are determining if any potential criminal offences can be identified.

In a statement, Detective Superintendent Jason Murphy said: “The Department of Health has provided some initial material for the PSNI to consider but we await further material before being able to take an informed view and assess how best to move forward. It is likely that this will take some time.”

The BBC investigation published views by Watt given during a confidential medical consultation, during which he had done his best and sought to act in the interests of his patients whilst handling a big caseload. He added that this was against a backdrop of a shortage of neurologists and felt that he was being scapegoated.

Capacity challenges are prominent in the neurology review interim report. Around 18,500 patients are presented for first or new referrals annually in Northern Ireland. However, the capacity in the system is much lower, averaging at around 12,000 patients and resulting in growing waiting lists.

At the time of the report, there were 21 Consultant Neurologists in Northern Ireland, three of which work part-time, and 37 nurse specialist posts within neurology service. Evidence points to insufficient consultant neurologists to deliver a 24/7 on call rota on any site other than the Royal Victoria Hospital (RVH), meaning insufficient capacity to ensure that all patients admitted with a neurological emergency can be provided with advice within 24 hours as advised by the Association of British Neurologists (ABN).

Deepening these insufficiencies are challenges in developing neurology expertise among trainees. A maximum of just two core training places out of 138 will be attached to neurology and shortages also extend to nursing staff, with Northern Ireland having significantly fewer Epilepsy, Multiple Sclerosis and Parkinson’s Disease specialist nurses than is recommended by the National Institute for Health and Care Excellence for the population.

An HSC Board Neurology modernisation programme, looking at shorter term improvements while the strategic review of neurology is ongoing has identified three priorities for action, including:

1. To secure and fund additional training places in Neurology to give some junior doctors more experience of the specialty.

2. Support the development of new ways of responding to patients suffering from some of the more common conditions such as headache.

Recommendations by the Neurology Review Team are to be considered alongside investment required in the development of an implementation plan and will be incorporated into a framework setting out the optimal configuration for future neurology services through to 2035. The is set to be published in March 2020 and further public consultation may be required depending on the nature of the recommendations. 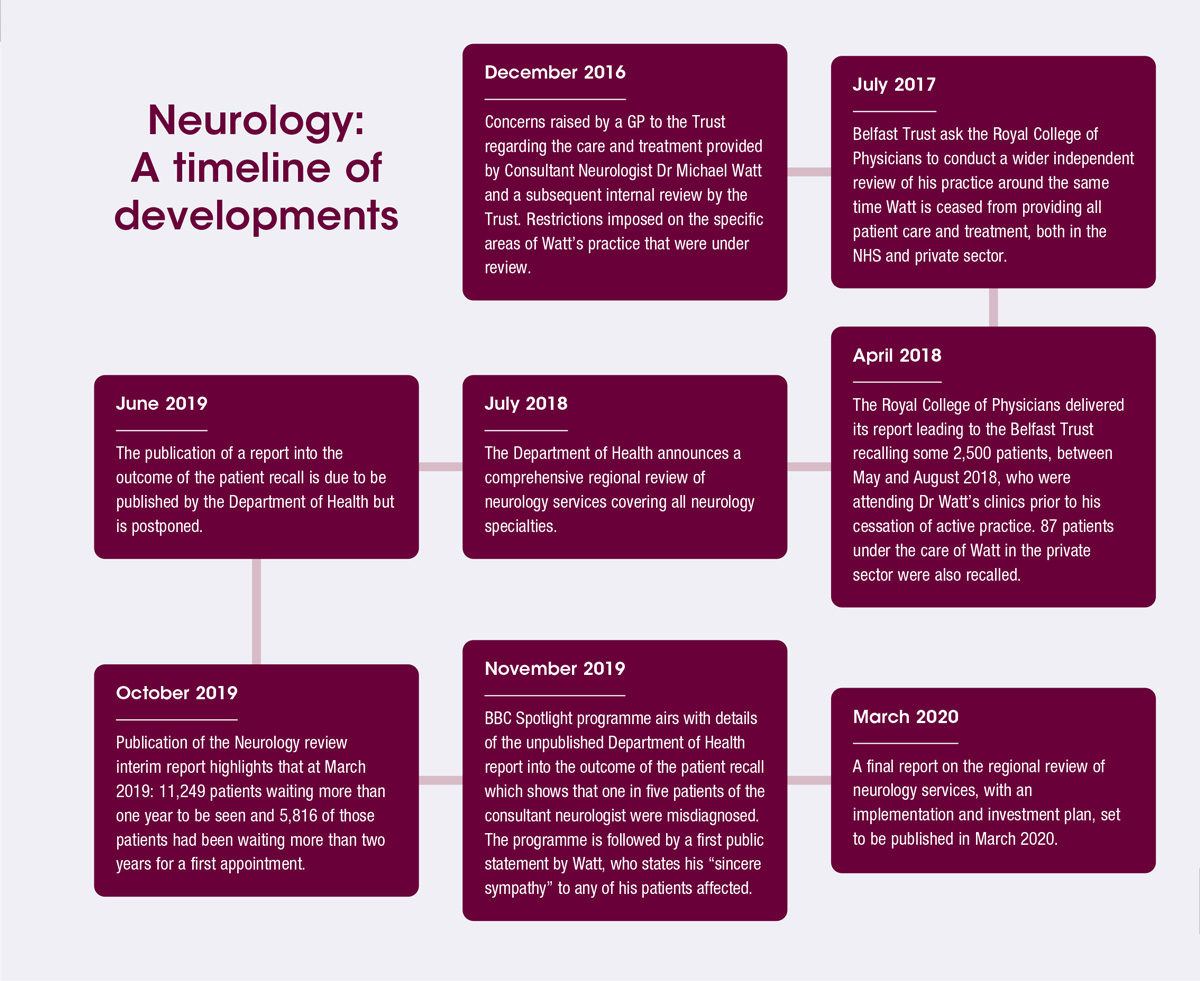