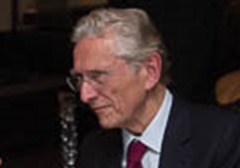 Norman Fowler led the UK’s first campaign against HIV/AIDS and wants to see a step change in preventing the disease. The former Health Secretary talks to Peter Cheney.

Three decades on from the UK’s first HIV diagnosis, the virus continues to infect at least 6,000 people and results in 500 deaths every year. That’s why a retired Cabinet Minister wants governments across the UK to massively increase their spending on preventing a disease that lasts a lifetime and still attracts discrimination.

Norman Fowler left journalism to enter Parliament in 1970 and was Health and Social Services Secretary from 1982 to 1987. The HIV/AIDS media campaign was “one of the most important things we did” and he keeps up a strong interest in the subject. Fowler spoke to agendaNi at the Conservative Party conference where he promoted his new book: ‘AIDS: Don’t Die of Prejudice’.

“It was a new disease,” he recalled. “No-one knew what the causes of it were and we had no drugs or anything to treat it with. We had to mount a massive public education campaign. It was not necessarily the most popular [and was] controversial with the public. In fact, it was tremendously effective.”

HIV diagnoses had increased from one in 1981 to 3,000 four years later. The campaign helped to reduce new cases to 2,000 in 1988. The rate of infection escalated in the early 2000s, partly due to less public awareness.

The case for boosting investment in prevention is starkly clear when the Westminster Department of Health’s HIV budget is considered. £4 million is spent on direct advertising and £1 billion on treatment.

“Of course, if we did do that,” he added, “then it would have the impact that the treatment costs would not be so great.” Quite often, the main obstacle is the Treasury rather than the Department of Health. Fowler found that he could always persuade Treasury officials that “people are there to be treated because they were there” but there was a shortage of imagination about how prevention could reduce the costs of care in the longer term.

The post of Health Secretary is among the most pressurised in government. “You were constantly on your feet in the House of Commons and you were constantly in television studios and radio studios, trying to explain your policy,” Fowler reflects. “The great thing about it was that it was worthwhile. There was no question about that.”

In total, 133,000 people across the UK have been diagnosed with HIV to date, of whom 28,000 have developed AIDS and 21,000 have died of the condition. Ninety-four people were diagnosed as HIV-positive in Northern Ireland in 2013, bringing the total number of cases here to 1,062.

Within the UK, Northern Ireland has experienced the largest proportional increase in new HIV diagnoses since 2000 and around 850 people here are currently living with the condition.