With everyday law and order now run from Belfast and Dublin for the first time since 1972, agendaNi reviews the main parts of the Republic’s justice system. 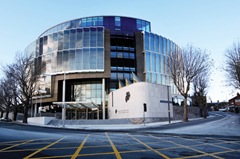 Founded by Michael Collins as an unarmed force in 1922, following the disbandment of the Royal Irish Constabulary, the Garda became a national force when the Dublin Metropolitan Police merged with it in 1925. It is responsible for the Republic’s national security as well as the traditional crime investigation, public order and road safety duties. The Commissioner handles the day-to- day management of the force, while the Justice Minister is accountable to the Government and Oireachtas for its overall performance. Complaints can be submitted to the Garda Síochána Ombudsman Commission.

Most crimes and offences are prosecuted in the name of the people of Ireland. The office was established by the Prosecution of Offences Act 1974 and makes decisions independently of all other organizations, including the Government and Garda. Minor prosecutions are carried out by gardaí. The Directing Division decides whether or not to take a prosecution. Approved cases and then prepared or conducted by the Solicitors Division, for Dublin hearings, and ‘local state solicitors’ outside the city.

The Republic’s justice department and its agencies cover the criminal justice system, tribunals and immigration. In June 2010, equality policy was transferred from its remit to the Department of Community, Equality and Gaeltacht Affairs; this includes the integration of immigrants. Current minister Dermot Ahern is a TD for the border constituency of Louth and previously served as Foreign Affairs Minister (2004-2008).

Originating in English common law, modern Irish law operates within the framework of the Constitution of Ireland (Bunreacht na hÉireann). Dáil courts were set up during the War of Independence and the Courts of Justice Act 1924 established the current system.

District courts hear minor criminal cases. Circuit courts cover specific regions and hold jury trials. Murder, rape and other serious crime cases are heard by the Central Criminal Court. Terrorism falls within the Special Criminal Court’s remit. The Court of Criminal Appeal hears appeals from the circuit, central and special courts. The Supreme Court is the court of final appeal whose decision, the constitution states, “shall in all cases be final and conclusive.”

Brehon law, before the Norman invasion, emphasised the local management of offenders in families or communities and common law allowed for offenders to be ‘bound over’ to keep the peace. Modern probation officers emerged in the 19th century and were formally recognised by the Probation of Offenders Act 1907. The current service was established in 1962.

The Republic has 14 prisons i.e. 11 of the traditional form, two open prisons and a training unit to help prisoners return to work. Regular inspections are carried out by the Inspector of Prisons (An Chigire Príosún). The island’s first regular prison service was the Convict Prisons Board, founded in 1854; it was succeeded by General Prisons Board (1877-1928), direct control by the Department of Justice (1928-1999) and the present-day service (from 1999). Mountjoy is the state’s largest prison (590 places) while Portlaoise (399 places) houses paramilitary convicts.

The Attorney-General is constitutionally “the adviser of the Government in matters of law and legal opinion”. He is assisted by five groups of ‘advisory counsel’, of which Group A specialises in criminal law. In addition, ‘parliamentary counsel’ draft legislation on behalf of ministers and ‘state solicitors’ represent the state in civil cases. His office also publishes an electronic Irish Statute Book: www.irishstatutebook.ie