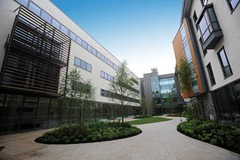 The current Investment Strategy covers 2011-2021 and envisages £8.2 billion of investment over the next five years. agendaNi summarises the progress to date and plans going forward.

Almost a quarter of all infrastructure funding will go to health, primarily hospitals and primary care facilities. Twenty-nine of the 47 projects have been completed to date including the South West Acute Hospital, the Downe Hospital redevelopment, the Regional Adolescent Psychiatric Unit at Newtownbreda, and an extra 24 A&E beds at Antrim Area Hospital.

Over the next five years, the strategy should result in the completed redevelopment of the Ulster Hospital, a new critical care wing at the Royal Victoria Hospital, and a large community treatment and care centre for Banbridge. Other items will include a new MRI scanner for the Royal Belfast Hospital for Sick Children and the refurbishment of ambulance stations in Ballymena and Enniskillen.

The majority of this funding (£1.19 billion) is allocated for the road network, followed by £280 million for public transport, £95 million for energy and £6 million for telecoms.

Forty projects have been set up, of which 23 have been completed so far. Achievements include a series of distributor and link roads in Newtownards, Enniskillen, Ballymena and Derry, 14 new double-decker buses for Belfast, two new Class 4000 trains, and the redevelopment of Portadown railway station.

By 2021, the Executive plans to complete the Coleraine-Derry track renewal, the A8 dual Belfast-Larne carriageway, the widening of the A2 at Greenisland, the dualling of the Frosses Road north of Ballymena, and the Magherafelt bypass. Other projects include Executive support for Gas to the West and continued province-wide broadband funding.

Skills investment is dominated by the ‘schools and youth’ infrastructure category (£1.23 billion). In addition, £180 million is allocated for further and higher education and £70 million for libraries. Sixty-two projects have been completed with another 21 in the delivery phase.

The vast majority of environmental investment will be made in water and waste water infrastructure (£990 million). Other priorities include flood risk management (£45 million), waste management (£12 million) and an ‘environment’ sub-category (£24 million) covering other areas of the DoE’s work.

Of the 308 projects, sixteen have been fully completed. Flood maps have been prepared and several flood alleviation schemes along with storm sewer extensions and upgraded waste water treatment works. The arc21 mechanical biological treatment facility is the largest single project still to be delivered (£320-370 million). DoE projects include heritage-led development schemes, the new driving licence system and the Roe Valley hydro-electric scheme.

New flood defences will be built or upgraded in Banbridge, South and East Belfast, Beragh and Newry. The most significant water projects include the Enniskillen treatment works, the Ballydougan-Newry main link reinforcement, the Dungannon-Castor Bay strategic trunk mains and the onward link to Belfast.

The Desertcreat joint training college project has been suspended due to financial difficulties. It would have trained police officers, prison officers and firefighters on a single site and alternatives are now being considered by the justice and health ministers.

A new 360-cell block at Maghaberry (to be completed in 2018) will house remand and short sentence prisoners and help to reduce overcrowding. The Prison Service plans to build a women’s facility at Hydebank Wood when funding becomes available. Planning permission has been granted for a new forensic science laboratory at Carrickfergus.

Social investments are spread across 433 projects, of which 350 have been completed. Significant examples include the Lyric Theatre, the MAC and the new Public Record Office in the Titanic Quarter. Many completed projects are small scale social housing schemes which make a real difference to the quality of life for those living in them.

Projects due to be delivered by 2021 include a range of public realm schemes, the Queen’s Parade retail and hotel development in Bangor, the continued roll-out of social housing and navigation routes in the Lough Neagh basin.

The 32 ‘productive’ investments are directly related to the economy: £145 million to support enterprise and innovation policy; £128 million for public sector infrastructure; £76 million for rural and primary industries; and £36 million for tourism.