David Whelan visited Brownlow Integrated College in Craigavon, the first school to transform to integrated status in Northern Ireland, to take the temperature of progress, demand and challenges in developing integrated education.

“Why do we continue to educate our children separately?” asks Kieran McKernan, a member of the senior membership team at Brownlow, shortly after I walk into the school’s campus in Craigavon.

It’s a question that I, like many, haven’t given much thought to. Instead, we have largely accepted that the school system in Northern Ireland is what it is. You are educated with your peers, often in a school chosen by your parents for its location, its reputation, or its ethos.

That Protestants and Catholics are largely educated separately is widely accepted as the norm – even though as a society we have recognised that greater levels of integration and cultural acceptance are necessary for progress from our troubled past.

“As a society we recognise that integration, not just in education, is beneficial in breaking down those cultural barriers that have been built up over many years. Most people you speak to have an understanding of this but when it comes to sending our children to school, we continue to opt for segregation.”

McKernan understands that the problem is much more systematic than a simple choice. Integrated education has suffered from a lack of political support, meaning funding for its wider roll-out has been severely limited.

As we make our way towards his classroom to continue the discussion, I appraise the many pictures and displays lining the corridors and halls. It is, understandably, just like any other school.

“People have particular perceptions of an integrated school and those perceptions are usually based on having never experienced one,” he says. “One particular perception is that in order for integration to work there must exist a cultural vacuum, where certain issues are taboo. That’s simply not the case. In this school, where issues have arisen, we meet them head on and we lay them out for discussion. As a result, the young people feel understood but also get an understanding.”

McKernan admits that the approach to dealing with areas deemed contentious has not always been so straightforward and is something that has evolved over 30 years of integration.

To fully understand Brownlow’s journey, its history must also be considered. Opened in the 1970s as a state school, Brownlow High School largely served the Protestant communities in its surrounding area, with little cooperation with Lismore Comprehensive School, a nearby Catholic school. In the mid-80’s, the departure of the Vietnamese boat people, refugees who located in Craigavon, and a large cohort of army children, raised concerns about numbers in the school and its economic viability. 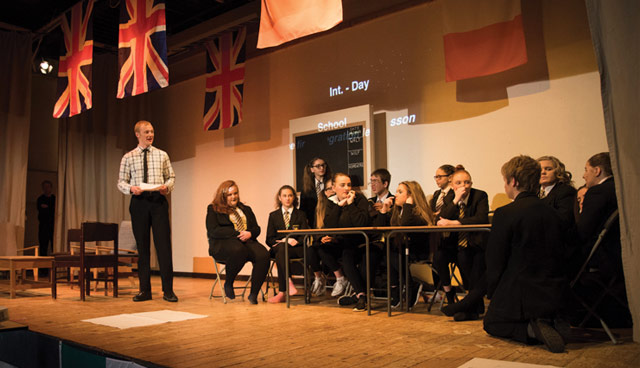 Transformation to integration was mooted in the late 1980s, for the school which had a Catholic population of just over 5 per cent. While some integrated schools were in existence, none had undergone transformation, as was being proposed at Brownlow.

Despite widespread opposition, mostly heard louder than those in support of the move, in 1991, Brownlow was given permission to designate itself as a controlled integrated school.

This, McKernan explains, was only the start of the journey. “I don’t think anyone was under the illusion in September 1991 that Brownlow was an integrated school.” He highlights that even within the school there was still some contention around the switch, with some teachers openly voicing their opposition.

Fiona Darragh, Head of Languages, at Brownlow says that to some degree, this opposition helped the school’s journey: “In working with people who hadn’t bought into integration there was more of a challenge to the system. They made you work through those areas to find solutions and pathways forward.”

Brownlow’s substantial growth in the mid to late 90s helped with the integration journey. More Catholics were able to be recruited for staff positions and bigger enrolment numbers meant a more integrated mix of pupils.

Darragh highlights the value of the school’s Hearts and Minds society (HAMs) in ensuring Brownlow was not only prepared to deal with contentious issues head on but also to evolve for future generations. The society, which is made up of teachers and pupils, discusses and shapes policy direction.

“Rather than shy away from cultural or identity issues, we have taken the approach to put them front and centre,” she says. “We get buy-in which breeds a better understanding and as a result the issues aren’t as topical as maybe is expected from those outside of the school. The most important thing is education, which brings better understanding. It’s about ensuring that children don’t feel their culture and identity is being eroded but that they have an informed understanding of other cultures too.”

Ben Tweed, a Year 12 pupil, agrees with this assessment. Having arrived at Brownlow from a predominantly Protestant school, he believes that Brownlow has given him a better perspective of cultural integration. “I’m friends with people that I might never have met had I not come to Brownlow,” he says, adding: “A lot of the stereotypes or assumptions exist outside of the school. For example, outside of the school Gaelic football is mostly played by Catholics but here in the school there are Protestants that play too. It just happens, there is no talk about it because it’s not a major issue.”

McKernan suggests that examples like this are evident throughout the school and an indication that younger generations are not simply accepting the cultural barriers being passed down to them. This he says, is a massive positive.

“As a parent, I know that my children are educating me on issues around identity and culture. Young people can challenge our pre-held perceptions. If we have a whole cohort of young people going home and challenging stereotypes then that’s what changes society. It’s an example of how beneficial the wider roll-out of integrated education can be for society.”

Before any wider roll-out can be considered however, Brownlow has its own challenges in selling the ethos of integrated education. In 2012, when the school had its highest enrolment figures, an application to deliver A-Levels within the school was rejected on the basis that the offering would duplicate services in the area – despite Brownlow being the only integrated college.

As a result, the school’s enrolment levels are intermittent, meaning that funding is limited. This, Darragh explains, has a cyclical effect in that less funding means less resource to enhance the school’s reputation to attract more young people.

Brownlow is actively working to change the circumstance. This year for example, the school has for the first time appointed a dedicated marketing committee, headed up by a past pupil, aimed at delivering new and innovative ways to promote the school’s attractiveness.

Childcare provision in Northern Ireland and beyond