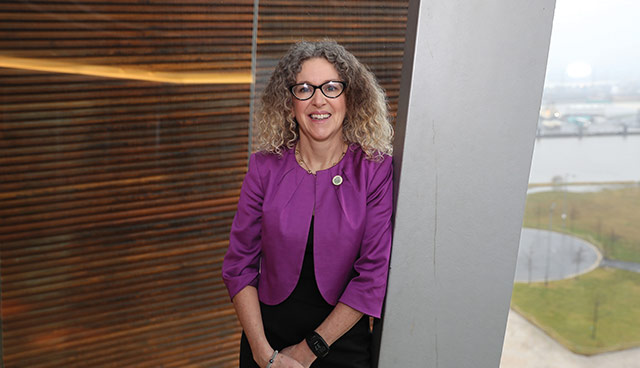 Deputy Secretary Louise Warde Hunter discusses the direction being taken by the Department for Communities (DfC) and challenges being faced in developing housing policy.

The head of Housing, Urban Regeneration and Local Government at the Department for Communities outlines that the draft Programme for Government (PfG) is guiding policy during the prolonged period of “limbocracy” at Stormont.

The key indicator for housing contained in the draft PfG is the improvement of the supply of suitable housing, with the barometer being a reduction in the number of households in housing stress. Warde Hunter outlines that at the core of achieving success in these areas is development, pointing out that over the past five years the Department, along with the Housing Executive, have started over 7,660 new social homes against a target of 7,500.

A greater rate of development, while demanding, will be necessary to respond to the rising levels of housing need across Northern Ireland, with any incoming minister likely to place new-build social housing as a key priority. For this reason, Warde Hunter explains that her housing team within DfC must push ahead in their preparation work.

“We aim to be able to make a developed and coherent presentation to any incoming minister, with clear proposals to help them make informed decisions. Regrettably, while we don’t have our own elected officials at the moment, the work continues to be able to shape and inform what a future minister or ministers may wish to do.”

The Deputy Secretary believes that housing need in Northern Ireland is being characterised by four key market trends, which are:

• an increase in households;

• a shift from renting towards home-ownership;

Population growth in Northern Ireland increased by 15 per cent between 1991 and 2015, driven by more people living longer and net inward migration. At the same time, the size of the average household in Northern Ireland has reduced from 2.9 people to 2.5, meaning there are now more households which need accommodated.

These shifts and trends have informed the interventions proposed under the draft PfG, which range from the delivery of new social and affordable homes to specific initiatives, such as the Supporting People Programme or implementation of the Private Rented Sector Review.

Offering a focus on some of these initiatives, Warde Hunter describes the Department’s commitment, provided adequate funding is available, to deliver 3,750 additional affordable homes across Northern Ireland by the end of the current PfG period. The majority of these homes will be delivered by the  Co-Ownership Scheme but around 700 will be delivered through ongoing pilot schemes such as Rent to Own and the Affordable Homes Loan Fund, explains Warde Hunter.

“The Department’s affordable home target is 750 homes per year over the PfG period and attaining that is going to be dependent on the Department receiving sufficient additional funding for the 2019/20 and 2020/21 financial years.”

Outlining that the primary source of funding for affordable homes is the Financial Transactions Capital Scheme, Warde Hunter explains that the Affordable Housing finance model is particularly suited to this funding method and the idea of generating sufficient receipts to meet repayments.

She adds: “We are keen to encourage and support further innovation in the development of affordable homes and our colleagues are developing a range of proposals around affordable housing that might be able to build and expand upon our current affordable shared ownership model.”

“Regrettably, while we don’t have our own elected officials at the moment, the work continues to be able to shape and inform what a future minister or ministers may wish to do.”

The Department are currently building a central Geographic Information System (GIS), a digital spatial catalogue of all registered public-sector land and property, aimed at addressing the supply of public land for housing and whether land is being efficiently utilised.

The Strategic Investment Board (SIB) estimates that, to date, 80 per cent of all surplus government land assets are sold or transferred for housing, of one tenure or another.

“This supports the view that a more detailed examination of government assets could result in the realisation of further opportunities to release land for housing. Frankly, I think this is an area of due diligence given the needs, requirements and demands of the sector.”

Working with the three major landholding departments (education, infrastructure and health), Warde Hunter highlights the longer-term potential for the catalogue to help facilitate the more useful utilisation of public land for purposes wider than housing.

In 2015, a review of the Supporting People Programme, which provides housing support services to over 18,500 vulnerable people every year, indicated 13 recommendations to improve efficiency and effectiveness. Following agreement of an implementation plan in 2016 by a cross-departmental steering group, Warde Hunter says that progress has now been made across all 13 recommendations.

Turning to the challenges, Warde Hunter acknowledges that the lack of a functioning Northern Ireland Executive is hampering the passing of key decisions and legislation in areas such as implementing the completed Private Rented Sector Review, approval of Housing Executive board appointments, the release of Fresh Start funding for construction of more shared housing and social housing reform, the long-term programme which failed to agree Executive approval.

Warde Hunter adds: “The need for reform of the Housing Executive has been well documented and clearly the current situation politically is very challenging. NIHE have had to have a rent freeze for the past three years and there are clearly major challenges there which relate to investment in existing stock.

“There have also had to be some decisions taken that we wouldn’t have wished to have had to do, such as the temporary suspension of the introduction of the Housing Executive’s Asset Management Strategy, acknowledging that it is currently unable to invest in the commonly adopted strategy.”

On the Budget, Warde Hunter outlines that with the 2018/19 budget now set, the Department has incurred a 4 per cent resource cut outside of protected areas. However, she describes the capital of £163 million as “reasonably favourable” in comparison to the previous year’s allocation of £122 million.

Looking forward, she highlights that work is ongoing with the Housing Market Symposium to support the Department’s development of evidence-based policy.