The Belfast homeless community has suffered five deaths in the space of seven weeks. 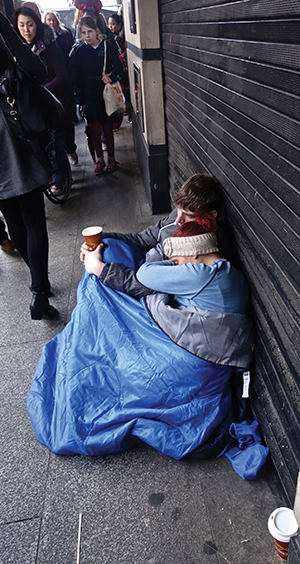 The homeless community in Belfast is in shock after the death of five homeless people in less than two months. An emergency summit to provide a ‘collective, strategic approach’ in response to these deaths will be hosted by the Simon Community in April.

The meeting will involve representatives from the housing, homeless and health sectors along with politicians and people who are homeless. They will be brought together to discuss how best to tackle the current crisis and ensure solving the problem is kept at the top of the Government’s agenda.

Speaking about the meeting, the Chief Executive of the Simon Community, Jim Dennison said that the deaths, while tragic, have brought some much needed focus on the urgent need to eradicate homelessness in Northern Ireland. The discussion will focus on a range of complex issues relating to homelessness including mental health issues, addiction and young people’s services. It will bring together a range of professionals from sectors beyond those with expertise in housing and homelessness.

Belfast’s former Mayor, Patrick Convery confirmed the issue was being discussed in council and called on various agencies to come together to offer a collaborative approach to deal with the needs of homeless citizens and ensure that no one else has to suffer the same fate. The deaths prompted a rally at Belfast City Hall with many calling for immediate action to help those in need.

A spokesperson from the volunteer group, ‘Hope Outreach for the Homeless’ has described the situation as a ‘nightmare.’ She said: “Yet again, we have lost another life on the streets of Belfast. I can speak for all of my volunteers and all the other outreach groups when I say we are just numb and devastated.”

At the time of writing a campaign to open empty buildings in Belfast to provide shelter for the homeless in Belfast has more than 26,700 signatures. Meanwhile Extern, a charity which provides a homeless support service, funded by the Northern Ireland Housing Executive and the Belfast Trust, says demand for its service has increased by over 50 per cent in the last two years. It also underlines the fact that homelessness is much more than just a housing issue.

The problem of homelessness is not an easy one to solve as many who sleep rough have other options open to them but feel safest on the streets. Beds are available in shelters but not everyone chooses to avail of this accommodation because of the differing circumstances each individual finds themselves in. The issue of homelessness is often about underlying problems, should it be mental health issues, addiction or relationship breakdowns. There is a wide range of reasons why people find themselves on the street and some people who are housed or are in hostels can sometimes feel isolated and longing for the companionship of the relationships they’ve built up on the street.