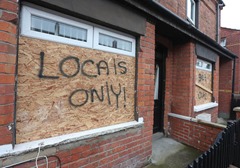 agendaNi examines how increased intolerance is resulting in more attacks against minorities.

The most recent statistics from the PSNI show a disconcerting increase over the last 12 months in most categories of hate crime in Northern Ireland. This continues a trend where instances of most kinds of hate crime have been rising steadily for the last three years.

Although there are various definitions, hate crime covers a multitude of offences which, despite differing manifestations and severity, are at their heart motivated by a hatred or prejudice against individuals or groups who fall into certain distinct categories. The two best known categories are crimes motivated by sectarian hatred (against Catholics/nationalists or Protestants/unionists) and crimes motivated by racial hatred, usually committed against Northern Ireland’s ethnic minorities. Together these two categories account for some 86 per cent of all hate crime: 50 per cent sectarian and 36 per cent racial. The other recorded categories of hate crime are homophobic and disability-related crime as well as other faith-related and transphobic crimes.

By contrast, there has been a real upsurge recently in racially motivated hate crime even though again there had been a distinct downward trend between 2006-2007 and 2011-2012. In 2013-2014, there were 691 reported cases of racially motivated hate crime, an alarming increase of 47 per cent on the previous year. The crimes themselves have involved anything from verbal abuse and intimidating graffiti, to attacks on houses and physical attacks on individuals. Those under threat or attack have mainly been recent immigrants from ethnic minority communities.

One explanation offered has been that racial hate crime has grown in line with the overall increase in ethnic minorities as a proportion of the Northern Ireland population. However, this contention is not supported by the numbers. Although there has been a significant increase in the number of people from ethnic minorities over the last decade, the immigrant population in recent years has remained relatively static while crime has soared.

Alliance MLA Anna Lo, herself a victim of racially motivated hate crime, believes that the main reason is heightened awareness of ethnic minorities and greater media coverage since the Troubles ended. She, like many others, is impatient for firmer action from government and more carefully chosen words from political leaders.

The PSNI has also reported that the bulk of racial hate crime has occurred in loyalist areas although it is certainly present in republican neighbourhoods as well. Queen’s University Professor Pete Shirlow argues that the explanation goes beyond any simple concept of “Protestant bigotry” and that the mentality towards outsiders runs much deeper and is much more complex than that.

There has also been a 20 per cent increase in homophobic hate crime in the last 12 months and an increase of 49 per cent over the last 24 months. While some of this can be explained by an increase in the actual reporting of crimes by a more confident gay community, the rest clearly fits the broader picture of increased bullying of minorities in Northern Ireland.

There were also 70 hate crimes carried out against people with disabilities in Northern Ireland last year, an increase of 100 per cent. The Leonard Cheshire Disability charity has subsequently launched a major campaign to raise awareness of hate crime against vulnerable people. Meanwhile, observers await new government interventions to counter hatred in Northern Ireland society.