David Whelan speaks to the Judge Desmond Marrinan, the man tasked with defining hate crime in Northern Ireland and reviewing the current law.

Proportionally, Northern Ireland now has a reported hate crime ratio in excess of England and Wales. Eight hate incidents are reported here every day. Undoubtedly, the problem is increasing as evidenced by the fact that racist hate crimes have outnumbered sectarian hate crimes over recent years.

Despite this, no specific offence of “hate crime” exists in Northern Ireland law. Instead, the Criminal Justice (NO. 2) (Northern Ireland) Order 2004, enables a sentence to be increased where it is proven that the basic offence for which a person is convicted was motivated against one of the currently protected characteristics, in the form of race, religion, sexual orientation or disability, or where the offender demonstrated hostility against one of these characteristics either at the time of committing the offence or immediately before or after it.

Last year, of the 16 cases brought before the Crown Court, alleging hate crime, only 13 proceeded. Of these, not one single defendant received an enhanced sentence above the expected penalty for the crime.

Describing the development of laws around hate crimes in Northern Ireland, and in other parts of the UK as “piecemeal”, Marrinan outlines how the law in England, Scotland and Wales underwent review – with different outcomes in some regards – to provide for increased penalties and the recording of a racially or religiously motivated hate crime on a person’s criminal record. 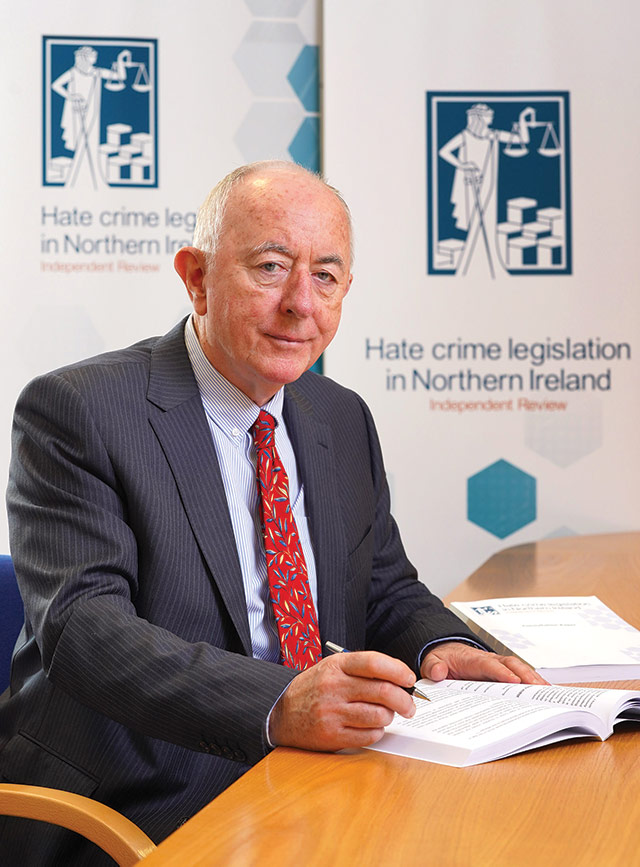 There can be no doubt that the current law is not working and our role is to establish how we can make it better.

Marrinan, a County Court judge until 2018, dealing mostly with the criminal trials in the Crown Court, has been tasked with leading an independent review of hate crime legislation in Northern Ireland, commissioned by the Department of Justice.

The review comes after a commitment within the draft Programme for Government to review hate crime legislation. A 2017 report on hate crime on behalf of the Chief Criminal Justice Inspector noted the disparity n the legislative approach to hate crime across the UK and recommended the Department review the existing legislative response to hate crime, including consideration of the statutory aggravated offences model already in existence in England and Wales.

In January, the Marrinan Review, supported by a secretariat and separate reference groups made up of core academic experts and key stakeholders, launched a public consultation which runs to 31 March 2020, after which a report will be submitted to the Justice Minister.

Marrinan is in no doubt that the current laws in Northern Ireland are not working in relation to hate crime. He continues to keep an open mind around the future shape that any changes to the law in Northern Ireland might take but admits his preference for the Scottish model, where hate crimes are stand alone and all encompassing, in comparison to England and Wales where race and religion are defined areas for enhanced sentencing provisions.

“There can be no doubt that the current law is not working and our role is to establish how we can make it better. We have an advantage in assessing the impact of reforms which have already been implemented in other parts of the UK.

“My view is that the Scottish model is the one that works best so far, although I would keep an open mind, and if we can build on that and reform our law to take the best bits of other laws then I think we would have a law which could be considered more effective in providing justice for victims and fairness for defendants.”

Marrinan does not agree with the assessment that the main anticipated outcome of any legal changes will be harsher punishments for offenders. “The intention of the review is to make the law more effective given the perceptions outlined by the Northern Ireland Human Rights Commission (NIHRC) and the Criminal Justice Inspectorate that our law is not working very well and that courts are not imposing greater sentences,” he says.

“The thrust of the review is not to ensure that people receive greater sentences – although that may well be a by-product of changes – it’s to see where the law is working and how it can be made to work better, either by reforming the current model or replacing the law.” 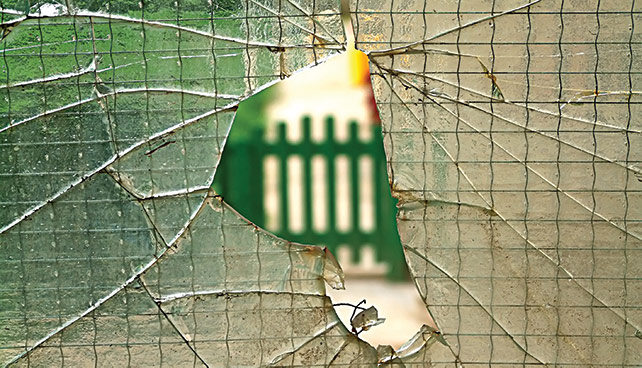 Marrinan says that through broad engagement, feedback has suggested that most victims of hate crime, especially of a low- and medium-level type, would prefer to see a form of restorative justice over the heavy hand of the law in the shape of the criminal courts.

“The absence of laws for adults in relation to restorative justice is a challenge but it’s one that is worth taking up. It highlights an understanding that crime cannot and should not always be dealt with by the criminal law. It can be dealt with and addressed through shifting society’s attitudes and education is a big part of that.”

Marrinan believes that strengthened law with regard to hate crime could circumvent some of the factors contributing to under-reporting. Research collected by the Review estimates that of those who make a complaint in relation to hate crime (80 per cent do not), only 4 per cent of cases which are deemed as crimes end up with a result that is satisfactory from the point of view of the victim.

The outcome for victims is a key consideration of the work done by the review to date. The judge is well aware of the limitations of legislation to achieve an uplift in reporting numbers, however, he believes that effective laws and evidence that race hate crimes are being dealt with seriously by the justice system will serve as an aid in tackling the underreporting of similar crimes.

The Review comes at a time when hate abuse, especially of an online nature, is prominent in the media. In December, a number of female MPs in Westminster announced their decision to not contest their seats given the increased levels of misogynistic abuse levelled at them in recent years. Female members of the Northern Ireland Assembly have reported similar hate speech.

Unquestionably, social media and the digital age has enabled greater levels of hate crime and abuse. The remit for the review, to consider whether existing hate crime legislation represents the most effective approach for the justice system to deal with criminal conduct motivated by hatred, malice, ill will or prejudice, includes hate crime and abuse online.

However, telecommunications legislation is a reserved matter and given the recent White Paper published by the UK Government on hate crime, Marrinan highlights the intention for the Review not to include consideration of any issues related to online hate crime that would duplicate the work ongoing in the UK.

“I think it is important for us to consider it in the review because people in Northern Ireland will have a view and they may seek to influence the British Government’s decision as to what actual laws are passed to cover hate speech online.”

The Review is also considering expanding the definition of hate crime, with a specific remit to look at gender. Currently, transgender is a protected characteristic in England, Scotland and Wales, however, gender is not protected in any of the UK countries. The potential to include other groups, such as homeless, has also been mooted.

“I take the view that no group should be protected unless there is good empirical evidence that they are being targeted for hate crime or hate speech. There is no doubt that a lot of women are being so targeted. The same thing might apply to age.

“However, it’s worth remembering that this is not simply about name calling or causing offence. There has to be a crime committed before you get the extra benefit of increased sentencing.

“I’ve come to no particular conclusion regarding each of these and I think the benefit of a consultative process is getting to understand the levels of hate crime that exists in relation to these groups. A group will be recommended for inclusion if there is good empirical evidence that they are in fact suffering because they are being specifically targeted.”

Marrinan has encouraged the public to have their say in the review, including at the various public outreach events planned before the consultation closes on 31 March.