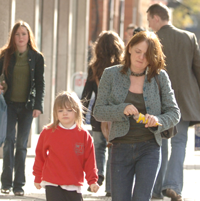 Peter Cheney considers what the 2011 census says about Northern Ireland’s society and the potential for its population and economic growth.

Northern Ireland’s highest recorded population (1,810,863) represents a steadily ageing society which is still almost the youngest in Europe and one that has been building its future in the countryside, while its regional capital almost stands still.

Significantly, one in five of the population has been born since 1996 and will therefore have no memory of the Troubles.  At the other end of the population scale, 10,231 citizens were aged 90 or over on census day (27 March 2011) and were therefore born before the formation of the state.

Initial census results were published in June but the figures released in September provide the first breakdown of population by age, sex and geography.
Northern Ireland remains one of the youngest regions in Europe with 21 per cent of the population aged under 15.  That young population, once properly skilled and educated, will be a significant magnet for investment and economic growth.

While the media’s focus has traditionally been on the numbers of Catholics and Protestants, the shares of children and older people, men and women, and urban and rural dwellers will have a much more significant impact on the future shape of Northern Ireland’s society, especially its public services and finances.

Overall, the population increased by 7 per cent between 2001 and 2011 with growth taking place across all districts.  However, growth in mainly rural districts far exceeded that in Belfast and its suburbs.  At 21 per cent, Dungannon had the largest population increase, followed by Banbridge (17 per cent), Ballymoney
(16 per cent), Craigavon (15 per cent), and Newry and Mourne and Cookstown (both 14 per cent).

Belfast and Castlereagh, by comparison, experienced only 1 per cent growth.  The census figure of 280,962 is a slight increase on 277,391 ten years ago.

Growing the city’s population, to 300,000 by 2021, is a major aim in the Regional Development Strategy, especially to increase its economic critical mass.

Titanic Quarter Chief Executive David Gavaghan has a more ambitious aim of doubling the city’s population (reaching around 560,000) to restore its status as a major economic competitor.  Belfast’s population peaked at 443,000 in 1951, after decades of growth during the Industrial Revolution, and it last stood at the 300,000 mark in 1987.

The regional trend for under 15s is a 5 per cent decline but this has to be viewed alongside a 10 per cent rise in the number of the youngest children (0-3s).  This trend is already reversing the demographic downturn in primary schools, a trend that will filter through to the post-primaries by 2018.

North Down has the oldest age profile with equal numbers of under 15s and over 65s (18 per cent each).  In the youngest district, Newry and Mourne, children (a 24 per cent share) outnumber older people by two-to-one, when the same age brackets are used.

Not surprisingly, the property boom increased the number of households in every district, but particularly in the countryside.  Dungannon’s 25 per cent rise is followed by 21 per cent in Banbridge and 20 per cent in Newry and Mourne.

At the same time, the general size of households became smaller with all districts having more one- or two-person households than in 2001.  This trend, coupled with the rise in rural dwellers, is likely to maintain high levels of car dependency and limit progress on cutting carbon emissions.

Ireland’s first household census was undertaken in 1841 and registered an all-island population of 6,528,799, which fell sharply to 5,111,557 ten years later, due to the famine.  Population decreases continued until the 1960s, when the baby boom and an increasingly healthy population started to drive up increases.

The province’s population may have reached around 2 million, had the Troubles not occurred.  Instead, emigration due to the conflict in early 1970s meant that population levels flat-lined.  The economic stagnation of that decade and the early 1980s also slowed down subsequent growth.

The Republic’s last census was undertaken on 10 April 2011 and returned a population of 4,581,269.  The South holds censuses every five years and this is the first time since 1991 that the whole island has shared the same census year. 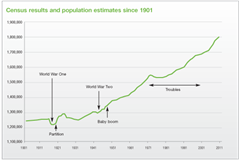 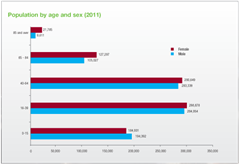