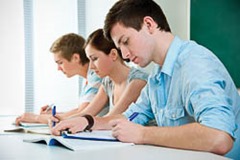 The Department of Education’s most recent headline results for state examinations cover 2013. The number of students who took their GCSE exams in that year was 176,301. This number had decreased by 16,059 exam entries since 2008. The 2013 entries had increased by 4,947 pupils on the previous year, which had a recent low of 171,354 exam entries.

The amount of pupils achieving top grades has risen. In 2013, those receiving A*-A grades made up 28 per cent of total GCSE exams taken. This number has risen slightly from 26.4 per cent pupils in 2008. Those in the A* grade category comprised 8.9 per cent. This number slightly decreased by 0.2 per cent on the previous year and has largely remained consistent since 2008. Most students (99.2 per cent) gained A*-E grades.

Students achieving grades A*-C made up 76.5 per cent of the results. Thus 23.5 per cent of pupils who sat their GCSE exams did not achieve A*-C grades; this figure has increased by 2 per cent over the past five years. Of the girls sitting the 2013 exams, 32.7 per cent achieved A*-A grades in comparison to 23 per cent of boys. There has been a slow increase in girls getting top grades since 2008 from 30.3 per cent, whilst the number of boys being awarded the grades has fluctuated slightly since 2008, reaching a high of 23.6 per cent in 2009.