Health Minister Robin Swann says that “support, understanding and patience” are necessary as he set out a roadmap for efforts to rebuild a crisis-hit health service.

Swann, a surprising holder of the health portfolio following the resumption of the Northern Ireland Executive in January, will be expected to defend the decisions taken by the health service in dealing with the Covid-19 outbreak and their lasting impact on a health service already in a state of crisis.

The Minister recently stated his disappointment at the leaking of a document which showed that he opted to relay information on the worst case scenario impact of Covid-19 to the public but did not disclose available modelling on the best case scenario. Northern Ireland’s Covid-19 related death toll of 802 (on 19 June), while significant, is substantially less than the potential worst-case scenario outlined by Swann, in March, of 14,000 people dying as a result of Covid-19

The Health Minister opted not to disclose to the public the best-case scenario highlighted to him by scientific modelling, which put the figure at 250 deaths.

Swann did outline the figure that had  been given to him by experts that 3,000 people could die in a reasonable worst-case scenario but asked the Executive to back his strategy to not disclose the lowest figure, which it has transpired was the closest to the current death toll, to avoid giving the public a false sense of security while lockdown was being implemented.

While it is recognised that actions taken by health services, including the pausing of some services, ultimately saved lives and reduced the potential spread of the virus, concerns remain as to what the overall cost of these measures will be when inevitable increased pressures are recognised.

“Despite the action I took to protect our highest priority services, a terrible consequence of the pandemic is that for some people conditions will have gone undetected or untreated longer than they otherwise would have. I am also deeply concerned about the impact of the pandemic and the lockdown on mental health, especially for our most vulnerable citizens,” the Health Minister says.

Swann is aware that increased pressures are imminent and that these pressures will be compounded in a system which was already failing.

“Our aim should not be to simply go back to the way things were,” he explains. “There were serious embedded problems in health and social care long before any of us had ever heard of coronavirus.

“Staff were under severe strain. Budgets were repeatedly squeezed. Waiting lists were dire. Emergency departments were seriously over-stretched. Our social care system was described as collapsing in slow motion.”

Acknowledging that decisions taken by the health service will also be a key element of future demand, he states: “The Health and Social Care system has had its own lockdown, services were scaled back substantially to keep people safe and to focus resources on caring for those with Covid-19.

“As we emerge from the first wave of the pandemic, it is no easy task to build services back up to pre-existing levels.”

In early June, Swann published a strategic framework titled ‘Rebuilding Health and Social Care Services’ which paints a bleak picture of the challenges facing health and social care in Northern Ireland in the wake of the first wave of Covid-19, describing the impact as “profound” and “long-lasting”.

On top of existing challenges and built up demand, Northern Ireland’s health and social care service will not be able to return to its previous state.

“The virus remains a very real threat. Normal business will not be possible while that remains. Keeping the public and staff safe is an absolute priority. That means enforcing social distancing and separating Covid and non-Covid care as much as possible,” the Minister explains.

“There are other serious pressures too. Long-term demand for PPE across health and social care and wider society will be substantial. The Department’s budgetary position continues to be hugely challenging. And we will also have to retain additional capacity in the health system in anticipation of a potential second Covid-19 wave,” he adds.

Included in the framework are plans by all Northern Ireland’s HSC Trusts for scaling up services in the immediate period, including emphasis on high priority cancer services and other urgent conditions. The plans state that Trusts have prioritised inpatient, urgent and red flag investigations across all sites, as well as increasing scheduled routine activity for daycase and diagnostics (with reduced capacity due to infection restrictions).

Measures introduced to tackle the pandemic are expected to create a backlog of demand in Northern Ireland’s already constantly increasing hospital waiting lists. Prior to the virus outbreak, Minister Swann labelled waiting list figures as “appalling” and the health service are already recognising the likely impact of the move to curtail elective and diagnostic services during the early stages of the pandemic outbreak.

“Emerging research indicates that population health is highly likely to be negatively affected by the wider impacts of Covid-19, with the greatest effects felt by the most disadvantaged.”

The impact will not only relate to pent up demand in waiting lists in secondary care. Primary care and community care have also been widely affected with many areas registering large decreases in demand for services, which could ultimately lead to a significant number of health issues not being identified.

Similarly, community teams often utilised in the management of long-term conditions, rehabilitation and recovery have been severely disrupted. These impacts stretch right across the age spectrum ranging from elderly patients having long-term conditions managed to allow them to live at home to a reduction in health assessments for children, meaning issues may not have been identified early.

Mental health is another area where an initial decline in service demand was recognised, figures now suggest that this has reverted to an increase. The framework outlines anecdotal evidence from clinicians that indicate “an increase in acuity of those presenting with severe mental health problems, and a larger number of new presentations, previously unknown to mental health services”.

Problems in social care are long-standing and the recognised need for radical reform of adult social care will undoubtedly be hampered by the significant concentration of Covid-19 within care homes. At the same time the provision of domiciliary care has been impeded and additional services such as day centres and respite services have generally come to a halt.

The Strategic Framework echoes the Minister’s assessment that the introduction of lockdown regulations was essential in controlling the spread of Covid-19 but recognises the wider impacts on population health.

“Emerging research indicates that population health is highly likely to be negatively affected by the wider impacts of Covid-19, with the greatest effects felt by the most disadvantaged,” it states.

Adding: “It is therefore likely that any growth in life expectancy will stall and perhaps even flatten in the wake of Covid-19. In terms of the social determinants of health, there are likely to be negative impacts on poverty, employment, economic security, and potentially educational attainment.”

All of these issues must be tackled in the context that the Department of Health has received no additional funding in its 2020/21 Budget in relation to delivering on the priorities set out in the New Decade, New Approach deal.

Minister Swann has reiterated that the ability of the Department to deliver on these ambitions will continue to be constrained in the absence of additional funding. A major critic of Stormont’s handling of the health service over the past decade, the Minister recently told an Ad Hoc Committee at Stormont that: “Running health and social care on close to empty for 10 years robbed it of capacity, resilience and flexibility.”

However, there is also some positive outlook within the road map. For example, the ambition to integrate elements of the health transformation programme which were well-advanced into a new way of working. Service innovation in the form of Covid-19 centres to reduce infection risk, effective telephone triage and video consultations, especially in primary care, and technology utilisation in social care have all been flagged ad potential areas to be built upon and expanded.

The Health Minister has repeatedly stressed his pride at those involved in the health and social care sector in their response to the HSC’s “biggest challenge since its inception”.

“I have seen so many examples of excellence, innovation and commitment as our health and social care staff rose to the challenges created by Covid-19. Decisions were taken at pace, services were re-configured, mountains were moved. Staff have worked across traditional boundaries time and time again,” he says.

“I cannot thank them enough. We must build on that spirit in the months and years ahead. Innovations like telephone triage and video consultations will be embedded in primary and secondary care.”

He added: “I don’t want to simply restore the health and social system to the way it was at the beginning of 2020. That would do a disservice to our great staff and the people of Northern Ireland.

“I honestly believe we can make it better. That will require patience, careful planning, sustained investment and collective support, not just around the Executive table but across society as a whole.”

The New Decade, New Approach deal set out a range of priorities for improvements in the heath service, however, many of these are now set to be delayed as a result of measures introduced to tackle Covid-19. The Department have released a risk rating of the anticipated delay of those priorities 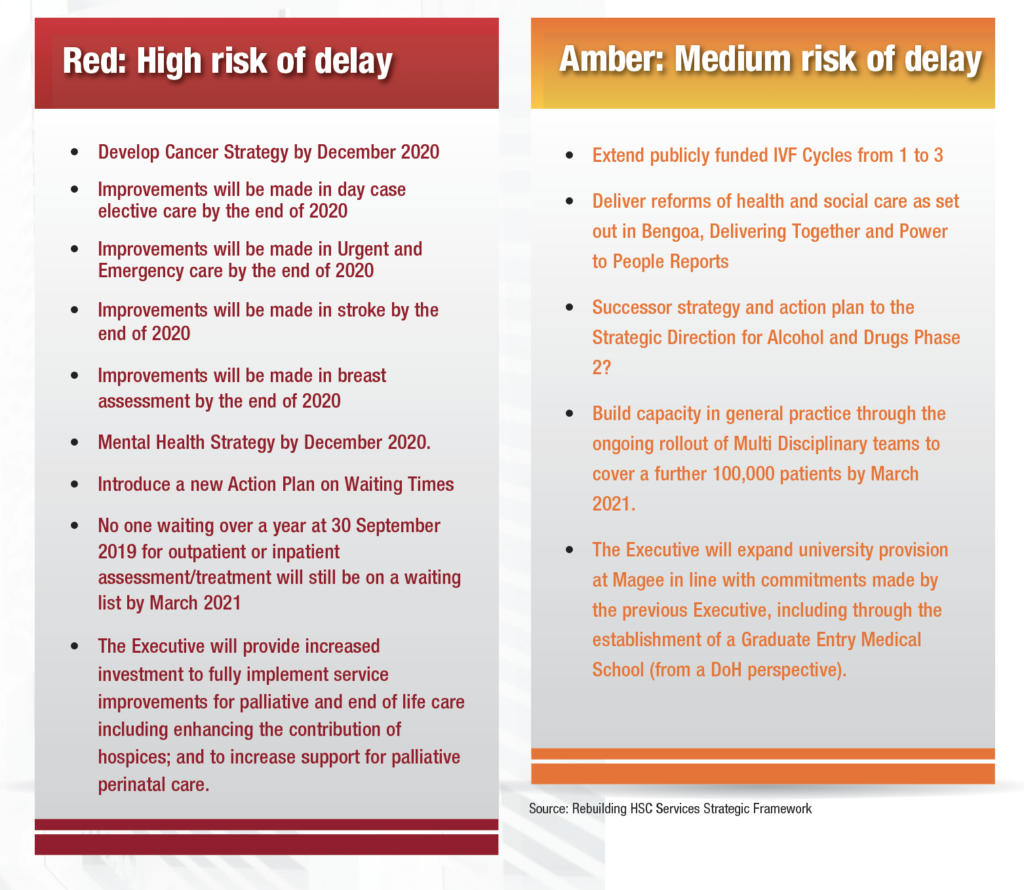