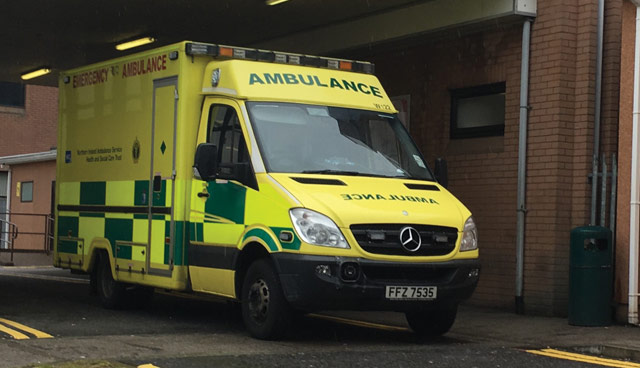 Described as the most radical development in ambulance provision in 20 years, David Whelan meets with Director of Operations at the Northern Ireland Ambulance Service (NIAS) Health and Social Care Trust, Brian McNeill, to discuss the proposed Clinical Response Model (CRM).

Setting the context in which transformation of the Trust’s current response model is long overdue, McNeill highlights that the Government standard to reach 72.5 per cent of ‘potentially immediately life threatening’ (category A)’ cases in eight minutes or less was last met in 2011. Current performance, he states, is around 50 per cent and unsustainable going forward.

The statistics are the basis of a planned overhaul of operations within the ambulance service, outlined in a consultation which closed in December 2018. Pressures on the current system are so high that the Clinical Response Model is being progressed by the Trust, even in the absence of a Northern Ireland Assembly, with the expectation that once completed, spending for the final model’s implementation will get either political or official level sign off.

McNeill explains that growing pressure due to factors such as an older population, more comprehensive and effective evidence-bases, and improved medical technology were identifiable as far back as 2012. “At this stage we were required to look at our own internal efficiencies and performance improvement. In exhausting all avenues in this process there was recognition that radical change was required.”

An NIAS demand forecast exercise predicts an emergency demand increase by 3.1 per cent over the next five years. “We believe it is now timely, necessary and appropriate to consult on introducing changes to how we direct our capacity in the most clinically appropriate way to best meet the needs of the patients we serve,” says McNeill.

To meet the growing demand the NIAS assessed that it would also need an uplift in resources. However, as McNeill explains, clinical evidence highlighted the need for a change of model, rather than simply making the case for resources based on a target that was no longer viable.

He states: “Targets to respond to those calls designated as absolute emergencies within eight minutes were originally introduced in 1974 and were based on the best outcomes for people in cardiac arrest. While this target time remains appropriate for the nature of a cardiac arrest emergency today, it is inefficient as the target for all emergency calls. We believe that by adopting a new categorisation system for calls, based on the tested system operating in NHS England, we can reduce the number of calls classified as category A from 30 per cent down to 7 per cent.”

While time-based ambulance response standards have been recognised as effective in driving improvements and maintaining response times to the most critical and injured patients, there is a lack of evidence that they lead to good clinical care.

Offering context to how significant a 30 per cent to 7 per cent drop in cases categorised as category A would be in alleviating pressures on the system, McNeill highlights that under the current model, of the 220,000 emergency calls the NIAS receives annually, over 60,000 are classified as the greatest priority.

“The current NIAS operating model results in the rapid dispatch of multiple resources to a large number of patients whose clinical condition may not warrant that level of response,” he explains. “Also, the current model puts disproportionate focus on reaching patients quickly rather than sending the most appropriate resource for the patient’s needs or measuring the quality of care given by ambulance personnel.”

The Director of Operations outlines that proposals for the new Clinical Response Model will be part of a wider framework of ongoing efficiency reforms including a review of systems process and structure within the emergency ambulance control, ongoing implementation of appropriate care pathways and a community resuscitation and defibrillator strategy across Northern Ireland.

Outlining a new reconfiguration of call categorisation, McNeill explains that a reduction from five to four key groups, more acutely identifying the patients at greatest risk could potentially improve activation time by 33 seconds and improve the cardiac arrest survival rate in Northern Ireland by some 13 per cent.

Identifying the sickest quickest is a key facet of the proposed CRM and McNeill outlines that the new categorisation of emergencies will be underpinned by an enhanced call taking process based on the Pre-Triage Sieve (PTS) and Nature of Call (NOC).

“When receiving 999 calls, ambulance control staff will utilise these processes prior to opening the full triage software (AMPDS) to identify at the earliest opportunity those patients with an immediately life-threatening condition. The next step is to ensure that we get to these emergencies as quickly as possible. By more efficient prioritisation of the most at risk patients we can activate our ambulance resources quicker and realise significant benefits for patients. It’s estimated that for each one minute reduction in response time, cardiac arrest survival increases by 24 per cent.”

Efficiently responding to the new categorisation of emergencies also facilitates enhanced resource allocation and a reduction in the category A cohort will ultimately lead to freeing up resources to respond more appropriately to other categories.

McNeill explains that added “versatility” of resources should lead to better outcomes. Using the example of a stroke patient who would need rapid transport to hospital rather than a paramedic ambulance he says, “previously we were sending one or maybe multiple resources to an emergency on the basis that they were closest or available, however, in some instances they were the wrong skillset for what was required. That system is inefficient”.

He outlines three categories for clinical care, which highlight an ongoing move away from unnecessary hospital attendance for patients across the health service. These include:

Hear and treat: Already piloted, the use of a clinical support desk to support patient care without sending an ambulance is currently in operation for 16 hours a day but additional resources would see it moved to a 24/7 service.

See and convey: Patient safety remains a priority for staff and they will continue to transport those in need to emergency departments.

To ensure that the new model is efficiently improving patient requirements and demand, the NIAS are proposing the introduction of Ambulance Quality Indicators (AQIs), focussing on whether the clinical quality of the care it give is appropriate and effective for the patient.

McNeill says: “A key change will be reporting on a mean response time of eight minutes, representative of all ambulance responses. And we plan to introduce a 90th centile (9 out of 10) in 15 minutes.” This he hopes, will be more readily understood by the public than the previous model. “We feel that these new indicators will be more easily understood and will provide a much improved and more equitable service for the population of Northern Ireland.”

Turning to the resources needed to deliver on the CRM, McNeill explains that as of August 2017, the gap between current capacity and demand was identified as 333 full-time equivalents, although he admits that that figure may now be outdated. He believes that the evidence base needed to construct the CRM has clearly defined the current capacity gap and is optimistic that funding will be made available to implement the model once completed.

Growth in the number of frontline staff should act as a catalyst for growth of fleet, improvement of estate capacity and additional equipment. McNeill highlights that such a move would not only improve the operations of the ambulance service but will have ramifications across all of the acute trusts, inevitably helping to drive down pressures on emergency departments.

Increasing pressures across the health service has seen a recognisable fall in staff morale. McNeill believes that the new model will go some way to facilitating work already underway to address staff health and wellbeing.

“I think we have been asking a lot from our staff over the last few years and they have given us more than should have been asked of them. Currently we have difficulty getting them stood down for breaks, getting them finished on time and we are dependent on them working overtime. Hopefully, the CRM will facilitate us realigning the service into the organisational norm and significantly reduce pressure on staff, not just at on the frontline but on the service as a whole.”

In conclusion, McNeill says: “Our short-term ambition is to get the necessary support for the proposed improvements. We envisage full implementation of the process to take up to five years but it’s worth noting that as soon as we can start to bring extra staff out of education then the public should recognise improvements in the service. This will be a continuous process. As a result of implementation we would like to see a safer, more efficient service that meets all patient needs and that will enable our staff to continue to deliver the high quality of service, but under less pressure than the current circumstances.”