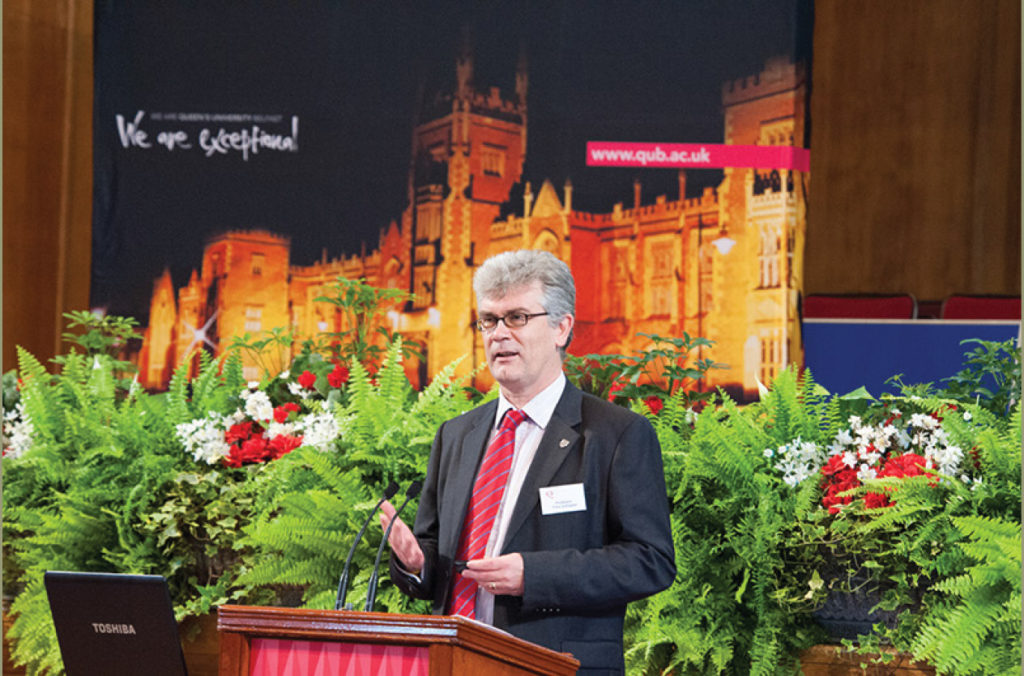 Attempts to ascribe purpose to education have the consequence of stimulating discourse with enough momentum to continue in perpetuity. In recent years, there has been much emphasis on its function as an economic driver. The reality is that education is not about one thing; it is about many things simultaneously. “It is, in part, about increasing human capital in society which helps to attract FDI and encourages economic growth, but it is also about giving individuals the qualifications, attributes and experiences that will allow them to live fulfilled lives as citizens, thereby increasing the cultural and intellectual qualities of society,” Gallagher unpacks.

At the same time, in a deeply divided society in a post-violence phase, the former Pro-Vice Chancellor asserts that education should also be about preparing young people to live and work in that society, contributing to the process of securing peace. Failure to recognise and emphasise this purpose, he argues, represents an inherent shortcoming of the Northern Ireland education system’s leadership as a whole.

On this plain, Gallagher believes that young people deserve greater exposure to alternative perspectives through education, “partly because the commitment of the education system as a whole to doing exactly that is more rhetorical than real”. While many schools and teachers attempt to address this problem in a creative manner, the reality is that they are almost solely judged and inspected on the basis of academic qualifications. “Now, if contributing to social cohesion is the central purpose for education in Northern Ireland, which I think it should explicitly be, then the schools should be recognised and rewarded for doing that.”

Should teachers, therefore, act as agents of change? Gallagher contends that this responsibility should not be left to educators to bear as a burden alone. “Very often teachers are reluctant to be pushed to the fore like that. Education is a hugely important social institution because it’s part of the way we prepare young people to become citizens. As such, education and educators should play that role, but they should be supported in doing so, both by the Government and the wider system.”

However, he also rejects the notion that education is some form of conveyor belt upon which children are assembled to slot into a particular role within society. “Life is much more interesting than that and as such education should be likewise. That is the way in which you engage people’s attention, enthusiasm and commitment.”

While Gallagher acknowledges that education has its inherent limitations, he maintains that a narrow perception of its function does little to facilitate its potential.

“While kids don’t go in as blank canvasses, they should have a set of experiences that enable them to come to their own reasoned judgements. Much of the Curriculum is designed towards that end, but it also requires the support of those who lead the education system to ensure that those qualities are recognised and emphasised within the system.

“Very often, when considering the education debates in Northern Ireland, you would get the impression that the only objective of education is to squeeze as many GCSEs out of young people as possible. This is an impoverished view of what education should be about.”

Due to the achievement of top-performing students, it is common misconception for Northern Ireland’s education system to be framed as ‘the best’. “This is a myth and it has always been a myth. OECD figures indicate that we have one of the most unequal patterns of outcome. When you have 20 per cent or more of young people who are leaving school without what is deemed to be the minimum level of qualifications required to facilitate choice then there is something fundamentally wrong with the system,” Gallagher explains.

“One of our challenges here, if you study the working-age population, is that we have the lowest level of skills within the regions of the UK. That makes it very difficult to grow the economy, attract inward investment or even support local companies that want to grow. So, enhancing the skill sets of the population is very important and education has a key role within that.”

“If contributing to social cohesion is the central purpose for education in Northern Ireland, which I think it should explicitly be, then the schools should be recognised and rewarded for doing that.”

Often when considering achievement gaps, it is that between religious affiliations which is considered most politically important. Less attention is afforded to gender achievement gaps or the most substantial gaps which relate to social background.

“In nearly every education system, at some level, there is a relationship between social background and educational outcome,” Gallagher observes. “In our system, it’s particularly marked, partly because of the structures that we have. It’s a huge issue which represents a key aspect of the whole problem of underachievement within our system, because the young people who tend to have the worst educational experience are the same young people who come from socially disadvantaged backgrounds.

“I think that the education system should be breaking its back to try and address those problems, pouring resources, energy and commitment into meeting those challenges. 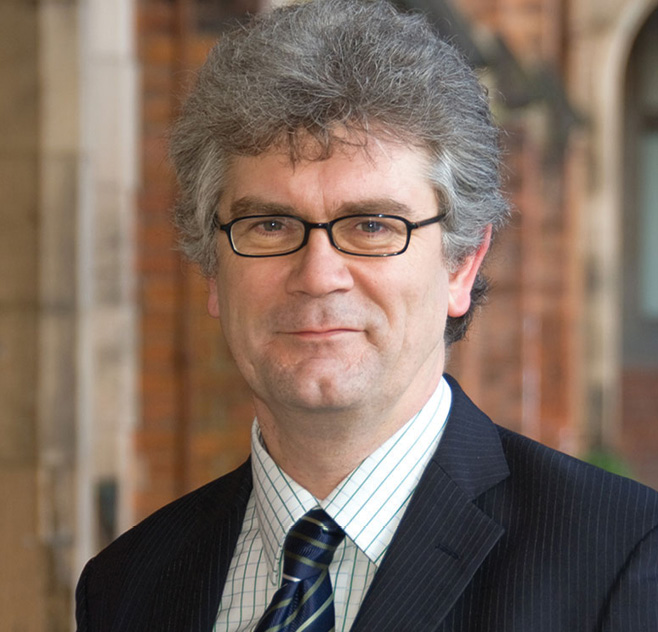 Acknowledging that these significant levels of inequality have existed for some time without any meaningful alleviation, Gallagher maintains that we must strive towards radical improvement. “We know from other places that it is possible to have an education system which achieves excellence alongside a very high level of equality. One where everyone can gain something from education and there are safety nets in place for a small number who do not make tangible gains from their time in compulsory education. If we could achieve that, then everything lifts to another level.

“We need to be much more ambitious. It’s not about how many kids get ‘five good GCSEs’ – although it’s a scandal that so many don’t – it’s about how many young people get good jobs and live lives as fulfilled citizens. An outcomes based approach to policy would set that as the key outcome for education.”

While it is true to say that in some areas, the Curriculum has failed to achieve its full potential, the QUB academic insists: “Before looking at another revision of the Curriculum, what we must do is examine what has happened, observe the choices young people are making and determine if inequalities which previously existed have crept back in. Once this information is obtained, it is then possible to determine whether or not the trends that are occurring are in line with those that we as a society think ought to be happening.

“I think it is now time that we begin to identify some emergency interventions to try and address some of those issues, rather than assuming that if we do something at a strategic level for everyone, that somehow or other the system will fix itself, because clearly it won’t.”

“We need to be much more ambitious. It’s not about how many kids get ‘five good GCSEs’ – although it’s a scandal that so many don’t – it’s about how many young people get good jobs and live lives as fulfilled citizens.”

Gallagher contends that an ambitious 10-year target should be set, beyond which point no young person should leave school without defined minimum-level of qualifications. “We must do something to close that gap once and for all. There are systemic issues here and it’s not just the responsibility of schools or teachers. It’s also the responsibility of the Education Authority, the Department and our political leaders. They all must be held to account in order to make this turn around as quickly as possible. That is something discernible that could be achieved, even if the big strategic things cannot be agreed upon surely we can agree on that.”

Gallagher critically reflects on education policy in recent decades which he states has been “a sorry sight for a considerable length of time”. Most decisions have faced substantial delay because they have been controversial. For instance, academic selection has been debated for almost 20 years without sign of resolution. Likewise, when the Educational Authority was finally established, it was stripped of many of its intended powers and responsibilities.

“We have a system which tends to be very top-down in the way that it operates, giving very few opportunities to parents, teachers or communities in local areas to have a genuine input in shaping education. We spend too much time arguing over things rather than trying to identify specific things that ought to be done right now and getting on and doing them.

“There has been a huge political vacuum and I think that there is a huge onus on politicians to do something about it. Children are the one issue on which our shared system of government in Northern Ireland should have developed a common goal.”

Similarly, the ongoing process of area planning, which is about rationalising the system, has been a top-down process. “I think it is motivated by a perception that small schools are somehow or other educationally deficient, while I cannot see any evidence to support that claim. There is no relationship at all between school size and educational outcome. Likewise, small schools are often crucial to maintaining the vibrancy of local rural communities.

“It is another example of big process of change which appears to be very directed, prescriptive and operating to a common template, not really taking account of local circumstances or giving people within these an opportunity to have their say. Closing lots of schools and not saving any money? There’s something badly wrong there.”

Tony Gallagher has been with Queen’s University Belfast for almost 25 years, serving as Head of the School of Education for five years and as Pro-Vice Chancellor for five years before returning to the recently merged School of Social Science, Education and Social Work, where he is currently the Director of Research. His main research interest is in the role of education within divided societies. For the last decade, Gallagher has largely focused on shared education and school collaboration across Northern Ireland but also in Israel/Palestine and Los Angeles. When not kept busy by his academic role, he likes to cycle and has recently joined the Titanic Quarter Cycling Club. 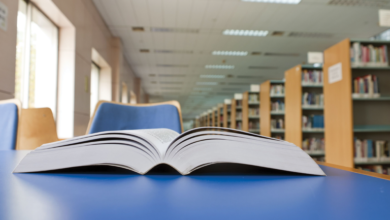