The Department of Education’s (DE) Children and Young People’s Strategy 2017-2027 appears to be a partial victim of the political paralysis affecting Northern Ireland, the publication of the response to the plan’s public consultation process in March 2018 and an easy read version from September 2018 were the last official documents published by the strategy team.

Released for public consultation in December 2016, just one month before the Assembly and Executive collapsed, the Children and Young People’s Strategy public consultation period was concluded at the end of March 2017. The Children and Young People’s Strategic Partnership (CYPSP) said that DE received 184 written responses, as well as 76 responses received via online questionnaire. An analysis report of the answers received, compiled by CYPSP, statisticians from the DE and the Centre for Effective Services, was released in March 2018.

The strategy’s implementation and delivery of actions outlined and “new structures for cooperation” were due to follow the consultation process, but these actions appear to be frozen without ministerial direction.

The strategy was a 10-year plan, following on from the Children and Young People’s Strategy 2006-2016, that had the following stated desired outcomes for children and young people:

• to be physically and mentally healthy;

• to enjoy play and leisure;

• to learn and achieve;

• to live in safety and stability;

• to experience economic and environmental well-being;

• to make a positive contribution to society;

• to live in a society which respects their rights; and

• to live in a society in which equality of opportunity and good relations are promoted.

Since the publication of the strategy, youth physical health, play and leisure have suffered a setback with a tightening of the DE’s budget meaning the cessation of funding for the Curriculum Sports Programme, a programme that provided over 36,000 school children with coaching from the Irish Football Association and the Gaelic Athletic Association. In terms of mental health, Northern Ireland’s funding for mental health services have experienced reductions in real terms every year since 2016 according to the Commission on Acute Adult Psychiatric Care. £30 million, from £333 million given to Northern Ireland as part of the DUP’s confidence and supply agreement with the Conservative Party, was pledged to “mental health and severe deprivation” in the 2019/20 Northern Ireland Budget.

Prospects of environmental and economic well-being also make for negative reading, with levels of carbon intensity having risen in recent years and Northern Ireland’s GDP growth rate and ease-of-doing-business rank having fallen. Further falls are predicted at varying levels dependent on what method is used by the UK to exit the EU. Given that the absence of the Assembly is in part due to disagreements over language rights, the strategy was setting goals that would appear modest in any other context, but seem lofty given Northern Ireland’s low starting point.

The methods by which the strategy planned to achieve its goals included:

• a reduction in the percentage of children between P1 and Year 8 who are obese and the proportion of children born at low weights;

• a reduction in the percentage of children and young people with a General Health Questionnaire score equal to or greater than four, signifying poor mental health;

• an increase in the “enjoyment experienced by children and young people as they play in their homes, their communities, their schools and their local play facilities”;

• reductions in the percentage of children living in absolute poverty before housing costs and the number of 16-24-year olds not in education, employment or training;

• increases in the frequency of participation by children and young people in voluntary and community work; 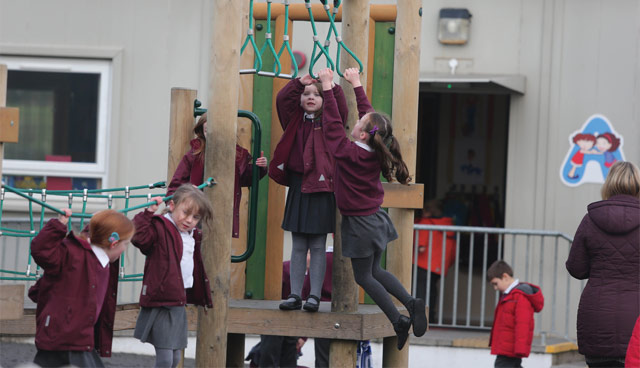 The analysis of the responses found that respondents wanted equal attention and funding to go to physical and mental health, for the strategy to take into consideration that where a child grows up affects its mental health and for different ways to measure the mental health of those under 16. In terms of play and leisure, respondents emphasised the need for any strategy to be cognisant of UN General Comment 17, which says that government, companies, and anyone working with children and young people must be aware that it is a fundamental right of children to rest, relax, play, and enjoy fun activities, culture and the arts.

Education responses called for the strategy to consider more than how many GCSEs a young person can gain and how their economic background can impact their academic performance. For homelessness, it was asked that the strategy count those under 16 who are homeless, as opposed to the 16 and 17-year-olds originally planned, to count homeless families too and to consider including a measurement about family breakdown.

More action on environmental well being was a common request among respondents, along with those stressing the need to consider the rise in families experiencing in-work poverty. It was also recommended that the Executive create a separate rights strategy to work with rights organisations to ensure that children, young people, and everyone else all have knowledge of and access to their rights.

A representative for the Children and Young People’s Strategy Team at the DE told agendaNi that the team is continuing work on the development of the strategy and studying implementation options in the absence of the Executive.

The draft strategy was developed following the implementation of the Children’s Services Co-operation Act 2015, which aims to improve co-operation among agencies and departments tasked with the care of children and young people. The Act requires an Executive to set the strategic direction of improving the well-being of children and young people in Northern Ireland, with an interim guidance issued in November 2018. The spokesperson told agendaNi that no final decision could be taken on the implementation of the strategy without the restoration of the Executive.