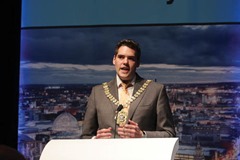 Former Lord Mayor of Belfast Alderman Gavin Robinson opened the Belfast: Future City conference and set out his own hopes for a united and prosperous city.

“What shall we give in return for so much?” is the English translation of Belfast’s motto and it sets the tone for Gavin Robinson’s vision for his home city.

Having recently completed his year as Lord Mayor, and now Chair of the Strategic Policy and Resources Committee, who have overall responsibility for the Investment Programme, Robinson is a champion for Belfast but his deep pride in the city comes from growing up there. Belfast is the “economic driver” for Northern Ireland, acting as its “tourist gateway” and hosting two-thirds of the province’s large companies and half of its foreign investment. The 70,000 students in the city offer great hope for the future of the region.

“Today’s event gives us the opportunity to take stock and see what all that opportunity could mean for this city of ours.” he remarked.

“Our city is greater than the sum of its parts,” Robinson added. During his year in office, he regularly highlighted “not only the need, but the absolute desire of the council to build relations and to boost connections within the city.”

In the digital economy, Belfast is the second largest recipient of the UK Government’s Super-connected Cities fund which has secured £13.7 million to improve the city’s infrastructure e.g. city centre Wi-Fi coverage and 100 per cent broadband accessibility.

Belfast is also one of only three Smarter Cities in the UK, having received that status in November from IBM. This has opened up the opportunity to use the “vast experience” of a global company and listen to its advice for improving the city’s performance. Crime rates in some Brazilian cities fell by 25 per cent after implementing the Smarter Cities programme.

The University of Ulster relocation is the greatest regeneration opportunity for the city in several years and represents a £250 million investment.

The development will bring another 18,000 students into the city.

Belfast City Council is also looking forward to the completion of local government reform, which will transfer planning and regeneration powers from central government. The council has “a heart for our city” but would be unable to achieve its aims without partnerships with other organisations.

“If today will do anything,” the Lord Mayor said, “I hope it will energise people within this city to realise that there is so much future potential for future growth.”

Robinson recalled how former US Economic Envoy, Declan Kelly, wanted city leaders to “stretch our ambitions and raise our goals.” A delegation of mayors visiting Belfast just before the conference were struck by the phrase “let ambition fire thy mind” on one of its murals.

Concluding, the former Lord Mayor said that many civic leaders will say how great the city was 100 years ago but “today has to be about defining what the next hundred years will be for this city and putting in the very best that we can for the city of Belfast.”