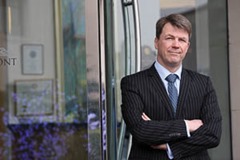 South Eastern Health and Social Care Trust Chief Executive Hugh McCaughey supports the principles of Transforming Your Care but has outlined the need for a much deeper reform programme, focusing on prevention and better management of chronic conditions.

Fundamental and radical change, in Hugh McCaughey’s view, is essential to sustain the Health Service and properly meet the needs of an ageing population. The Chief Executive of the South Eastern Health and Social Care Trust has concluded that the decisions made in the next five years will determine the future of the service.

While supportive of the principles of Transforming Your Care, he thinks that it may not be radical enough to bring about that change. “If we don’t reform,” McCaughey states, “what we’re going to end up doing is building more and more pressure on the current system and the people that work in it.”

He’s adamant that significant progress has being made over the last decade:

• mental health services are mainly provided in the community;

• the number of cardiac arrests has halved over the last decade;

• people with learning disabilities are living longer; and

To take one example in stroke services, a relatively young patient was discharged from hospital after less than three days of treatment, including thrombolysis. He would previously have been left with a long-term disability.

However, the strain is still building on the system. “We all hear the issues around an ageing population but I think we under-estimate the impact that it’s actually having,” McCaughey comments.

Analysis by the Health and Social Care Board indicates that the Health Service will need an extra £641 million “to stand still” over the next Comprehensive Spending Review period (broadly covering the next Parliament). Inflation accounts for £190 million of that figure and another £100 million will arise from new treatments and drugs. The majority of the extra costs (£347 million) will come from growth in demand, mainly associated with ageing.

One of his criticisms of TYC is that success “has almost become about whether we shift work from one location to the other.” However, McCaughey defines real success as “doing better as people age and helping them to age better.” This matches up with the World Health Organization’s ambition that health services should help people to experience two more years of healthy life.

In terms of economics, growth in health spending in OECD countries was 5-6 per cent per year before the economic crash but fell to just 0-1 per cent in 2010. The Executive’s Budget for 2011-2015 allowed for 1.5-2.7 per cent annual growth in health and social care spending.

McCaughey explains: “What we’re trying to do is struggle with one or two or three per cent against the demand that’s running at six per cent and that just builds more pressure on the system and will continue to do so.”

The issue of funding health according to the level of demand is also a societal one, he adds. If society wants to restore the growth in health spending to 5-6 per cent, that decision will have clear consequences for the size of other budgets e.g. policing and roads. 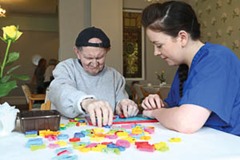 The paradigm shift he is calling for would see the Health Service’s focus moving from providing acute care to helping people to stay well and age better, reducing demand on services, and ensuring high quality services when people need to use them.

At present, a patient typically develops symptoms, visits their GP, receives tests, is prescribed with a treatment or medication, and is referred to secondary care if their condition worsens. The Health Service does not know about their condition between those stages in the system.

McCaughey sees great potential in using technology “so that we could change this from a reactive and episodic system to one where we actually monitor people and keep the focus on keeping people well.”

He highlights a contact lens being piloted in the USA which reads a person’s blood sugar level and sends the results back to a monitoring device. “In theory, you could every diabetic in Northern Ireland with that contact lens, being monitored in real time at a central point,” McCaughey comments. “We could intervene before people deteriorate.”

Most of the Health Service’s attention is on the 20 per cent of patients with serious conditions. The service, in his opinion, needs to get better at pro-actively managing the other 80 per cent who have mild or minor conditions and preventing their deterioration.

This could also mean turning smaller hospitals into centres of excellence for managing age-related and chronic conditions – as happens in the Basque Country. Under that model, fortnightly meetings between clinicians and GPs are used to case manage patients with a view to reducing hospital admissions. The patient population is also stratified according to the number of their chronic conditions, thus helping to plan the most appropriate care for different groups of patients.

Acute hospitals, McCaughey explains, are not the ideal place to treat an older person who has three or four conditions: “As an 85-year old, you don’t want to have four doctors looking after you. You want to have one … someone managing your whole care at a secondary level along with your GP.”

In conclusion, he restates that demand is rising and acknowledges that 5-6 per cent growth is “not likely to happen.” This reiterates the need for radical change in how the system operates.