The Local Government Auditor’s Report demonstrated that councils spent a total of £878 million on services, in what represents a spending increase of £20 million from the previous year. This amounted to an average spend of £450 per person, with Belfast City Council representing the highest spend per person at £654 and Ards and North Down Council representing the lowest spend at £360 per person. Also outlined in the report was a noted increase in absences and the employment of agency staff.

The requirement of councillors to review and retain funding reserves has been highlighted as being of critical importance in the report. Despite a demonstrable focus on streamlining efficiency and funding, the report has reflected an exponential rise in absences and the employment of agency staff. Staffing costs represented 41 per cent of operating expenditure in councils, amounting to over £344 million. Indeed, whilst the average cost of a member of staff fell by 2.42 per cent across the year, the average sickness absence rate saw a significant rise of 7.3 per cent, representing 6.7 per cent of working days lost through sickness absence across all councils.

Belfast City Council recorded the lowest absence rate at 12.4 days per employee, whilst Mid and East Antrim Borough Council recorded the highest at 18.3 days per employee. Increases in sickness absence levels were observed across eight of the 11 councils. Such cases were largely attributed to a rise in long-term absences triggered by conditions such as severe depression, stress, fatigue and musculoskeletal problems. In response to these figures, Pamela McCreedy has reaffirmed the importance of monitoring and actively managing absences, “both to ensure that staff welfare is protected, and that the delivery of frontline services is not affected”.

2017’s report noted that significant expenditure continued to be incurred on the engagement of agency staff, with then Auditor Louise Mason recommending that councils ensure that they receive “value for money” and that such employment was the “best means of providing the relevant services”. In the same report, Mason predicted that amounts spent on agency staff would decrease, “particularly as a percentage of total staff costs, as new councils stabilise”. However, the findings of 2018’s report contradicted Mason’s expectations, with council expenditure on agency staff increasing by 19.1 per cent to £24.3 million in 2016-17, with nine of the 11 councils increasing their spending on agency staff.

The majority of this recorded increase in expenditure was attributed to Causeway Coast and Glens, Belfast and Mid and East Antrim councils, with Causeway Coast and Glens council allocating 23.1 per cent of their staffing expenditure to agency staff. Such increases in the use of agency staff has been explained as a consequence of the immense organisational change still being faced by councils across Northern Ireland. McCreedy has pledged to keep the issue of agency staff under review, and, if appropriate, to investigate the issue “in greater detail”.

Continued uncertainty around Brexit compelled McCreedy’s predecessor, Louise Mason, to recommend that councils monitor and build up their General Fund balance to ensure that they could meet the risks associated with Brexit – a recommendation that has been repeated in this year’s report. The risks, highlighted by McCreedy as “difficult to predict” and as posing “severe financial challenges” have led to councils elsewhere in the UK turning to reserve funds “simply to balance the books”, according to the Auditor.

Council-led efforts to assess and mitigate the impact of Brexit upon Northern Ireland have been highlighted in the report as a key priority going forward. As “the part of the UK most distinctly affected by Brexit”, issues of cross-border trade, funding of council programmes and the movement of people across the border have been outlined as key factors which require local government preparation and the potential allocation of funding. On an organisational level, a number of councils were demonstrated to be addressing these risks in their 2016-17 Governance Statements, including Belfast City Council which notably established a Brexit committee.

2018’s report also alluded to the continued absence of a Stormont Executive, which has been in a state of collapse since January 2017. The Auditor draws parallels between the work of councils and the publishing of an Outcomes Delivery Plan by the Executive Office, which was described by Head of the Civil Service, David Sterling, as a document which “sets out the actions that departments will take to give effect to the previous Executive’s stated objective of improving wellbeing for all by tackling disadvantage and driving economic growth”. 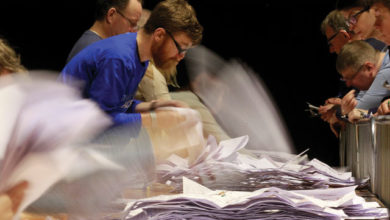