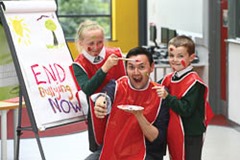 The Northern Ireland Anti-Bullying Forum (NIABF) is an inter-agency regional forum, bringing together over 25 statutory and non-statutory sector organisations, promoting a coordinated approach to tackling bullying in our schools and in our communities. The Forum is hosted by the National Children’s Bureau (NCB) Northern Ireland and funded by the Department of Education.

Despite levels of bullying behaviour having remained constant during the past decade, the types of bullying that are taking place have changed greatly. This is possibly most clearly evident when we look at cyber bullying and the increased rates of young people experiencing bullying online and through mobile phones. Research from the Department of Education (The Nature and Extent of Bullying in Schools in the North of Ireland, 2011) found that 17 per cent of pupils in Year 9 had experienced cyber bullying, making it now one of the five most common forms of bullying amongst our pupils.

It is also important to recognise the increased diversity amongst our young people and explore how we can support them to understand and embrace this diversity. Tackling bullying that is motivated by prejudice has become an essential part of the work of NIABF.

In September 2013, the Minister for Education, John O’Dowd MLA, invited NIABF to undertake a review of anti-bullying legislation, guidance to schools, effectiveness of anti-bullying policies in schools and the support available through the five Education and Library Boards. Throughout the review process, the Forum members found that legislation and guidance do not go far enough in many respects. Consequently, practice across schools is often inconsistent both in terms of the content of the anti-bullying policies and also the measures taken to respond to bullying behaviour.

It is clear that existing guidance to schools (e.g. Promoting Positive Behaviour, 2001) is outdated and in need of comprehensive review. This is particularly pressing given the emergence of new and complex types of bullying, such as cyber bullying and prejudice-based bullying. Guidance to schools by the Department of Education should be revised and updated immediately and further reviewed on a regular basis.

As part of this review, the Forum identified four key areas for development most urgently requiring the Department of Education’s focus:

1. Schools should be required, through legislation and guidance, to have a strong and robust anti-bullying policy which:

* includes a consistent definition of bullying

* addresses a range of forms of bullying

* sets out the responsibilities of all stakeholders, including school staff, pupils and their parents/carers

2. Schools should be required, through legislation and guidance, to record centrally details of all incidents of

bullying behaviour. Such records should include:

* details of the method of bullying (e.g. physical, verbal, cyber)

* an outline of the incident

* a report on the support offered to the child experiencing bullying

3. There is an urgent need for additional training and resources to be made available to schools as they seek to address new and complex forms of bullying. This training must begin at the level of Initial Teacher Education and continue through in-service training for all school staff (teaching and non-teaching).

4. Finally, while the Department of Education has commissioned three large-scale research studies into bullying in schools here (2002, 2007 and 2011), there is a need for more relevant and up-to-date evidence, better reflecting the current situation in our schools.

In June 2014, the Minister of Education informed the Assembly of his intention to bring forward new anti-bullying legislation, as identified in the report. NIABF looks forward to working with the Minister and his officials to ensure that any such legislation and guidance places the welfare of children at its core. Together we will make a difference – END BULLYING NOW!