Growing up in County Wicklow during the 1970s and 1980s, the journey to Belfast was always a challenge as we came north to compete in various sporting events. Although 100 miles or so from Dublin – it always felt as if we were about to embark on a “safari”, writes David Gavaghan.

In my early childhood, I have fond memories of the tortuous journey with my parents from Nairobi to Mombasa – now that was a safari. In many places no tarmac roads and plenty of wildlife. Of course, there were no border checks but that is a story for another day.

Today the road between the two principal cities on the island of Ireland has been transformed (and indeed in Kenya too). Sadly we ‘choked’ by not committing to deliver motorway standard to Belfast from the border. Arriving in Northern Ireland in 2004 to head up the Strategic Investment Board, I now regret my failure to address this matter. Rest assured the famous aphorism of Tom Sawyer rings in my ears:

“Twenty years from now you will be more disappointed by the things you didn’t do than by the ones you did do. So throw off the bowlines.

“Sail away from the safe harbor. Catch the trade winds in your sails.

As I approach three score years, I think about my existence on this planet 20 years from now, however foolish that may prove. And although climate change was already firmly on the agenda of businesses and governments more than 20 years ago, it now finally appears that the world is waking up to the reality of the devastation that climate change might reap as we approach the chimes of 2020. Planet earth is on AMBER/ RED alert. Eradicating carbon by 2050 from our landscape, our seas and our skies is now becoming a universal watchword. Commendable as the UK’s recently announced position is, many of us fear that this is too little, too late.

The metaphorical and literal ditching of the internal combustion car confronts each and every one of us. Finding the best ways to travel free of the blight that carbon inflicts on our planet will become a daily necessity/challenge. The economic landscape of Ireland has changed out of all recognition since my arriving here from Africa in 1973. Ireland is now one of the richest countries in the world and the eastern corridor of Ireland now competes effectively at many levels on a global stage.

However, our rail infrastructure lags far behind the delta of that economic change. Indeed it is a laggard. We can no longer ignore the damage that it is inflicting on our long-term economic performance, our social discourse and our environmental footprint. Neglecting to invest in this strategic part of Ireland’s infrastructure is no longer an option for neither the Irish/UK governments (nor the EU). As is happening in Britain, there is an urgent need for a radical investment programme in rail.

Two years ago I addressed the MacGill Summer School in Glenties on a platform with Mary Lou McDonald, Edwin Poots and Katy Hayward. My central thesis was we need to bring the island closer together. Rail in my view is the means to achieve this aim. Not only is there the opportunity to improve the journey time between the two principal cities on the island of Ireland to a globally competitive standard but also to attend the necessity for electrification as well ensuring resilience and in particular the vulnerability of the line to rising sea levels. These two issues alone could have a very major determinant on the scale of the project. 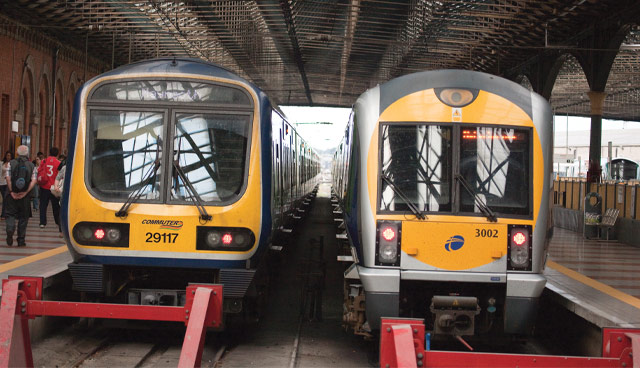 Travel times have always weighed heavily in the analysis of the respective rail authorities. This however, might become a secondary issue if in fact climate change literally alters the lie of the land and major investment has to be undertaken to meet what some have called the greatest challenge of our times. Interestingly, one of the largest professional firms in the UK has just issued a fascinating document stating that “climate change is likely to drive some of the most profound changes to businesses in our lifetimes”. That’s progress.

Another factor that has emerged in the last two decades (and will possibly accelerate) is the increased population on the island of Ireland. This is likely to be relatively concentrated along the eastern corridor. Today the island’s population is approaching 7 million (6.7 million with 4.8 million in the Republic of Ireland) and it is anticipated that in the Republic of Ireland the population will grow to 5.9 million by 2050, an increase of 22.9 per cent.

Marc Coleman, an outstanding economist and commentator, has recently posited that if the population of Dublin was to grow by twice this rate from the census of 2016 to 2050 then Dublin’s population will grow from 0.554 million to 0.81 million. The dynamics in Northern Ireland are not currently as exciting. But let’s just assume that Belfast’s population mirrored this growth rate; the population of Belfast would reach that critical level of 0.5 million. (0.487 million). The next largest city on the island of Ireland would be Cork at 0.18 million – just under 200,000. The prospect therefore is that along the eastern corridor there could be somewhere between 2.5 million to 3 million people and of course this will greatly challenge the existing infrastructure.

So let me draw the strands of the argument together for why investment in our rail infrastructure is required, first between Belfast and Dublin and then between Dublin and Cork. Internationally if we were to achieve the average speed now being attained in China at just over 300 km, then the travel times would be just over 30 minutes in the case of Belfast to Dublin and just under 50 minutes in the case of Dublin to Cork. Imagine the possibility that you could leave Belfast and be in Cork in under two hours (and that might include a switch of stations in Dublin).

We need to bring the island closer together. Rail in my view is the means to achieve this aim.

But as outlined earlier perhaps there are other issues that will drive this investment programme to happen. Climate change, with all its ramifications, is perhaps the driver that I had not first contemplated when I set out on this journey some years ago. The need for a modal shift from the car as part of Ireland’s undoubted ambition to clean up its ‘dirty’ act could be the lynchpin.

Then there is the changing demographics and the need to get more people more readily into and out of the two economic and cultural powerhouses on the island. One also cannot ignore the surge that tourism is bringing to the island let alone the burgeoning entrepreneurial climate in the border areas. Businesses such as Norbrook Laboratories, STATSports, First Derivatives and MJM Marine are thriving and competing in a global market. Their challenge is to attract talented people to work in the border regions. Good transport links are critical for this.

So my dream is having thrown off the bowlines and sailed away from the safe harbour catching the trade winds in my sails that in 20 years’ time, I will catch the 5.20pm train from Weavers Cross, Belfast’s thriving entrepreneurial transport hub and arrive within the hour at Dublin’s sparklingly new terminus station to meet my old school friends for an early supper. We will then see a brilliant Brian Friel play at the Abbey Theatre followed by a night cap in one of my favourite Dublin watering holes. And be back in Belfast tucked in my bed just after midnight.

If that dream comes true then I can rest easy with my previous failure to attend to a motorway north of the border. Even better, I know that this time we have not damaged the environment and that the next generation and all future generations will have a cleaner, brighter, more connected future. Now that is some dream. I hope we can make it happen.