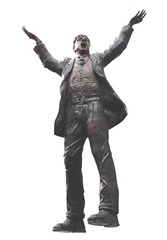 Writing a £7.20 living wage into public procurement contracts could make life better for the most vulnerable employees. John O’Farrell sets out alternatives to zero hours conditions.

There are days when reading the newspapers feels like staring trough the wrong end of a telescope. When the PwC Economic Outlook was published on

14 August, the authors offered alternative possible headlines about the housing market or average earnings. Guess which angle the local papers went for? Property prices, and how they face another decade in limbo.

The alternative headline would have given the readers the dramatically simple reason why the housing market is dormant. “Housing affordability is only partly driven by price, with a major barrier to real recovery being the reduced availability of cash and credit,” write the PwC economists, who then note that real wages have fallen by almost 10 per cent since 2009.

Northern Ireland bumps along the bottom of every dataset: gross disposable household income; private sector wages; full-time wages for men; numbers of economically inactive, and other measures of misery.

We also top the league for workers on zero-hours contracts, workers with no pension provision and workers in hock to pay-day loan companies. We are also more likely than people in any other UK region to spend almost every penny we bring home.

All of the above are linked. People are paid less than they can afford to live on. The minimum wage is too minimal and too many employers treat it as a ceiling and not a floor. Add to this the spread of zero-hours contracts and you have a very large slice of the workforce who literally cannot plan a week ahead.

This is not a ‘lifestyle choice’, but it is about ‘chaotic families’ – those with chaos thrust upon them. A mortgage is a pipe dream for most people under 35 and you cannot have a housing market which consists of older people swapping homes.

Zero hours contracts only assist the sort of boss who likes to keep ‘his’ workers on their toes. If anyone asserts that zero hours suit workers as well, ask then why is it that the places which use them tend also to pay minimum wage? Why are they not rampant in the professions (apart from journalism, where such practices have been viral for years)?

What happens if you do not get enough hours to pay your basic bills? Why, you can visit your local pay-day loan shark (there are several on most main streets in poorer areas), but you are gambling that you get enough hours next month to cover your bills, and then your loan, and then the extortionate interest on that loan.

Meanwhile, there are employers’ groups running around claiming that what we need to kick-start the economy is to change the law so that bosses can sack people more easily and make appealing unfair dismissal expensive and ruinous. This nonsense gets a regular hearing because we have a comforting myth about small businesses being the ‘backbone of the economy’.

We need to encourage good employers and reward innovation, and we should take the advice offered in 2009 by Professor Richard Barnett that we have been competing with Bangalore – and losing.

All of the weaknesses identified by the Northern Ireland Executive’s 2011 Economic Strategy have magnified, especially the observations that “much of job growth has been in low wage services” and that too much foreign direct investment is “in low value sectors”.

We can make a start on wages, by ensuring that each public procurement contract to the private sector is conditional in payment of the living wage of £7.20. One-fifth of Northern Ireland workers are paid less than that.

Even a modest increase in the minimum wage to 2009 levels would increase it from £6.19 per hour to £6.60. This would not break the bank of any decent employer, and it may be a start in reversing the long-term shift in the share of the UK economy away from wages and towards profits. The share going to wages is now 5.5 percentage points lower than it was in the late 1970s, a ‘wage gap’ equivalent to around £85 billion in today’s prices.

There is one more thing which has been proved to fix the problem of low wages – collective bargaining and greater trade union density, or the proportion of the workforce in unions, which is down to around 14 per cent in the UK private sector.

It is often and ignorantly asserted that unions are ‘irrelevant’ to the ‘real’ economy. But when you examine the workplaces that are free of them, it is clear that unions are essential, not just for workers, but for a healthy and just economy. Investing in the future