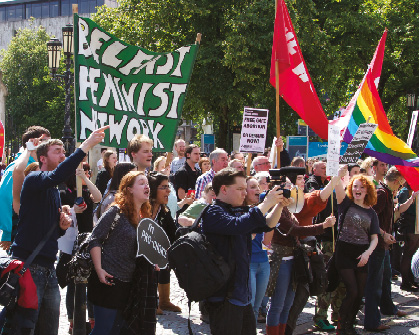 Backbench Tory support for a Labour proposed amendment that would offer women in Northern Ireland seeking abortions in England the same NHS support as their counterparts in the other regions forced the first post-election government U-turn.

Although initially opposed to the idea of altering the rights for women in Northern Ireland, travelling to England for an abortion, to have their procedure funded by the NHS, the Conservative Government opted for a policy change rather than risk its first defeat in the House of Commons.

The decision does not change the law in Northern Ireland, which is regarded as one of the most restrictive in Europe, where abortions are only granted if there is evidence that a female’s life is at risk or there is a permanent or serious risk to her physical or mental health.

A heavy source of contention between pro-life and pro-choice groups, rape, incest and fatal foetal abnormalities are not considered grounds for abortion. Instead, women who wish to have the procedure, previously had to travel to England and pay privately.

It’s estimated that over 700 women travelled from Northern Ireland to have an abortion in 2016, with some senior figures costing each procedure at around £1,400.

In proposing that Northern Ireland women are given the same NHS backing when in England as other UK citizens, Labour backbencher Stella Creasy argued that to continue with the status quo would be to deny the poorest people lawful abortions.

Creasy received largely cross-party support in her proposed amendment to the Queen’s Speech debate – often seen as a vote of confidence in the incoming government.

However, in the face of a potential defeat if a handful of Tory MPs rebelled, the Government announced that it would “intervene to fund abortions in England for women arriving here from Northern Ireland” and the amendment was withdrawn.

The Government estimate the cost of the decision to be around £1 million annually but would fund in excess of this if needed.

The decision came on the same day when Belfast’s Court of Appeal effectively overturned an earlier ruling that the current abortion laws were incompatible with human rights laws, when it stated that abortion law in Northern Ireland was a matter for Stormont.

Although currently supporting the Conservative Government with their 10 MPs in a supply and confidence agreement, the DUP, who were set to vote against the amendment, were largely quiet on the outcome.

Speaking in Westminster, DUP MP Ian Paisley Jr simply said: “I think it is important the house recognises this is not a matter for Belfast. This is a matter for NHS England.”