Over £700 million will need to be found over the next five years if the Department of Health is to follow through on a plan to tackle Northern Ireland’s waiting list crisis.

In a strikingly similar elective care plan to that published by then Health Minister Michelle O’Neill MLA in 2017, just weeks before the Northern Ireland Executive collapsed for over three years, Minister Robin Swann MLA committed to eradicating the gap between demand and capacity for elective care by March 2026.

O’Neill’s plan to tackle waiting lists and reform the health service failed to secure the necessary investment and since then, the number of people waiting over a year for their first outpatient appointment have multiplied significantly.

Swann says that the plan should mean that by March 2026, no one should be waiting more than a year for a first outpatient appointment or for inpatient or day-case treatment, or more than 26 weeks for a diagnostic appointment. However, he has also acknowledged that there is “no realistic possibility” of reducing waiting lists to an acceptable level without significant additional funding of over £700 million in the next five years.

That challenge alone is significant when considering that Northern Ireland has not had a multi-year budget for a number of years, despite a commitment to introduce one in the New Decade, New Approach agreement of January 2020.

Department of Health figures indicate that the amount of money dedicated to tackling waiting lists has fallen since 2014. However, the necessary levels of investment are unlikely to be found from the Executive’s existing block grant, of which health already takes up almost half.

With savings unlikely to be made from an already strained budget, the emphasis will be placed on Westminster to provide additional monies. How likely that is remains to be seen.

Northern Ireland has the worst waiting lists of any region of the UK, providing grounds for a case to be made for ring-fenced funding but, the UK Government will face opposition from other regions if this is done outside of the Barnett formula process, meaning potentially significant investment increases in England and the other devolved regions.

Early indications are that the UK Chancellor intends to increase health spending in his upcoming spending review this Autumn, however, the review is expected to be ‘tough’ as the Chancellor seeks to reduce a £300 billion deficit.

In June 2021, Finance Minister Conor Murphy MLA told the Northern Ireland Assembly that Chancellor Rishi Sunak had indicated to him plans to announce a multi-year spending review and said that this was the basis for preparations by the Executive for a multi-year draft budget.

Murphy added that within the Executive, he would be arguing for priority to be given to health to assist tackling the waiting list crisis and to fund longer-term transformation.

Swann’s Elective Care Framework contains a range of short-term, medium-term, and longer-term actions. The challenge to secure continuous funding over the next five years and beyond can be seen in the context that the Minister had to rely on £30 million of additional funding from June’s monitoring round (non-recurrent funding), to begin some of the plan’s work.

As well as funding, another major challenge facing delivery of the framework is workforce capacity. The Framework points to the necessity for £121.5 million over five years for training and recruitment, a significant investment, which is expected to be recurring. 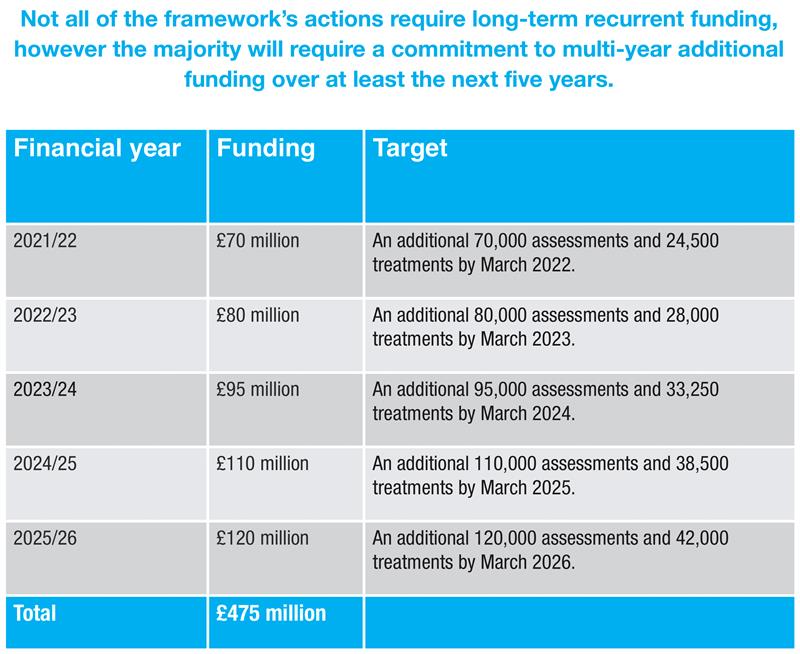 Some key inclusions in the framework include:

• a cross-border healthcare scheme, replicating arrangements ended by Brexit, which allows patients to get treatment in the Republic of Ireland’s private sector and be reimbursed by Northern Ireland’s HSC; and

• by September 2021, megaclinics for orthopaedic outpatients, cataract assessments and a range of pre-operative assessments.

• by March 2022, proposals will be brought forward for a rapid diagnostic centre/centres for Northern Ireland;

• a redesign of endoscopy services, potentially including a new regional endoscopy centre; and

• a move towards a seven-day working week for hospital theatres; and

• a switch in waiting times measurement, mirroring the rest of the UK with a referral to treatment measurement.

In announcing the framework, the Minister said that “we are beyond the point” where debate on whether or not the HSC should routinely use independent sector providers to deliver HSC care is “helpful or relevant”.

“We will need all the additional capacity that we can get, in-house and in the independent sector, for the foreseeable future,” he stated. Swann added that he has asked the Health and Social Care Board to make recommendations by December 2021 on medium-term contracts to lease theatres to independent providers to treat HSC patients. Additionally, for the same timeframe, he has asked for proposals for medium-term use of independent sector providers to address backlogs, where it is demonstrated providers can provide value for money and the same standard of service as the HSC.

When asked in the Northern Ireland Assembly how much of the planned £700 million investment is envisaged to go towards the private sector, the Minister said at the time that he did not have a detailed breakdown of how much would go into the independent sector.

“It is about getting people seen as quickly as possible,” he stated.

The framework sets out a twin-track approach of investment and reform to ensure that “backlogs do not keep reoccurring”, including the implementation of “green pathways” to keep elected care services separate from exposure to Covid-19 and where possible, a separation between emergency departments and planned surgical hubs.

If the plan is to be successful it will require political stability, Executive support, and unprecedented investment, all of which are significant challenges in their own right.