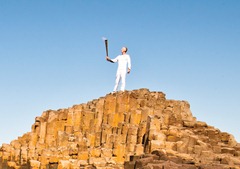 The Olympic flame began its 70-day journey around the British Isles on 18 May, including stops in Northern Ireland and Dublin (6 June). Following colourful celebrations in Belfast on day 19, the torch made its way across to Scotland.

Representing peace, unity and friendship, the torch is meant to bring the excitement of the games to everyone and to allow local communities to shine a light on the best their area has to offer. Despite scuffles between police officers and protestors in Derry on day 17, the torch was well received by cheering and enthusiastic crowds.
A total of 8,000 inspirational torch bearers were nominated by their communities to carry the torch.

“You are made feel very privileged, unique and special,” Gavin Bates tells agendaNi. Chosen to carry the torch across Derry’s Guildhall Square on the morning of day 18, Bates was nominated for his tireless charity work which included climbing Mount Everest six times. The founder of a charity called Moving Mountains, Bates has built orphanages, schools and clinics in countries such as Kenya, Nepal and Tanzania.

“As I was the first torch bearer that day, I got to light the torch from the original flame that was lit in Athens. There was something historical and very special about that experience,” he recalls.

The torch was picked up on day 16 (3 June) at Titanic Belfast by the first local torchbearer Karen Marshall, who was nominated for her voluntary work in her local community of Tynan, County Armagh.

Day 17 saw the torch being carried to famous landmarks such as the Giant’s Causeway, the Carrick-a-Rede rope bridge and Dunluce Castle with Culture Minister Carál Ní Chuilín “delighted” that it “has afforded us the opportunity to show these across the world on a stunning sunny day.”

Making its way to Newry on day 18, the torch passed through 21 towns and villages including Omagh, Enniskillen, Armagh and Portadown.

Enniskillen couple Derek and Yvonne Bowles were the only husband and wife to carry the torch in Northern Ireland. Recognised for their fundraising commitment to the Horizon West children’s hospice, they were supported by “tremendous crowds.” Derek tells agendaNi: “It was a pity about the weather but it didn’t dampen the spirit of the day.”

Medal winners at the 1992 Barcelona Olympics, Belfast’s Wayne McCullough and Dublin’s Michael Carruth, conducted a cross-border handover at dawn on day 19 (6 June). The torch was officially welcomed by President Michael D Higgins at the Olympic Council of Ireland headquarters in Howth before making its way around Dublin.

President of the Irish Olympic Committee Pat Hickey referred to the torch coming to Dublin as “a unique piece of history” which took three years to negotiate. As Team Ireland consists of athletes from Northern Ireland, organisers agreed to allow the torch to go outside its territory on this occasion.