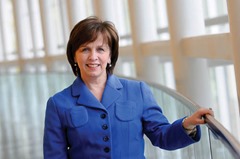 Diane Dodds discusses the varied work of an MEP with Peter Cheney and outlines her case for a referendum on the UK’s membership of the European Union.

With Europe rising up the political agenda as the general election approaches, Diane Dodds emphasises that a referendum on the UK’s EU membership is a political necessity.

“Even if you are the most ardent Europhile or the most ardent Eurosceptic, what this nation needs is a debate about our place in Europe and how we take that forward,” she comments. The party opposes the EU in its current form which she characterises as “encroaching federalism” but wants trade and good diplomatic relations with European neighbours without an “intrusion” into national affairs.

Regardless of how the general election unfolds, Dodds expects that a move towards a referendum will be the general direction of policy: “I don’t think that political parties will get away with ignoring the question of Europe.”

She does not want to predict the date or outcome of the referendum but warns against “scare stories from either side.” For example, Dodds dismisses the narrative that millions of jobs will be lost if Britain were to leave the EU. The UK receives more exports from the euro zone than any other country – and more than the BRIC countries combined.

She affirms: “What we want is a sensible, rational debate which actually energises our people and leads us to a resolution and a conclusion on the issue.”

The UK’s only European referendum to date was in 1975 with 67 per cent of votes choosing to stay in what was then the Common Market. The margin of support was 52 per cent in Northern Ireland.

Pressed on the point that referenda are uncommon in British politics, she replies that no UK voter aged under 58 has had a say on its relationship with the EU. “While we in the DUP hold to the mantra that matters of national importance should be dealt with by our sovereign Parliament at Westminster, we also feel a precedent has been set to allow a public referendum on Europe.” Dodds adds: “It is only right, therefore, that people in Northern Ireland get the chance to judge what has changed since then.”

While long-distance travel between Northern Ireland, Brussels and Strasbourg is a downside, Diane Dodds sees the wide range of opportunities which she has from being an MEP as one of the most interesting aspects of the role. Being one of three local MEPs in a chamber of 751 MEPs is “an enormous challenge as well as an enormous responsibility and privilege,” she notes.

Farming and fisheries take up a considerable amount of her office’s time. She sits on the Agricultural and Rural Development Committee and Fisheries Committee and also on delegations for relations with Canada and China, with a view to opening up more trade with those markets.

Dodds, though, views her main achievement as “getting more money back from Europe and down into communities.” She pioneered a series of public meetings with community groups and churches and is pleased to see a Peace IV programme being put in place.

On the day before the interview, Dodds had been working with community groups at Stormont to navigate the application process for the European Social Fund which aims to improve employability and education among vulnerable groups. Being a teacher, in Laurelhill High School in Lisburn, gave her a passion to see “hard to reach” communities participating in education and she wants to see the fund used effectively for that work.

A strong critic of federalism, she dismisses the euro as ineffective given the different economies and rates of growth across its 19 members. She is pleased that some of Europe’s banks have recovered and are better placed to withstand economic challenges but she adds: “We have all the underlying problems of stagnant, old economies bound together by a euro that is in a lot of difficulty.”

The “very turbulent times” facing the continent are compounded by the Greek situation. Any resulting volatility has an impact on the Northern Ireland as a weaker euro and stronger pound makes it harder to export into the European market. The real fear in Brussels is that if Greece can renegotiate its terms, other countries will follow suit.

Religious freedom is one of her most pressing priorities and the recent killing of Coptic Christians in Libya is fresh in her mind. Closer to home, she is troubled by the rise in anti-Semitism throughout Europe, particularly the recent attacks on Jewish people in Paris and Copenhagen.

“Most people talk about Paris in terms of the attack on freedom of expression but this was a direct attack on the Jewish community in Paris and we all need to stand together in the face of that,” she remarks.

“The pressing role of local and national governments, as well as the EU institutions, should be to send a strong message to those of a Jewish faith that they are welcome in our society. This should also be about be education, and I am currently working with some local projects which stand to raise awareness of the need for religious tolerance across Northern Ireland.”

Dodds works closely with the advocacy group Open Doors and helped to organise a visit by persecuted Christians from Northern Nigeria to the Parliament. “It is only now really that it is becoming nationally prominent but it has been going on for a number of years,” she comments, “and if that were in a European country and not an African country, would we have turned the same blind eye to it?”

Diane joined the DUP whilst studying history and English at Queen’s University Belfast. She came into elected politics in 2003 when she was elected MLA for West Belfast, the first unionist to represent the constituency since 1986. Diane was then elected to Belfast City Council in 2005 and the European Parliament four years later.

Her husband, Nigel, has been MP for North Belfast since 2001. Spending a lot of time travelling – and away from her family – is the least enjoyable aspect of her role “but in life you choose paths and you try to balance your life as best as you can.” She looks forward to relaxing and spending time with her new grandson at the weekends.