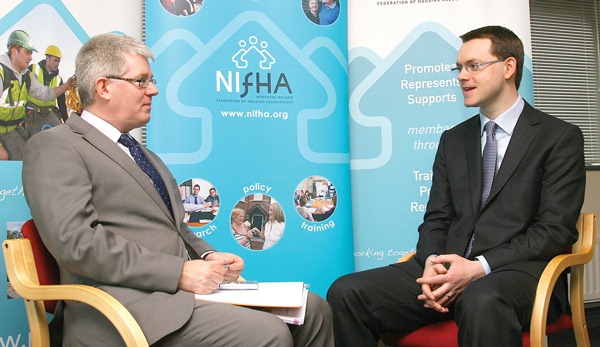 “The housing association movement is at a key point in its development,” says incoming Chief Executive Cameron Watt.

There are major challenges ahead including an increasing waiting list for social housing, decreasing government funding and welfare reforms such as benefit cuts and a ‘bedroom tax’.

“We’ve got 40,000 people on the waiting list, 21,000 in acute housing need, an ageing population. That’s a lot of vulnerable people who require good housing, care and support,” Watt points out. “We’ve got major challenges in working with our partners in DSD, the Housing Executive and others to meet that steadily growing housing need.”
However Watt emphasises that housing associations are up to this task and are adapting to changing circumstances. “As well as providing good quality social homes, which is the bread and butter of our members’ development, there’s a real enthusiasm and appetite among housing associations to deliver a much broader range of housing options [such as] social rented homes and affordable homes for people who have been priced out of the open market,” Watt explains.

Co-ownership’s part-buy-part-rent scheme is a huge success and other housing associations are looking to develop new build homes for shared ownership, shared equity and out right sale.

“There are also opportunities for housing associations to deliver a broader range of housing options for older people, perhaps including owner-occupiers who want to downsize,” Watt adds.

Fold Housing Association’s involvement in a consortium providing telehealth services is one initiative that will allow older or vulnerable people with chronic health conditions to remain in their homes for longer.

NIFHA “wants to support the housing association movement to continue to deliver high quality social rented homes, specialist and supported accommodation and a broader range of housing options, not just for those in acute need, but for the whole market,” Watt insists.

However, government funding is decreasing sharply. “For the last few years, government funding for each new social home has reduced by at least 5 per cent each year, and this year we are facing an unprecedented and unsustainable cut of over 10 per cent.”

“Government is looking to us to bring in more competitively priced private borrowing and to work more efficiently and in different ways,” Watt notes. NIFHA is committed to doing that and is working with its members, DSD and the Housing Executive to make the procurement and building of new social homes simpler and more cost-effective.”
The Programme for Government commits to delivering 8,000 social and affordable homes by 2015. However, he believes there are “real and serious limits to how low you can drive the level of government investment without really seeing delivery fall off in a major way.”

“We want to work with the Department to review that level of government funding to ensure that they can meet their objective of driving efficiencies in procurement but that our members can work with grant rates that allow them to deliver the new homes that are asked of us and also to remain as strong and financially viable organisations.”
Watt also urges the Department for Social Development to establish better and closer working links with the Department of Health, Social Services and Public Safety and the health trusts. Housing associations are currently finding that upon building high quality specialist and supported housing schemes for vulnerable people, commissioners “are not following through with the revenue funding to provide the care and support which is absolutely vital for these people.”

The UK Government’s plans for the most radical shake-up of welfare reform since the 1940s “is going to present “huge challenges” to individual tenants and to housing associations’ ongoing financial viability.

NIFHA has been encouraged by Minister McCausland’s willingness to listen to its concerns about direct payments. It hopes that legislation, expected to be brought before the Assembly shortly, will ensure that housing association tenants will continue to have the right to have their rent paid direct to their landlord under Universal Credit.

The ‘bedroom tax’ will severely cut the amount of housing benefit that people can get if they are deemed to have a spare bedroom in their Housing Executive or housing association home. This, he says, will “push some of the most vulnerable and hard-up people from just about making ends meet into severe hardship.”

Watt is determined to work with DSD and NIFHA’s members to fully quantify the potential risks to tenants and landlords and to ensure the legislation includes measures to mitigate the risks.

While the Department has referred to increasing discretionary housing payments, “that pot will run out very quickly,” Watt states.

“We’ve got a good and compelling story to tell about the contribution we are making in meeting social need and supporting jobs and economic activity in Northern Ireland,” he says.

“As the private housing market and new build side has shrunk, the proportion of new homes in Northern Ireland that are being delivered by housing associations in partnership with government has increased.” During the 2011-2012 financial year, 2,053 homes were delivered (i.e. 1,410 new social homes and 643 co-ownership homes).

“We are not just meeting social housing need,” he insists. “We are also making a massive contribution to the economy.”