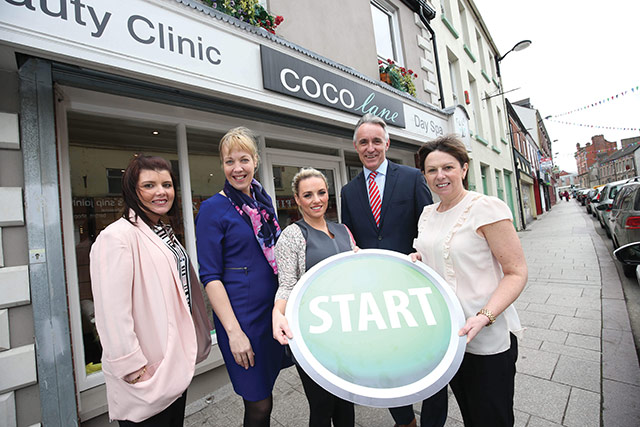 Almost three years after launching her own business, beauty clinic and day spa owner Ciara Gartland says that sleepless nights and working weekends go hand in hand with not only starting a business but making sure it runs smoothly too.

Last month 33-year-old Ciara Gartland held a launch night at her Coco Lane Beauty Clinic & Day Spa in Armagh for a new make-up range. The night itself was a success and also a telling point in the extent of the expansion of the business since it opened its doors on Upper English Street two and a half years ago.

A qualified beautician Gartland learnt her trade working for a spa in Guernsey and taking in training courses across the UK before settling in Portadown where she worked for a business for almost a decade. However, she always harboured ambitions to return to her home city in Armagh and after developing a loyal clientele and establishing viable locations, she decided to open her own business.

“It wasn’t easy. I knew I had done the ground work in terms of my training and experience but I didn’t know where to start. I went to the Armagh Business Centre who provided me with a sample business plan and helped me with the figures but there was still a lot of work I had to do myself to put it together. It was a big risk, Invest NI gave me around £1,000 but the rest was money I had to borrow through the bank and credit union. I was panicking and I did question many times whether I was doing the right thing to the extent that I asked my former boss if she would give me my job back if it didn’t work out,” said Gartland.

The Regional Start Initiative, where she developed her business plan is an initiative delivered through Invest NI under the remit of the 11 new councils and has helped over 3,000 new start-ups produce business plans every year.

Despite putting a lot of work into drawing up an extensive business plan, when presenting it to the bank, Gartland could only secure half of the loan she had requested. “Anyone who thinks being their own boss and starting up a business is easy is wrong,” she explained. “There is a lot of self-sacrifice and work goes into those early stages and even beyond. You need a good supporting network, not just within the business community but also from family and friends. When I opened up I didn’t have one day off for two years because I put in every hour. I had to decline wedding invitations and miss out on family occasions. Two and a half years on I’m still working six days a week but it’s all worth it.”

A measure of Coco Lane Beauty Clinic & Day Spa’s success is its expansion. Originally employing one other member of staff, Gartland now employs five therapists, including herself, and a receptionist. She believes that a successful business should be constantly evolving. “This line of work is competitive and you’re easily forgotten if you can’t keep up with the latest demands and supplies. We’re constantly researching and implementing new treatments and new ranges. We’re still a young business but for the future I’d like to see us expand our spa to something bigger. Armagh is a busy city and we have a bustling and friendly business community around us. Hopefully the business can expand and grow.

“I believe it was the right decision for me and anyone thinking about starting their own business should use some of the resources available to help. The right guidance can give you a clearer sense of what the task ahead is or point you in the right direction but ultimately it’s going to be yourself and your supporting network that gets a business off the ground.”

The Regional Start Initiative is now under the remit of the 11 new councils and is delivered by the by Invest NI, Enterprise Northern Ireland and the Local Enterprise Agency network. Now in its fourth year the scheme helps produce over 3,000 business plans annually and has recently announced plans to help around 3,000 business people in the Armagh, Banbridge and Craigavon areas secure funding from banks and other potential investors. Despite helping companies to launch in a range of sectors, there has been notable increase of businesses entering the leisure, food and creative industries.