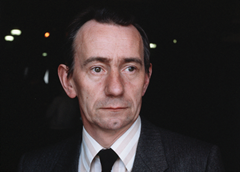 Peace has a price, as Oliver Napier knew well after yet another gun attack or surveying his burnt out farm. Those sacrifices, though, confirmed to him and his wife, Briege, that they were on the right track.

A middle-class Catholic solicitor, he joined the Ulster Liberal Party and New Ulster Movement before co-founding Alliance in 1970. He was initially its co- leader, alongside Bob Cooper, before becoming the sole leader in 1973. In the same year, he was elected to the new Assembly for East Belfast.

Napier maintained his commitment to moderation, non-violence and power- sharing throughout the darkest days of the Troubles.

The Sunningdale Agreement proved that a solution based on those principles could be achieved. Napier briefly served as Legal Minister in the 1974 Executive, which foundered in the Ulster Workers’ Council strike, led by Ian Paisley. To save the administration, he proposed a compromise over the Council of Ireland but John Hume was opposed.

Hume and Paisley would be credited with much later political breakthroughs, and with hindsight may have chosen differently. Napier, though, kept a shared government on the negotiating table.

Napier also represented the Victoria area on Belfast City Council (1977-1989) and contested the European poll in 1979. His political career moved to North Down, as a Northern Ireland Forum member (1996- 1998) and candidate in the 1995 by- election and 1997 general election.

A knighthood rewarded his work after stepping down from the party leadership and he lived to see three ambitions fulfilled. Firstly, the Good Friday Agreement re-established power-sharing and devolution. Alliance then re-entered government in 2010. Finally, he was thrilled to see Naomi Long win East Belfast and close that circle 31 years on.

His motivation was drawn from an unwavering commitment to politics and a firm Christian faith. The latter gave him a burden for the least in society and to see people reconciled.

A wry and jovial man, he could also be shrewd and ruthless. The Old Firm was “naked sectarian hatred, fantastic,” he joked after his first match, later in life. When the blackened farm went up for sale, he advertised the locals to whom it should not be sold, daring the suspects to sue him. Responding forensically to a Minister’s speech on internment, he finished each point with “what bloody arrogance.”

It is to his credit and Northern Ireland’s benefit that he foresaw an answer to violence and kept that resolve. Tributes from his party colleagues were echoed across the political spectrum.

Sir Oliver is survived by his wife, three sons and five daughters, and was predeceased by a son who died in infancy.