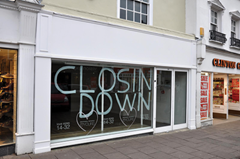 Various economic commentators paint a bleak picture for Northern Ireland’s retail sector but the Executive is attempting to intervene.

Anecdotal evidence shows that independent retailers are struggling with rates, a lack of consumer confidence and more out of town shopping. On the other hand, large UK and international retailers such as Tesco, Asda, Sainsbury’s and Marks and Spencer are doing well and are keen to increase their presence. Recent entrants to the Northern Ireland market are H&M, LK Bennett, Decathlon and Home Bargains, while a proposal by John Lewis to build at Sprucefield is undergoing a public inquiry. Opponents claim it will detract shoppers from Lisburn city centre.

The region’s wholesale and retail sector has experienced continued decline since Quarter 4 of 2009. Since Quarter 1 of last year, it was the sub-sector which recorded the greatest fall in the Northern Ireland Index of Services, decreasing by 5.4 per cent, compared to an increase of 2.5 per cent in the UK.

Output remains “flat or declining” in the public sector, construction and retail, according to the PwC March 2011 Northern Ireland Economic Outlook. Retail took hits this winter when the freezing weather conditions affected the transport of goods and resulted in fewer shoppers. The VAT rise from 17.5 to 20 per cent in January 2011 also dealt the sector a blow. There may be a bounce back from those in the short term, the PwC report contends. However, in the longer term consumption growth is likely to be very constrained and public sector pay cuts or job losses could have a negative impact.

A March 2011 economic briefing from the Assembly’s research department said the overall economic outlook remained “challenging, to say the least.” The UK Government’s spending cuts were yet to hit the region. It would also be vulnerable to increases in interest rates, “which are looking increasingly probable in the short to medium term.”

In June, the Department of Finance and Personnel announced a consultation on the extension of the small business rates relief scheme (to be paid for by a large store levy.) It would mean 26 companies with 77 retail premises paying an extra £85,000 a year in rates per premises. This would equate to an average rates saving for small businesses of around £750.

Currently, the small business rates relief scheme allows smaller businesses across Northern Ireland to receive a rates reduction of up to 50 per cent if the property has a net asset value (NAV) of up to £2,000, and 25 per cent relief for eligible properties with an NAV of between £2,001 and £5,000. Under the proposed new arrangements, it is expected that the amount of rates relief available will be doubled, preferably by April 2012.

In contrast, Jane Bevis, Director of the newly established Northern Ireland Retail Consortium (which represents the supermarkets), argues that the levy “risks damaging the reputation of Northern Ireland as a place to do business” and that it contradicts the case for devolving corporation tax.

“We agree small retailers need a helping hand [and] town centres need investment and regeneration. But the large retailer levy, which will also apply to large stores on the high street, could make things worse for everyone,” she said.

Sammy Wilson has emphasised the importance of the independent retail sector saying that “they are often at the heart of local economies in cities and towns … and are a source of much needed employment while contributing significantly to the local character of many areas.”